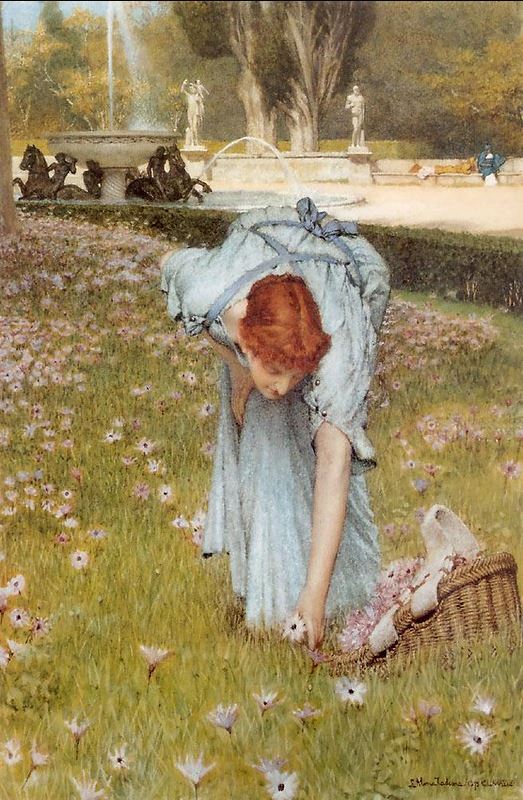 Spring in the Gardens of the Villa Borghese, Sir Lawrence Alma Tadema

Since we were in Rome, of all places,

John Keats was quite substantially

On our minds, and Abe observed that

The younger you die, the greater

The mythic burden each increment

Of time’s expected to sustain.

Therefore, if you die in infancy,

What sort of god do you become?

Oh, the panoplies all sing & strut,

Everything so real, devoid of rust!

Then I read the Times. It breaks a seal,

There is sorrow found in finding that

The Eternal is a package deal.

“Of you, dear friend, what can one say in such dismal times? In the old days, you’d have had the fame of Aristarchus, say, or of Zenodotus, eminent men, those Alexandrine scholars.”—Ausonius, “Citarius, Sicilian of Syracuse, Greek Grammarian at Bordeaux”[2]

“I repeat: this firehouse will save

Lives,” declares the mayor on the site.

Festive bunting stapled to the height

Points to what this building will have meant.

In a random-seeming corner of

Newly-sodded lawn: a disk of white,

And surrounding it are pillars, three,

Meant to seem not placed, but somehow grown.

And on each piazza-facing side

For a typographic megaphone

Fit for names of those who will have died.

Kvetching that another man who’s quite

Other silly names who no one can

Is the memory of meadow-rue.

Thought of its own things. Sufficient un-

To the day is the evil thereof.”

[1] From the Encyclopædia Britannica: “[A] 13th-century manuscript that contains songs […] and six religious plays. The contents of the manuscript are attributed to the goliards (q.v.), wandering scholars and students in western Europe during the 10th to the 13th century who were known for their songs and poems in praise of revelry. […] [T]here are drinking songs, serious and licentious love songs, religious poems, pastoral lyrics, and satires of church and government.”

PrevLet’s Bring Back HUAC
The American in UsNext