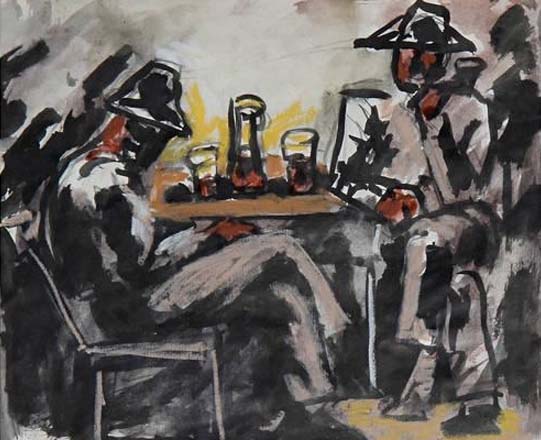 Under low cliffs (damp as trout),

Under the sky (a shark’s fin),

And, careening through the stout

Cory said he never had

(Regardless if I sat or stood)

Thought my posture at all bad—

Since my diction was so good.

Registers as a treason’s

Truth. Without it, the most blunt,

Substantial treasures one may

Find are the irrelevant

The nurse opens the results of my

Would prefer to be a Fact; I’m cursed

That the Cosmos is neither System

Nor Fact. “The Uncertain: What’s known to

“Known to everyone, just not to you.”

___________________________________
Jeffrey Burghauser is an English teacher in Columbus, OH. He was educated at SUNY-Buffalo, the University of Leeds, and currently studies the five-string banjo with a focus on pre-WWII picking styles. A former artist-in-residence at the Arad Arts Project (Israel), his poems have previously appeared (or are forthcoming) in Appalachian Journal, Lehrhaus, New English Review, and Iceview (Iceland).