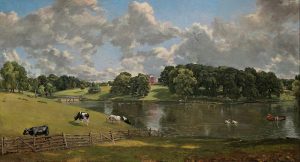 She went as she’d come, bygone girl of long since put

She seemed unhappy mostly, lonely, perhaps, on her wee

But meticulous in her housekeeping, and planning her

And, o’ yes, she kept us from starving when her man

Which, if you’d been her child, was something after all, as

If Jesus had had flatulence, picked his nose some, kicked a

but saved man on Golgotha…

that may go too far…

Though, if love is the measure of things, there was in her

an aside of glory…

Eloquence of heart amid the lesser texts of her penny

Found annotation on a dog-eared leaf of reminiscence,

molt left from a scold transmuted

Once this realm was home, where daisies told me secrets,

silks stroked tears of all my weepings…

Before Earth seemed cold, quicksilver pad I wrote on; ere

O’ then upon a time, self was minstrel seeking songs,

was middling dicing for its greatness.

Erst I lay serene with wanton hours, was sought (it

by importunities of promise…

Spoke well of by zephyrs in the willows, beloved of genial

transits by a sun,

…always the getting there not the there, the in-between of

I swore, to anyone who asked, that there were reasons for

Those nights beside roads: goals chased, prey or prophecy

But, really, sir, they were faux threshings of straw, feints

by self-respect for public eyes…

I felt, now-and-then, that I was exile by decree, brush

Stroke of a souldrop on a pane, off key note of jack-tar

not good for much save gandy dancings…

An itinerant refrain in (oh) a Georgia rain, ten miles

on my way to Savannah…

In the half-dawn drear of one day more without a name.