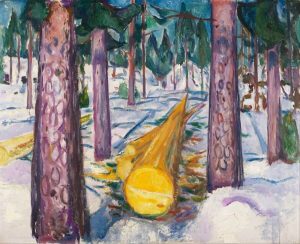 It was during a training flight that the discovery was made. The instructor and her young student were flying over a forest in Bavaria, when the latter was distracted by something out of the corner of his eye. Looking down to the green canopy he saw a giant swastika. Such was the novice’s reaction that the light airplane almost went into a spin, which was instantly corrected by his flight instructor. Nevertheless, he made several passes just to make sure.

It was definitely a swastika and it was in the middle of the forest, more visible at certain angles because of the position of the sun in the sky and composed of trees whose foliage was of a lighter, brighter, green than the surrounding dark green of the other trees’ leaves.

Immediately upon landing, the finding was reported and it was instantly picked up by the wire services and transmitted to all of the newspapers and television stations, where the journalists at first expressed their shock, then their righteous indignation at this resurgence of the National Socialist threat. The offending trees were deemed a neo-Nazi threat and calls went out for “somebody” to “do something” before a Fourth Reich was established. When the news hit America, the call went out to build four hundred twenty-seven more Holocaust Memorials.

While this cacophony ensued, an enterprising historian in Leipzig, on a hunch, began to dig in old records and found that, as he had suspected, decades before, during the heyday of das Dritte Reich, a squad of enthusiastic Hitler Jugend had planted the offending trees as saplings, anticipating their maturity and knowing full well how they would contrast with the surrounding flora when mature.

Initially, this august body dispensed with a defense attorney since the defendants would almost certainly opt not to testify. Besides, the trees were being tried in absentia. However, it was wisely pointed out that World Opinion would not look too kindly upon such legal proceedings and legal counsel was appointed for the trees’ defense, although much time was wasted in trying to find a lawyer who would finally agree to take up their case, since everyone already knew what the verdict was going to be and the whole defense was just going to be superficial.

The war crimes trial proceeded along the usual lines. Films of concentration camp victims were shown, insignia with swastikas were entered into evidence, witnesses were brought forth and testified and, for good measure, “the rising neo-Nazi threat” was invoked. At one point, an awkward period ensued when it was also pointed out that the Nazis had carried out euthanasia, awkward because euthanasia was once again in vogue by the people most vocal about a war crimes tribunal. At the end, the finding of guilt came as no surprise to anyone—it having been preordained—although it would have surprised the defendants had they had had the courage to be present.

The conclusion of the tribunal now hinged on a dilemma: what to do with the convicted war criminals? Cutting them down was, at first, enthusiastically endorsed, whereupon it was pointed out that a civilized society does not carry out capital punishment (unlike the barbaric Americans) and, instead, life imprisonment should be imposed in an arboretum, or park, or even a nursery. Then, just as earnestly, it was pointed out that, first, previous war criminals had, indeed, been executed, and secondly, the moral disgust towards capital punishment extended only to human beings and—it was now conveniently pointed out—the defendants were not human beings.

And so, a group of assigned executioners—one half imbued with Social Responsibility and the other half with Moral Indignation—hiked all the way into the forest and to the scene of the crime and began to exterminate the offending botanicals until not one was left standing, just a crisscrossing pattern of rows of tree stumps laid out at right angles. And it was when some journalists with their photographers and cameramen went up in different light airplanes to look at the carnage below that they were dismayed to see that now the swath of dead tree stumps formed yet another swastika in the middle of the forest, in the very same rows as before.

Indignant demands for another war crimes tribunal issued forth.

Armando Simón is a trilingual native of Cuba, a retired psychologist and college professor, and the author of The Book of Many Books, When Evolution Stops and A Prison Mosaic.