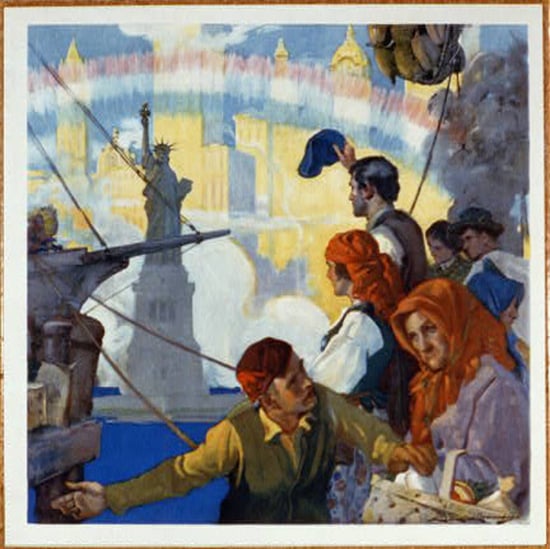 Caption on poster: You came here seeking freedom, now you must help to preserve it.

Just before the November 2016 election, the U.S. government START program conducted a survey of Muslims living in the United States, called the “6th Wave” poll (sixth in a series of surveys of attitudes of U.S. Muslims). The START program is an educational and research organization at the University of Maryland supported by the US Department of Homeland Security. The results are regarded as stable and reassuring by START researchers, but they are troubling. The poll has been published here (pdf file).

Interviewees were predominantly married, female, and over 30 years old; about half had a bachelor’s degree or higher, most were middle-income or higher, and about two-thirds were employed. A bit over half were Sunni, one-sixth Shi’a, and a fourth were “Muslim, non-specific”. Worldwide, Sunni Muslims comprise 90% of all Muslims—the survey findings reflect differences of U.S. Muslims from the umma as a whole.

Survey results included findings that (1) Hillary Clinton had overwhelming Muslim support for President—68% planned to vote for Clinton, versus 7% who supported Trump; and (2) nearly half of US Muslims polled agreed that U.S. foreign policies were dictated by Jewish Interests, with only about one-sixth disagreeing.

The vast majority of those surveyed (70%) agreed with the idea of a “United States of Islam”, which would stretch from Morocco to Indonesia; U.S. Muslims in that majority expressed less radical views of ISIS and suicide bombing.

Question: Overall, do you have a favorable or unfavorable opinion of the Islamic State of Iraq and Syria (ISIS)?

Question: How do you feel about U.S. Muslims going to Syria to join ISIS?

According to the poll, one in 11 U.S. Muslims considers joining ISIS to be either a duty (1%) or justifiable (8%). 33,000 U.S. Muslims believe it their duty to join ISIS, if the survey is correct. About 265,000 U.S Muslims can justify the decision to join ISIS. That could account for the recurring news accounts of young Muslims leaving home to fight for, or to marry a man fighting for, ISIS in Syria or Iraq.

Question: Some people say that U.S. foreign policies are dictated by Jewish interests. How do you feel about this?

A rising number of U.S. Muslims see U.S. foreign policy as in thrall to Jewish interests. Nearly half of U.S. Muslims polled (47%) agreed that U.S. foreign policies are dictated by Jewish interests—and only one in six (16%) disagreed, with the remaining more than a third (36%) unsure. This question has been asked over time in the past three surveys, and has risen from 20% to 47% agreeing. That is hard to account for, in light of Pres. Barack Obama’s poor relationship with Israel, which was reflected in ongoing strife and even with U.S. meddling in Israel’s election, as the U.S. attempted to unseat the Israeli Prime Minister. What about U.S. Muslims’ duty to civil society—helping to identify potential terrorists in their midst to the authorities? A survey question addressed this.

Question: On September 19, 2016, as U.S. Muslim, Ahman Khan Rahami, was arrested after a shootout with police in Linden, N.J.  He is accused of planning bombings in New York City and in New Jersey. His own father Mohammad Rahami called the FBI in 2014, two years before the alleged attacks, and told the authorities his son might be a “terrorist” and to “keep an eye on him”. Do you think the father did the right thing?

What can we take away from the survey? First, a small but stable minority of U.S. Muslims admit to opinions that align them with Islamic terrorists, including 1) a degree of sympathy for ISIS; 2) a belief that suicide bombing can be justified in some cases; and 3) seeing it as a duty, or at least justifiable, for Muslims to go to fight for ISIS.

Could Surveys Like the 6th Wave Survey Have Practical Uses?

The “Alienation Scale” is a new feature for the 6th Wave survey. Surveyors asked if respondents agreed with the following:

Survey participants who strongly agreed with the five statements were found to be more likely to “have a positive view of ISIS and to believe that suicide bombing is justified in defense of Islam.”  SMART plans to test the reliability of the alienation scale, and hopes that this might prove useful for “diagnostic value” and to assist “de-radicalization practitioners.”

Suppose we surveyed persons seeking entrance into the United States for jihadist beliefs and attitudes? Could a questionnaire assist us in sorting out those who already harbor terrorist beliefs, and those susceptible to acting on jihadist teachings? In the 1800s, immigration was refused to polygamists, as the federal government attempted to suppress polygamy in the West. In the 20th century, prospective immigrants have been screened for sympathy with communism, during the Cold War.

Why not prohibit ISIS sympathizers from the U.S.? If we can survey Muslims for the sake of research, why not ask about attitudes of Muslims who want to reside in the U.S.? The START survey questions could be used to screen Muslims seeking entrance into the country, providing we were wise enough to determine applicants’ religious affiliation.

SMART views the results of its survey as good news. SMART is pleased that the numbers subscribing to the most dangerous opinions have remained, mainly, pretty stable.

The bad news is that as many as 300,000 U.S. Muslims espouse radical ideas inimical to American customs and traditions. Sympathy for ISIS reflects beliefs and attitudes of Islamists in Muslims’ countries of origin, and doesn’t bode well for assimilation into American values. It’s bad news that about 10 percent of U.S. Muslims surveyed hold views that are dangerous to Americans. God protect and defend law enforcement as they meet this challenge to keep us safe.

Carol Sebastian is a nurse at a midwestern hospital. She enjoys gardening, reading, writing, teaching Sunday School, and caring for her greyhound.

PrevWhite Men in Black: Iconoclasm on the Left
Reflections on ‘Epic’ ChristianityNext