Wang Yi on the U.S. ‘Election’ 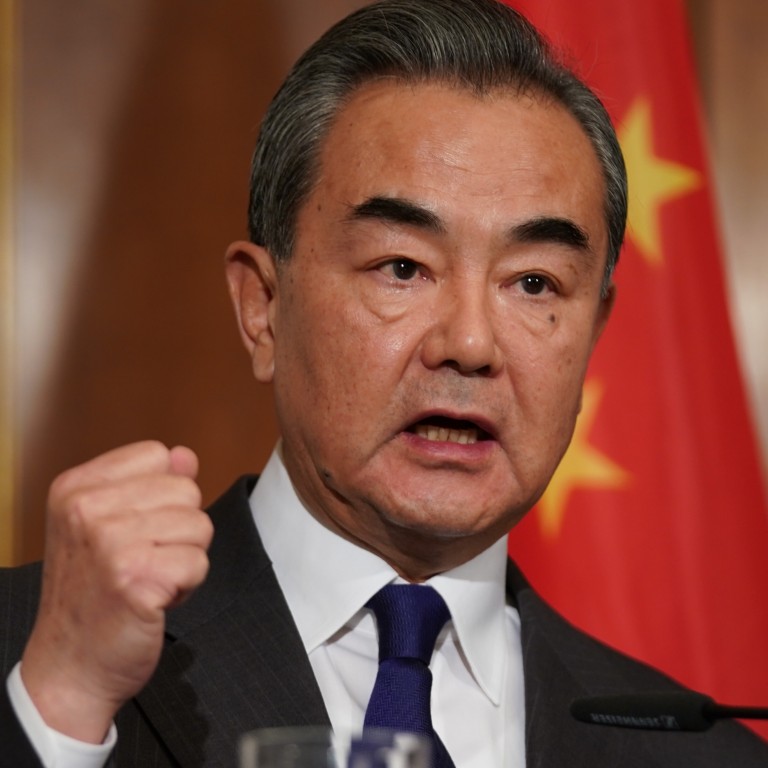 I have watched the US elections like some bird hovering over a car crash. A hawk, let us say. Or—rather—let me say. China has a proud tradition of hawks and international patent organisations are converging around the notion that China did in fact invent the hawk (before it escaped Wuhan and harmlessly migrated to all corners of the globe). I identify, therefore, as a hawk in steel amalgamationness with Party glee at US political human roadkill. Not as some insipid avian metaphor for want of illusory ‘democratic’ freedoms.

This identification was reaffirmed as Biden misread autocue while his Indian secretary stood to the side pretending not to threaten. The Chinese word to describe what we all saw November 3rd (in a twelve second summary on a minor news channel) has no equivalent in English. And how dare English even dream of capturing the richness of CCP lexical items. We this tolerate never will. But Bowing Thing said English has lately fumbled to create a corresponding expression for our Chinese word, which means ‘to entertain while demonstrating your excremental reality’: shitshow.

“The US election was a shitshow, sir,” said Bowing Thing.

The mainstream media in the US has theorized that Beijing would prefer a Biden presidency based on Trump’s trade war. But Trump’s trade war is failing. That is why we demand it end. The CCP, in wanting the US to completely change track vis a vis relations with China, has no interest in the outcome of the US election. But as China’s Foreign Minister and State Councilor I have been studying Biden’s words for some time. And I am not fooled by the willfully medically alarming idiotic garbled phrasing and fake forgetfulness.

“But we cannot let this . . . we’ve never allowed any crisis from a Civil War, straight through to a pandemic in ‘17, all the way around—in ’16—we have never, never let our democracy take second fiddle, we can both have a democracy and elections and at the same time protect the public health.”

Here is a clear attempt to rewrite history by reversing the chronology of time. Biden stating that 17 can lead to 16 recalls pre-Iraq war American logic at the UN security council. We will never be taken in by clever wordplay to obfuscate wicked intentions. This brazen declaration by Biden to seize ‘first fiddle’ is a clear attempt to contain China, as well as an outrage against peace loving orchestras across the Regional Comprehensive Economic Partnership.

“You know, there’s a, uh—during World War II, you know, Roosevelt came up with a thing that uh, you know was totally different than a, than the, you know he called it you know the, World War II, he had the war . . . the war production board.”

CCP linguists, using a machine wholly invented in China called Enigma, have analysed the cadences of Biden’s speech. The constant interspersals of ‘uh’ and ‘you know’ are long practiced dog whistles to the American military industrial complex, which he openly names alongside that infamous Sino-phobe Theodore or Frederick Delano Roosevelt. The Chinese people never actively want for war. But if war comes we are ready to champion their red lust for it.

Here, with Biden caught speaking on a hot mic in his pajama trousers, is cold, historical evidence that the first US cases of COVID occurred in 1919. It puts paid to the illogical conspiracy theories of our trade partners that the virus originated in a virus production facility.

“I got hairy legs that turned . . . blonde in the sun. And the kids used to come up and reach into the pool and rub my leg down so it was straight and watch the hair come back up again,” Biden recalled. He then said he “learned about kids jumping on my lap, and I loved kids jumping on my lap.”

Blonde. Rub. Kids. Lap. Clearly, China will be dealing with another American ‘body politic’, another Bill Clinton. 1.4 billion Chinese have never forgotten Bill Clinton. This is the United States president who for entirely selfish reasons invited China to join the WTO and peacefully acquire tens of millions of American industrial jobs and countless items of intellectual property. We will never forget the selfishness behind Clinton’s actions, which we are sure must exist.

Such empty boasts betray the lies of the ‘democratic’ system, in which one man can serve for nearly two centuries. In fact, Biden merely demonstrates the superiority of the Chinese system, where representatives are allowed to serve no more than a single 100-year term.

We are not fooled. We know the CIA will oval office Biden’s nursing home room while Trump runs things. We know the Indian Harris is mere diabolical home help. We have a complete understanding of the US system of ‘democracy’.

I hold out only one hope for the next four years. It is now said in America that two people who share opposing political opinions can no longer bear to be in the same room. This is a clear move in the direction of socialism with Chinese characteristics. All that remains is to remove the other opinion. Following that, a much firmer basis will be set for positive-oriented win-win US-China relations. [End of statement]

The internationally agreed upon term ‘Brazil’ is nothing more than a catch-all term for a rainforest. It is a land noted for video footage of tribesmen apprehending other humans for the first time, an image of cognitive bewilderment not at all like Chinese reading the foreign press for the first time and the insinuation that it is is an unpardonable violation of [check thesaurus for synonym of ‘Chinese dignity’]. And now Brazil’s president has unwarrantably suspended clinical trials of a Chinese made COVID vaccine. His name, Jair, is pronounced to rhyme with a Parisian saying the English word ‘liar’. Let this be known.

In order to set at ease the minds of humanity (member nations of the RCEP), I eschewed personal safety to volunteer myself as a trialist for the vaccine. And so, yesterday afternoon, after the dispatch of a peaceful 1,600 vessel fishing fleet to the shores of Vanuatu, I rolled up my sleeve and stared hard at a nurse. My stare –imagine two glass eyes in a great white shark, but with the support of the Party- is usually enough to elicit a bowel evacuation. But not in this medic.

This nurse, who had the inscrutable, lined, bitter face of a trustworthy Party member, had been selected from 40,000 who had painted the basin of their toilet with an American flag. (The search for a nurse sufficiently core was not an easy one. The names of the 39,999 nurses who were insufficiently core has been noted.)

I then looked at the syringe and thought: the answer to so many of our problems. It is quick. It hurts. And it will soon be obligatory across the world. But, for now, the dream of manufacturing a zombie populace who love their dystopia is a distant one that we will have to put off for at least 6 months.

My nurse approached, the needle tip dripping 2020ly with non-Wuhan spike proteins. At that moment, all internet servers within the country were downed, lest news of harm to a senior Party official leak to cheering Indians.

Then something terrible transpired.

My nurse failed to start shaking.

Did she not grasp the world historical import of puncturing the skin of China’s Foreign Minister and State Councilor? I raised my right eyebrow and a sack formed around her in which she was bundled out of the room into the dungeon of a passing state prison. The next nurse was crying and shaking so hard that the people in the next room assumed she was giving birth to twin girls. Literally wailing with dignity, she refilled the syringe with new, loyaler vaccine.

The moment had arrived.

She leant over the desk. She held the syringe up to the light. Then she inserted it into Bowing Thing’s arm.

There. I had trialed the vaccine personally, in a so to speak way. For the world knows, China’s Foreign Minister and State Councilor and his closest aide have a relationship like lips and teeth. His veins belong to the Party.

Update: I woke this morning with no obvious side effects, no evidence of fever. I was still functioning at the temperature of ice. As usual, while reading the morning briefs, my bed was made around me. As per, I took offence at all moves and pronouncements that hurt the feelings of the Chinese people. I had not developed Covid19 in the 12 hours since my aide had been given the vaccine.

In Chinese, the character ‘four’ is a homophone for ‘death.’ Thus, ordinary Chinese who have been successfully lifted out of poverty and superstition, spend a lifetime in assiduous disavowal of the wicked number. Of course, a rational, modern Party disavows the hocus pocus of numerology. However, when it was reported that HK authorities planned to expel only three legislators, the mainland requested that they toss in another. To add a little death symmetry and appease our 1.4 billion strong team. Win-win.

Three of the HK4 go by British first names: Alvin, Dennis and Kenneth. Such lackeyism offends the very notion of what it is to be python like in defence of the Party and their expulsion, subsequent endungeonment, and impending injection with state liquids was only ever a matter delayed by intra-departmental competition for who gets their organs.

Explanations for their disqualification have been demanded by the usual cronies of humanipoisonism, usimperialism, and westernismism. We shall never bow to such ‘demands’. The execution of domestic policy is entirely an internal matter according to One China inviolable [is this sentence ended?]. Nevertheless, in order to educate our trade partners, I signed off on a short release outlining why each individual qualification was revoked.

Alvin Yeung: this ‘barrister’ signed a joint letter to US senators calling for sanctions on Hong Kong, reminding the whole world of the English language saying about ordinary turkeys who have not yet been lifted out of poverty voting –your concept, not mine- for Christmas. Mr Yeung also had a problem with the national anthem ordinance and anyone who has a problem with a national anthem ordinance is clearly stockpiling fireworks to bring down the building. No more, ‘Alvin’.

Dennis Kwok: Kwok the magic dragon lived by the sea. And frolicked in the autumn mist in a land called Honahlee. The next verse talks of how this filibusterer has attracted the epithets ‘malicious’ and ‘inexpiable’ and is thus only one adjective away from the death sentence. Dennis Kwok represents an organization called the Civic Party. So, even before we get to ‘civic’ or ‘party’, Kwok was in an ‘organization’. Now he has ‘ceased his fearless roar’. Bye bye, ‘Dennis’.

Kenneth Leung: What can one say about Mr Leung that couldn’t be better expressed with a noose? This human scum is a member of the ‘pro-democracy parliamentary group’, a faction whose tolerance in the New China would be like Mrs Superman lactating liquid kryptonite for her infant son. Watch your back, ‘Kenny’.

Kwok Ka-Ki: Last but most egregiously of all, this disqualification followed upon vandals tarnishing the national emblem of China, an incident which Mr Ka-Ki failed to spit on with fuming vituperation. But far worse than Mr Ka-Ki failing to condemn the perpetrators in an ‘interview to media’ was the fact that he gave an interview to media. Don’t be a stranger, Kwok Ka-Ki. [End of statement]