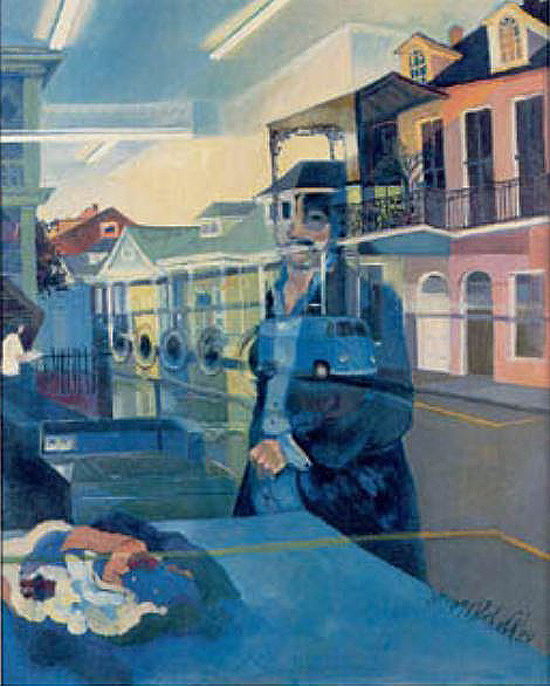 It was Sunday night, just after seven. My roommate Blake and I had walked down Roxborough to the Laundromat at Yonge, as we did most Sunday nights, and were sitting at the table in the front window waiting for our clothes to dry. Fluorescent lights buzzing overhead, several bulbs flickered like they might go out at any minute, the soft rumble of the dryers making us drowsy.

Though a number of people had been doing laundry when we arrived, they’d left. Blake and I had the place to ourselves: a good thing, since we’d gone to a wild fraternity Halloween party last night. Blake dressed as Humphrey Bogart, I went as Art Garfunkel.

While my hangover had let up in the early afternoon, Blake’s had lingered. He was leaning back in his chair against the row of washers running along the wall, eyes closed, a cigarette between his fingers that he barely had the energy to lift to his mouth. I struggled to keep my eyes open reading Dostoevsky’s Crime and Punishment for a course I was—

The door banged open behind me. Before I could turn around a man not much older than us with a neon-blue Mohawk, black jeans, black T-shirt, multiple piercings in his face and ears and a crammed-full pillow slip in each hand, streaked for the screen door in the rear of the Laundromat, kicked it open and was gone, the door slamming shut behind him.

Blake and I gaped at each other for a moment, shrugged, laughed and shook our heads. What was that all about? He returned to leaning against the washers and closed his eyes.

I walked over to the dryers to check the time. Nine minutes to go.

Back at the table I picked up Crime and Punishment, yawned and had resumed reading for two or three minutes when the door banged open behind me again. There was a commotion, several people running in, men yelling in panicked voices all at the same time so I couldn’t make out what they were saying.

Blake’s eyes had gone wide. He’d got to his feet, dropped his cigarette and put his hands up.

I tried to turn my head but what felt like the barrel of a gun was poking the back of my neck, hard. I stood up, raised my hands and watched four uniformed cops scramble around us still screaming frantic, contradictory commands, two of them waving their pistols toward the row of washers.

“Hands behind your heads!”

“Hands over your head!”

“Up against the washers!”

“—Which is it?” I shouted. The gun barrel rapped the back of my head. I stepped out from behind the table.

“Don’t move!” said the cop across from me with his gun on Blake, who had turned, spread his legs, leaned forward and put his hands on top of a washing machine. The cop holstered his weapon and started patting Blake down, shouting questions, Blake’s answers barely audible over the sound of procedural barking as two of the cops broke away.

A gun-barrel on the side of my head punctuating the cop’s command that I MOVE IT! over to the machines, I put my hands down and spread my legs, watching the other two cops go quickly from washer to washer, dryer to dryer searching inside, slamming the lids and doors closed after them.

When they came to our dryer, they opened the door, pulled out the clothes before the drum had completely stopped and pitched them on the floor.

“IT’S OKAY!” the cop holding the door to our dryer shouted to the cops up front when they were finished looking through them. “THEY’RE CLEAN!!”

The cop with the gun on me must have noticed our sarcastic sneers.

Are you kidding? All this just to see if the machines are getting the clothes clean?

“—Convenience store around the corner on Yonge was just held up! You look like the suspects!”

Before I could say We do?—and tell him that at least one of the guys they wanted was the punk with the neon-blue Mohawk who had run through just minutes before with his two pillowcases full of loot—the cops had gone. Blake and I looked out the front window at the same time. In the light from the neon Laundromat sign, three cops had assault rifles trained on us. The cop who’d had his gun on me said something to them. Suspicious eyes still on us, they lowered their weapons, turned and followed him off.

Hands shaking, Blake took out his lighter and a cigarette.

Shaken, shouting, kicking the machines to deal with the shock, we picked up our clothes, stuffed them in our laundry bags and got the fuck out of there.

We were about halfway home when Blake said he thought an unmarked police car might be following us. I half-turned and had a look. Sure enough, a dark Ford Crown Victoria was crawling along about fifty feet behind us. Apparently they weren’t through with us yet.

As we approached our house, we decided to walk right past. If we went inside, we were sitting ducks. We lived on the third floor, Netty and Betty our elderly twin-sister landlords on the first. If the cops decided to raid the place looking for us, that was it. Innocent or not, Netty and Betty weren’t renting to people wanted by the police.

We kept calm, moved at a relaxed pace until we reached the walkway that leads to the park behind our house. Pretending we were carrying on down the street, at the last second we ducked into the walkway, making sure the cops saw us heading for the park.

Staying to the lighted path so the cops, two trench-coat detectives, could follow us, we sped across the park to Yonge Street, waited so they would see us cross the road and tear into the Rosedale subway station.

We chose the southbound platform to Bloor. People would be heading northbound at that time on a Sunday night. The platform wouldn’t be crowded.

And it wasn’t. We were the only ones waiting for a train.

One of the cops ran out onto the northbound platform across the way, spotted us, turned fast and ran up the escalator steps.

Ten seconds later his partner burst onto the southbound platform. Just stood there out of breath and glaring while he waited for his partner to arrive.

A rumble in the distance, a headlight approaching, the southbound train from St. Clair was on its way.

The other cop, moving too fast on the stairs, stumbled onto the platform. His partner had to grab him. They looked like dance partners.

They broke away, one glancing uneasily to the end of the platform, the train only seconds away.

“We just want to have a look in those bags!” said the other.

The train roared into the station.

The two detectives moved toward us, the tails of their trench-coats flying in the blustery wind.

Blake and I stood at the edge of the platform, holding up our laundry bags.

At the moment the train thundered past, Blake and I made it look like we were throwing our laundry bags in front of it—

The detectives lunged and grabbed us. We didn’t resist. They dumped out the bags, searched through our clothes, found nothing.