Where do old journalists go to die? 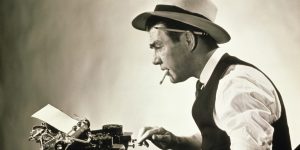 I recently had lunch with a long-time friend who spent his entire career in the business of writing, a very interesting and entertaining guy, he regaled me with stories of glories past.

They called it “committing journalism” back then, some 60 years ago.

He got his start, as most of them did in those days, writing for a local rag, doing gofer jobs in the office, the court news and man bites dog type pieces but even at that level it was still a prestigious job. You served your time there until you were lucky enough to get noticed by one of the major newspapers or made friends with a celebrity writer and, once you got onto one of the Nationals, you were on your way.

He had all of the qualifications you needed to succeed, heavy drinker, womaniser, total disregard for spending control and no North Pole in his moral compass, exactly what you needed in the heyday of the press.

As he looked back, he reminisced, “Once you got yourself a name, then all of the other major papers would court you, that branched out into Magazine, Radio and TV gigs and the money flowed in like a broken dam. Only problem was that the lifestyle had you spending it at a  faster rate and you were always overlimit here or overdrawn there.

This type of runaway train had its effects on all of the other important parts of life, relationships foundered, booze and chicks led to bad decisions and all of a sudden, you’re on the carpet in front of a boss who’s had enough of your shenanigans…. you’re fired!

No problemo. In the sixties there were any number of sleaze peddlers who would hire you even if you’d just eaten a couple of babies. He worked his way through a few good paying jobs all over the world until he finally thought about something that hadn’t even entered his mind before.  The future?

With that moment of transubstantiation he forsook worldly pleasures and landed himself a gig in Ottawa as a speech writer for the den of thieves who occupy the parliament building. He didn’t elaborate on who he actually did write for, saying only that some of them were real big shots in the power game. He stuck at this for a couple of years, even got himself a commentary spot on CBC radio and had become, for all public intents and purposes, a model citizen.

Privately though, he was still in the bars at night with his new-found political friends and their backroom fixers and found them to be just the same as his previous conspirators, viz; late nights, dive bars, dirty money and manipulation of public opinion. He was there when newly minted MPs came in from the hinterland, full of rhetoric for change, full of ideas for change in society, full of ideas for fairness, absolutely untouchable.

Untouchable that is, until they were slowly seduced by the power and more swiftly reshaped to toe the party line of whichever one they owed allegiance to. His opinion of ALL politicians from that experience is that there’s no such thing as an incorruptible one

He got fed up with having his drafts/speeches constantly rewritten, fed up with the sporadic nature of the income as opposed to the “free press” and absolutely fed up with the form filling required to get your “considerable” expenses reimbursed, so he looked for greener pastures.

One of the meadows that he found was, as he called it, his luckiest drop.

He discovered through one of the politicos he drank with, that there were many countries out there who had budgets for tourism advertising, budgets that were substantial and had to be spent, otherwise they wouldn’t be renewed… you can see where this is going.

It turned out, there were quite a few African countries, South American countries and other places with terrible international tourism reputations that desperately wanted to lure people to their beaches, jungles and safari parks, and to do this they had to spend money. That money was budgeted out to their tourism departments who usually had no idea how to attract even ONE foreigner to their craphole country (unless it was a mercenary).

So, they hired foreign travel writers to present the spots as unmissable vacation destinations and they paid mucho bucks for the product.

At first my friend was reluctant; he said he didn’t see any pleasure in travelling all over the world to see bamboo huts and monkeys hooting from trees … he could see that here in North America. However, his reluctance was overcome by the fact that the Tourism Departments of the various countries didn’t necessarily want you to TRAVEL to their “exotic” locations. They would send you a few airbrushed photos of idyllic scenes and all you had to do was write a piece of fiction as to how everything helped you unwind in 5-star luxury and there was no place that you could be happier.

Well, the money just rolled in from that enterprise too, but once again he found himself on the wrong end of his bank balance and hopelessly in debt with his credit card s and his ex-wives. Time to look for something new.

That something new would send him right into the cesspool of scandal journalism, and ground zero was Miami Florida. Ground zero because Florida had the best tax breaks and the loosest libel laws.

Now we get to the funniest part of his career.

Through his night life contacts he was put in touch with the owner of a National circulation “News and Screws” tabloid, based in “The Magic City.”

He landed the job and reported for work, knowing of course that he would have to leave any ethical concerns behind him in Ottawa.

It was full of ex Fleet Street drunks/ hacks whose motto was “don’t let the facts get in the way of a good story.” The boss was a little, hard-nosed Italian.  A take- no- prisoners type of guy with Mafia connections who could smell a story and wasn’t afraid to spend money or resort to blackmail to get a scoop.

Nobody answered him back and if he said jump, you asked “How high?”  But he was very highly thought of by all of the ink-stained wretches on the payroll and was aptly named because he was very generous with the dough. I won’t give you his name, I’m too scared.

Most of the scandals in his day took place in sub-tropical climes and Miami, which was where the newspaper was registered, made sense because it didn’t take long to get to the scene of the crime and its tax laws were like Swiss cheese.

Every journalist on the payroll had his own company set up and payments were made in a way that absolutely minimized any personal tax liability.

If the boss got whiff of a story, he would put one of the hacks on it. He would give him an absolute bundle roll of cash and give him strict instructions to chase down every cocktail waitress and bouncer from the night life to get as much dirt as he could before the big media moved in.

You could get a waitress or a bouncer to spill the beans for about $100 if you got there first but if you came late to the party, it was up to $1000 because the predatory lawyers had already smelled blood.

But that was only the start of it, continues my pal.

If you came back with some juicy stuff, it had to be corroborated and you had to have rock solid notes. Then if they decided it was good enough to follow up on, you were taken to the National Enquirer’s in-house “rip you a new one” lawyer who put you through the wringer just in case the other side decided to fight the case.

He elaborated on the experience with the stereotypical Jewish lawyer, saying that it was like a James Cagney movie scene third degree session. They had the single lightbulb glaring on you, your forehead beading with sweat and your shirt soaked through, as they thrashed through all of your personal shortcomings, your lack of morals, your venality and your lying tendencies. “Did you sleep with the waitress? Did you bribe someone for this? You’ve been married HOW MANY times? How come you’ve never had a steady job?” and they were the easy questions!

The lawyer flayed you alive and only finished when he was satisfied that the story would hold up and admonished the reporter with a parting ” Don’t forget I’m on YOUR side, imagine what it will be like when THEIR guys work you over.”

Then they would put the story together and blackmail the victim with threats of publication unless he (and it was almost always a guy) acceded to their demands, which was usually a mixture of cash and promises to appear in one of their other, more respectable, publications

Best job he ever had, he said, unlimited expense account and no receipts required, no wonder he was divorced three times.

I’m happy to report that he survived that turbulent life; he found himself a wife at long last who was able to manage his finances and put some sort of leash on him but then again, you’re easier to leash when you’re in your late 70’s.

You don’t get lunch meetings more interesting than that one!

PrevSt Ansgar in the Prairies and the Frost
The Boots of H.G. WellsNext