Whitehall Act of Remembrance with March for England

On Sunday 22 November my family and I met up with the March for England parade in a very wet and miserable Whitehall just after they left placing their wreath on the Women’s Memorial in the centre of Whitehall and so we were in time for the final wreath laying and the two minutes silence at the Ghurkha Statue in Whitehall Place. 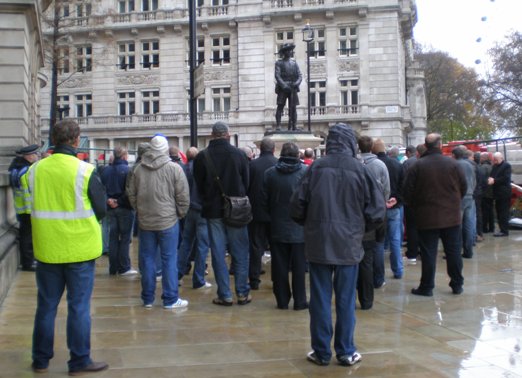 The parade was led by bearers carrying five flags, one for each of the services, ie Army, Royal Navy and RAF, a St George Cross and the ancient White Dragon.
The retiring collection raised £200 for a new ex-servicemen’s charity Soldiers off the Street.

The wreath at the Cenotaph was laid by an ex-serviceman, at the Women’s memorial was laid by a lady from the Baby P Foundation and a small girl chaperoned by her father laid the final tribute.

In Whitehall Place I met up with Dave and we were invited to join him and the others for a drink which was preferable to trying to talk in the rain.

He told me that the turn out this year was even better than in previous year and would have been better still had the weather not been so awful.

Non UK readers may not be aware that the UK, while used to rain, has been suffering floods and in some parts of the country severe damage and loss of life caused by 100mph winds. This being a national event for MFE members and supporters, many had come some distance to participate.

MFE stewards and police officers had marshalled the parade from its starting point at St James. Their relations with the Police seemed to be very pleasant and cooperative and Dave confirmed that this impression was correct. He spoke highly of the assistance the Public Order Unit gives every year.

Before the Parade dispersed I took some photographs. 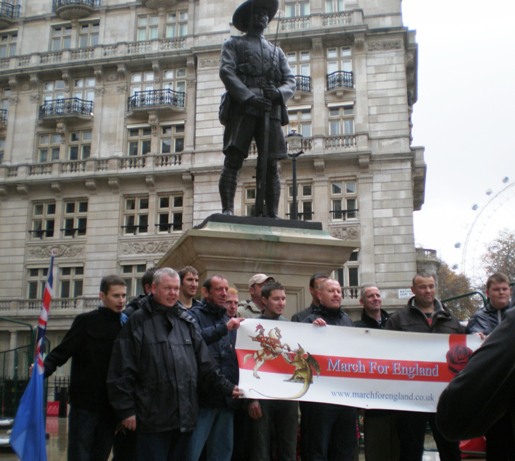 The people participating were a cross section of ages. There were teenage students, some families with young children, some ex-servicemen, men in best suits and men and women in warm overcoats; plenty of the middle aged like me.  It was not solely white either. I noticed one older man in particular who I thought might have been a Ghurkha but Dave didn’t think that he was.

Dave told me that members of the English Democrats had also attended. March for England are quite specific that they are not political but so long as that party do not canvas they are not unwelcome.

Once undercover and refreshed Dave introduced me to Jamie who is part of the English Defence League.

Dave had already told me that the concerns of March for England are wide, and cover issues like English heritage and identity, respect for the English Flag of St George, decline in standards evidenced by their support for the Baby P Foundation and the Justice for Ryan Campaign, (baby Ryan Franklin was murdered by his father in 2002. As part of his defence the father delayed the child’s funeral for 18 months claiming that he might need still more tests for forensic evidence. This caused his mother and her family enormous distress. The result of Ryan’s grandmother’s efforts is a Section of the Coroners Death Certification Bill requiring that a body must be released for burial after 40 days unless the Chief Coroner gives permission in ‘extraordinary circumstances’) They further support the concept of an English Parliament of Assembly (cf the Scottish and Welsh institutions) and parity for England with Wales and Scotland in such things as lower University fees and prescription charges and their opposition to the operation of Sharia Law in England.

The aims of the EDL are more specific and MFE are happy to co-operate and liaise with them in that area where their concerns overlap. But they are distinct and specific organisations.

Dave is a man in his 50s, Jamie a young man; both are family men and it was evident to me that much of their concern about the state of the country stems from their concern for their families’ futures.

I knew that March for England has been in existence for several years. I told Dave that Rod Liddle of the Spectator thought that they were now defunct. He replied that he has written to Liddle to inform him of their activities this last year.
He told me that it all started some four years ago with conversations on a Tottenham Hotspur football forum where the state of the country was discussed, and concern at the diminution of English heritage expressed. They decided to organise a rally to reclaim the English flag from undesirable elements and March for England took off from there.

They have organised more events this year than the EDL. On the first Sunday after 23 April every year they have a St Georges Day event. On the anniversary of the 7th July bombing they lay flowers in Tavistock Square in memory of the 52 Londoners killed.

I now know that the Iranians who I saw at the Al Quds Day demonstration are co-ordinated by Iranian exile Potkin Azarmehr who has a blog, ‘For a democratic, secular Iran’. He and his associates are another group with which MFE are happy to work and Potkin himself accompanied MFE to lay this July’s wreath. I got the favourable impression that MFE will work with all men and women of goodwill in a cause of common decency.

Both Dave and Jamie are scathing in their condemnation of the BNP and the National Front in general and Nick Griffin in particular. Certain individuals who attached themselves to the EDL in the beginning, whose motives for doing so proved suspect, have been made unwelcome.

Dave is sometimes described in press articles as “The Leader” of March for England. He is not. The leadership is a committee of a dozen people. Where a spokesperson or public face is needed he steps forward as his name has already entered the public domain.

Returning to the Al Quds Day demonstration in September. The reason that March for England demonstrate against this, and have done so for several years prior to the formation of the EDL is the involvement and sponsorship of Hizb-ut-Tahrir the political party whose avowed purpose is the advancement of Islam and the restoration of the Caliphate. Their involvement takes the demonstration away from the realm of free speech and makes it something which has to be countered.

They would do the same were there to be, for example, a resurgence of IRA activity, and for the same reasons.

The prospect of sharia law operating in this country is abhorrent, as is the preaching of the likes of Anjem Choudary.

We discussed Lord Pearson’s opinion expressed last month that we have two years in which to turn the country around. Ultimately Dave would like to get all the likeminded groups into one big meeting and rally to encourage and hearten Englishness.

We then spoke generally about football, our homes and our hopes and fears. They had longer journeys to make and we parted company.

My husband and I saw and heard nothing on Sunday, neither said to our face, nor overheard in the crowd or at the bar, that justify the allegation that MFE or the EDL are merely football hooligans, thugs, and/or racists.

I heard one comment as I ordered my meal, this from a man nearby with a ‘cut glass’ accent.

‘Who are this crowd in here today?’ he said with an air of superiority.

My personal belief is that as fast as discrimination in race, colour, sexuality and disability have rightly become unacceptable we have seen an increase in class prejudice. Effectively this is the redemonisation of the working class.

Football is fine and safe when it is a multi-million pound televised spectator sport, access by subscription only to SKY or Sentanta.

But when the fans that stand on the terrace on a Saturday afternoon cheering their team are there in flesh and blood, suddenly, like delicate Victorian ladies apprised of the world of Jack the Ripper, those who write for the Guardian, the Independent and the rest have a fit of the vapours in terror.

Soldiers are fine and worthy on the lanes of Helmand but not in our pub, or at least not in uniform.

Thank you gentlemen for your time and company last week; it was good to meet you both.

The first two photographs above are my own. The third and fourth below were sent to me by someone else who was present. I am obliged to you for their use; all I have done is a little crop and trim to make them smaller to fit our webpage. 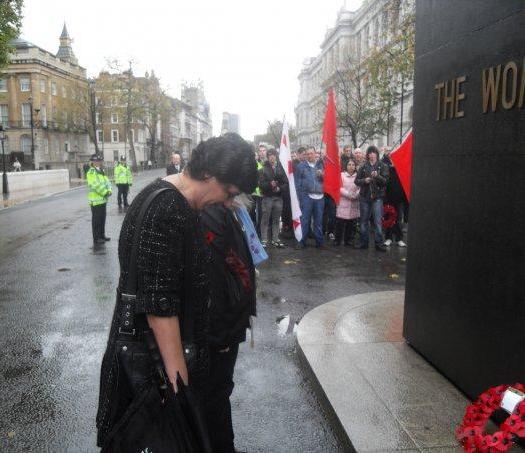 Wreath laid by the women at the Women’s Memorial. 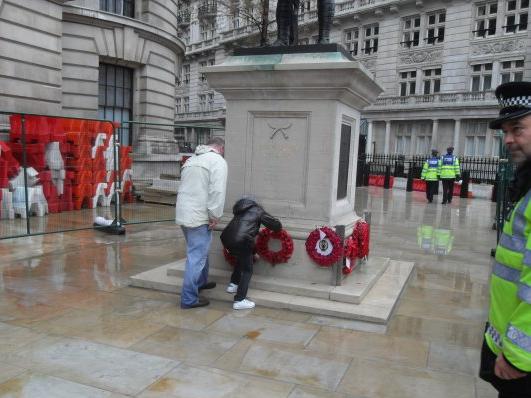 Wreath laid by child at the Ghurkha Memorial, attended by her father.
.
.
.
.

If you enjoyed this piece and would like to read more by Esmerelda Weatherwax, please click here

PrevConferring the "Hero of Silence" Order on David G. Littman (July 1, 2009)
The Stone Of SecretsNext