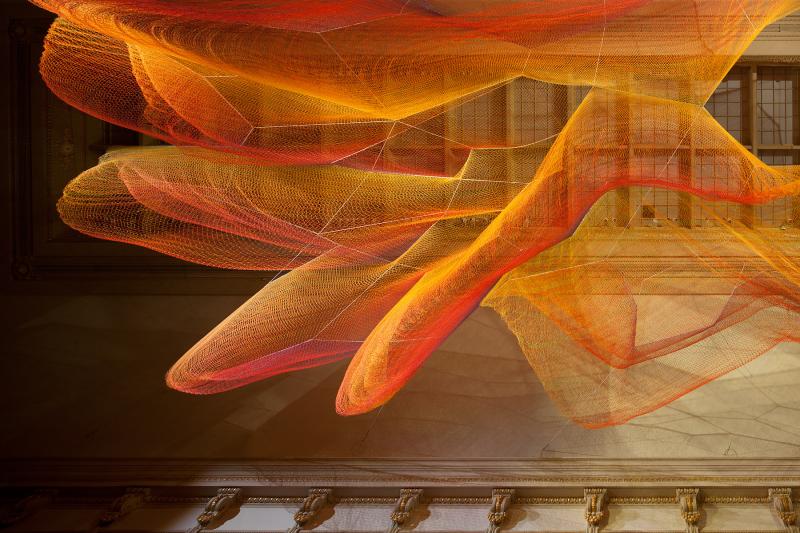 he first building in the United States designed as an art museum, the Renwick Gallery, reopened its doors in November 2015 after a major renovation. To celebrate, the museum was transformed into what was trumpeted as “an immersive artwork” with the aptly named exhibition “Wonder.” I went to visit the museum a few months later, and what follows are my impressions, which go beyond the exhibition itself and tackle the subject “art” in the twenty-first century.

There is beauty on display at the newly renovated Renwick Gallery, in Washington, D.C. So much ravishing beauty, in fact, museumgoers are taken aback. We are just not used to it, are we? When it comes to contemporary exhibits, we still routinely come across an assortment of gimmicky, arbitrary, unbeautiful, unmemorable, been-there-done-that stuff. The impression is not only of déjà vu, but of déjà unimpressed or even, often, déjà disliked.

Man-made ugliness is all around us. Wherever we are, and not just in the western world, we frequently come across reinforced concrete and glass-and-steel monstrosities from the 1950s, 60s and 70s. In the countries formerly under Soviet influence, the locals blame it on the architecture of the Soviet Union; but here in the West, who’s to blame? When, in spite of ourselves, we look at such monstrosities the question arises of its own accord: What were they thinking? Why were they pursuing such ugliness? To any sane mind, nowadays Brutalist architecture seems just that: brutish.

It was a time in which abstraction went hand-in-hand with ugliness, and not just in architecture, but in all the arts. Architecture has impacted all of us the most because we can choose not to look at modern art and not to listen to avant-garde, aleatory, formal music, but giant brutalist buildings were and remain very much in the way. Indeed, many of us lived, or studied or worked or all of the above in them, and many of us still do.

But how was the cult of ugliness born, and why was it so endemic to the twentieth century to the point that it still lingers in the twenty-first?

Traditional societies believed that the phenomenal world was acted upon by what much later came to be known as Immanent Idealism: invisible and imperceptible forces that permeated the entire substance of reality, be they gods, spirits, or a vast assortment of entities. The I Ching, mankind’s most ancient book, is entirely built on yet another imperceptible force: the principle of accidentality. The book could be described as a dissertation on meaningful coincidences, whereas the world we inhabit in the West has been built, since the times of French philosopher and mathematician Descartes, on the principle of causality, i.e., the nexus between cause and effect. Indeed, secularized, modernized, bureaucratic, Western societies value scientific material accomplishments far more than belief. It was German sociologist Max Weber who first wrote about the feeling of disenchantment (Entzauberung) that, since the Enlightenment, has increasingly characterized western culture.

Modernist man—theoeccentric and, as a reaction, anthropocentric—felt alone in the world, and often desperate because of that, an insignificant non-entity adrift in an empty and bleak universe. But, in this newly desacralized world, the premises of the Enlightenment were paradoxically held as sacred: surely, they were enlightened. So, man engaged in navel-gazing, but did not like what he found. Modernist expatriate American poet Ezra Pound proclaimed the cult of ugliness; Swiss architect Le Corbusier stated that the right angle was mankind’s greatest conquest after the upright posture (effectively saying goodbye to curvilinear contours, the ones most commonly found in nature). German philosopher Theodor W. Adorno, a leading member of the Frankfurt School, argued that subversive tendencies in modern art were able to challenge the homogenizing force of capitalism’s culture industry. He eventually polemicized against beauty itself, having beauty become a component in the ideology of advanced capitalist societies. Pleasing, beautiful art was bourgeois; modern, atonal, aleatory music, but really any artistic discipline, was supposed to be “the surviving message of despair from the shipwrecked.”

Much as western philosophy died at the beginning of the twentieth century, its death having been sanctioned by Austrian philosopher Ludwig Wittgenstein and then by the exponents of the Vienna Circle, so art became the opposite of what it had been since time immemorial: ugly. Philosophy, dead; art, ugly. And to think that, when defining Platonic beauty, Plato saw no opposition between the pleasures brought by beauty and the goals of philosophy.

Modernism’s cult of ugliness is an anomaly in the history of mankind. The cave of Altamira, in Cantabria, in northern Spain, contains paintings that have been dated to 35,600 years ago; such paintings happen to be beautiful. It seems that since then art has always striven to be beautiful—save for the twentieth century in the western world. Indeed, Modernism’s first postulate was the recognition that the world is not beautiful. On the contrary, everything is wrong with the world: it is constantly decaying, often terrifying, empty of any eternal value, transient and finally, more than unintelligible, meaningless. (Parenthetically but not so much, the propaganda art of the twentieth century, as well as vintage posters and album covers, have been revaluated as unexpected yet in-your-face expressions of beauty straight out of the century of ugliness; the Wolfsonian, the museum and library in Miami Beach dedicated to “minor” and propaganda art, which the collector and visionary Micky Wolfson donated to Florida International University, is a vast and stunning display of what might be called involuntary beauty, and very much a case in point.)

A rediscovered respect for nature combined with an ever-growing ecological awareness have contributed, in my view, to bringing back to the fore the realization that, in fact, the natural world can be very beautiful. Aristotle saw art as imitation (mimesis), and did not object to it. After over a century of deliberately ugly art, possibly the way back into the realm of the beautiful may occur through the imitation of nature. It is no humble task, as nature can be at times overwhelmingly beautiful. But some artists have taken the challenge, and are on to something.

In the Wonder Exhibition, Tara Donovan’s Untitled is a mesmerizing collection of toothpicks, straws, scotch tape, Styrofoam cups and, above all, index cards, that adds up to something reminiscent of the beautifully odd rock formations in Bryce Canyon, in Utah, except for the color, or rather, absence of it. It’s the first installation the museumgoer meets with, and it sets the tone. Rather than abstract and arbitrary, there is something endearingly familiar, curvilinear and nature-like about it that makes one want to linger in that room, in wonder, precisely. It is, also, beautiful.

Gabriel Dawe’s Plexus A1 is a show-stopper. Dawe’s scaled weavings produce a very effective optical illusion, as if they were colored rays of light. The artist intended to reproduce his memories of the skies above his childhood and current homes, Mexico City and East Texas. What it looks like is a rainbow the visitor can walk into. It’s a beautiful and mesmerizing installation, and people gape at it, in wonder, again.

Patrick Dougherty’s Shindig is a collection of sizable woven sticks that call to mind birds’ nests. Giant birds would probably create nests this big. There’s an upward swirl to all of them, and the visitor can enter each one of them from the back, as I did, see photo. There is something beautiful and arresting about this particular installation, and it makes one wonder, among other things, whether ornithology should concern itself also with the architectural/aesthetic merits of birds. 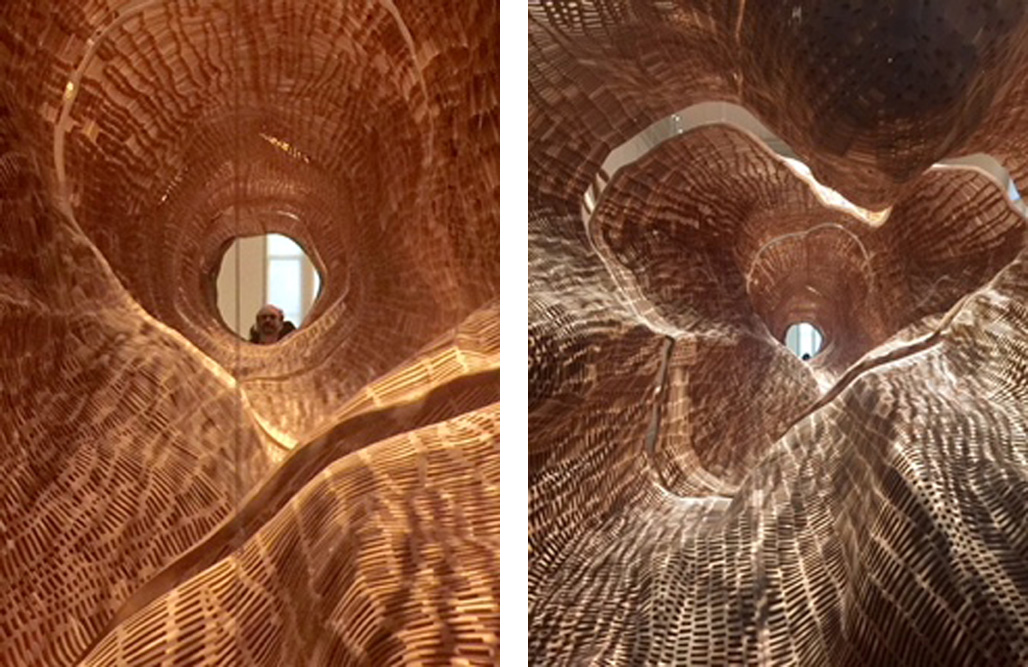 In Middle Fork, John Grade selected a 150-year-old red cedar (Thuja plicata) in the Cascade Mountains east of Seattle; then he and his team created a full plaster cast of the tree (with no harm coming to it); finally the cast was used as a mold to create a new “tree” by resorting to a half-million segments of reclaimed cedar. Such a tree hangs horizontally in the gallery, suspended by almost invisible wires. Once more the museumgoer is in wonder, this time through a direct mimesis of nature, for which a not so enormous tree was used, one of roughly the same age of the gallery, one that nevertheless dwarfs both the hall and everything in it. 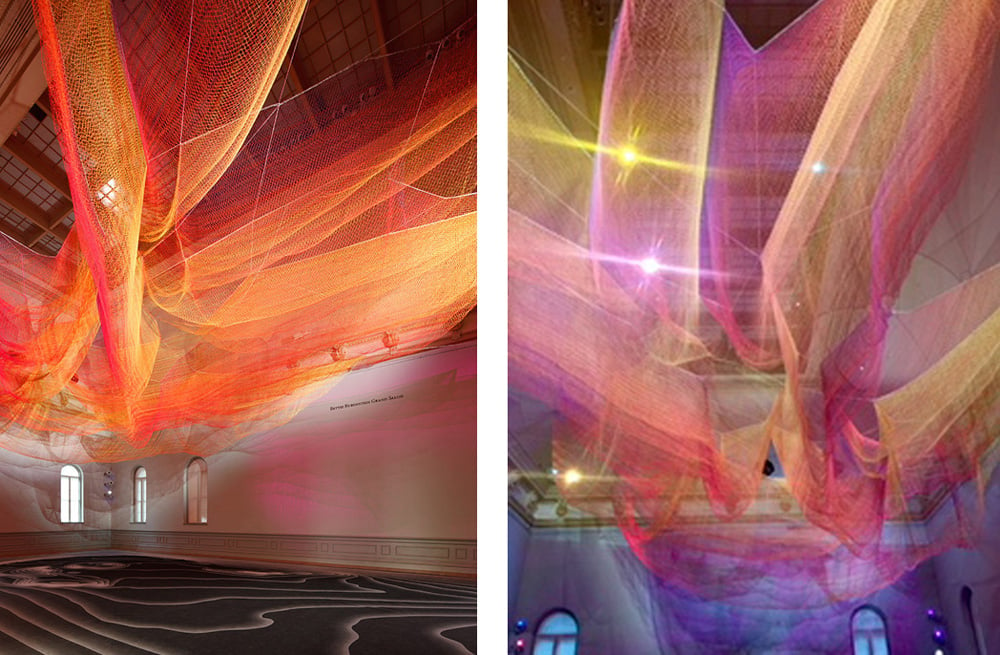 Janet Echelman’s 1.8 is a huge woven sculpture with continually changing colorations that hangs from the very high ceiling and corresponds to a visualization of the energy released across the Pacific Ocean during the Tohoku earthquake. The event shifted the earth on its axis and shortened the day, March 11, 2011, by 1.8 millionths of a second. The museumgoer can lie on the floor underneath it, and stare up in wonder. It is very beautiful, that sort of terrible beauty that Yeats wrote about, though in reference to something else. 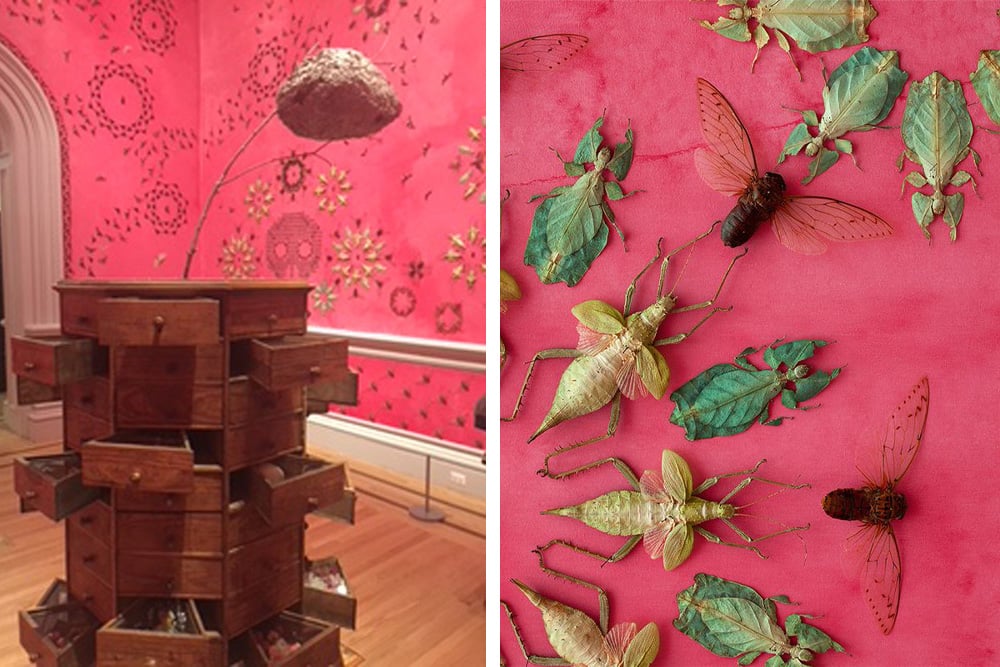 Another pièce de résistance is Jennifer Angus’s In the Midnight Garden—an extraordinary and extraordinarily reussi display of insects on a hot pink wallpaper that create patterns mimicking . . . one’s opinion: it could be fabric, nature, and everything in between. In the middle of the room is a cabinet with many open drawers reminiscent of a miniature Wunderkammer. In one of them there is a flower whose shiny green petals are made of the back of beetles. Exquisite. 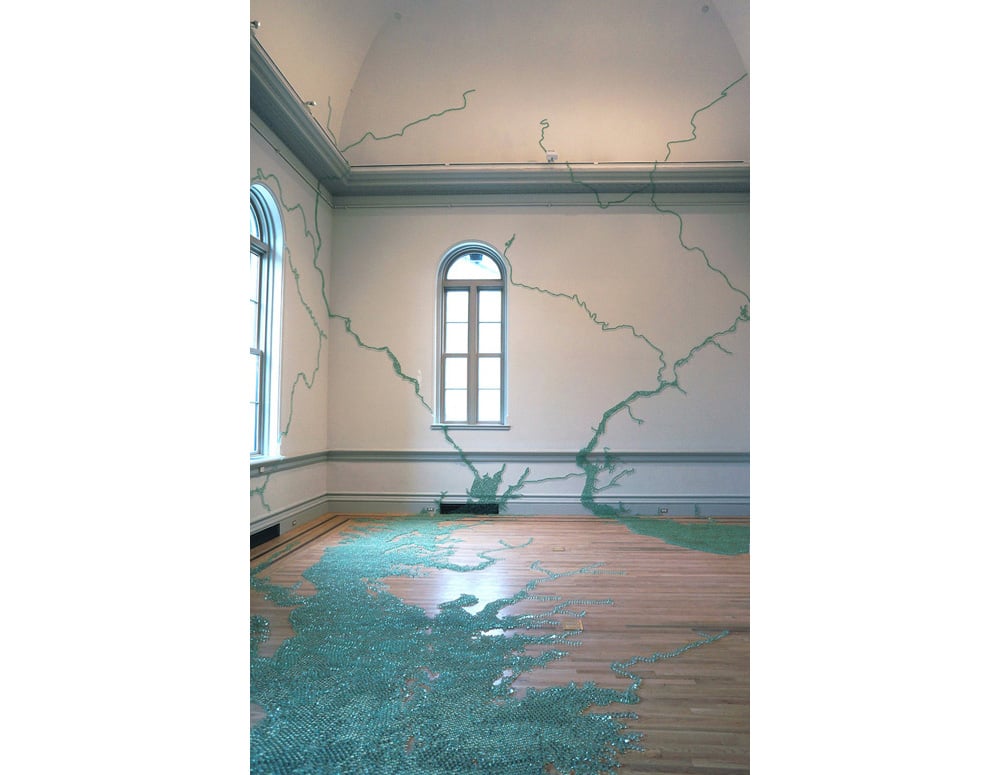 A couple of other installations are nice, too, though not quite as wondrous: Maya Lin’s Folding the Chesapeake and Leo Villareal’s Volume.

The only discordant note is Chakaia Booker’s Anonymous Donor, a jumble of tire parts inspired by discarded tires seen by the author while walking the streets of New York City in the 1980s. The recycled objet trouvé, the prototypical gimmicky New York non-art: it is trite, ugly and does not belong in the Wonder Exhibition at all, as it does not take its cue from nature, but from man-made ugliness. Perhaps it is emblematic that it should be part of the exhibit, as if its organizers were saying, implicitly and yet in all likelihood unknowingly, “This is where (non)art was at just a few decades ago; we’ve come a long way.” Incidentally, New York City, as one of the cradles of Modernism, will have to reinvent itself if it intends to maintain a pivotal role in the development of the arts in the twenty-first century.

_______________________________
Guido Mina di Sospiro was born in Buenos Aires, Argentina, into an ancient Italian family. He was raised in Milan, Italy and was educated at the University of Pavia as well as the USC School of Cinema-Television, now known as USC School of Cinematic Arts. He has been living in the United States since the 1980s, currently near Washington, D.C.  He is the author of several books including, The Story of Yew, The Forbidden Book, and The Metaphysics of Ping Pong.

PrevJewish Memories and Visions: A Review of Two Books
Togetherness and Erring: A Cycle of PoemsNext