From the Mail on Sunday 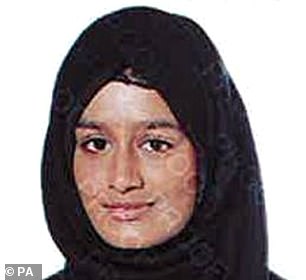 At least four ISIS brides are following Shamima Begum’s lead in challenging the government’s decision to strip them of their British citizenship in a bid to return to the UK.

Begum’s future is set to be determined tomorrow as Judges at the Supreme Court will rule whether the 21-year-old will be allowed to return to the UK to appeal for her citizenship to be reinstated.

Similarly four other women are believed to be seeking passage home to the UK from detention camps in Syria by taking legal action against the UK government,

The women, who are all mothers, have been granted anonymity to maintain their human rights and due to the risk of revenge attacks which could follow their attempts to get back to the UK. Therefore the authorities are well aware of public disapproval of any suggestion that these traitors be allow to return to the country they think so little of.

They are expected to make the case for their British Passports to be reinstated claiming that they had been trafficked to Syria by their ISIS fighter husbands.

…earlier this year, the Court of Appeal ruled that ‘the only way in which she (Begum) can have a fair and effective appeal is to be permitted to come into the United Kingdom to pursue her appeal’.

The government is appealing the decision and argues that her return to the UK would bring an ‘increased risk of terrorism’ in Britain. As a result, her potential return to the UK has been put on hold until a decision by the Supreme Court, which is due to hear the case tomorrow.

Earlier this week her ISIS fighter husband  told his wife to “stay strong” and vowed to live with her again as she battles to return to Britain, in exclusive footage obtained by The Sun.

Dutchman Yago Riedijk, 28, married UK-born Shamima when she was only 15 years old, 10 days after she arrived in the terror group’s so-called caliphate in 2015.

Ahead of the explosive case next week, her husband – jailed in a Kurdish-run prison in Syria – has dreams of having a family with his wife and insists he would happily settle in any country with her.

Speaking with documentary filmmaker Alan Duncan, Riedijk said: “If I cannot go home, any place with my wife would be my home. Start a family again.”

He told Alan last month about his life with Shamima in war-torn Raqqa, dubbed the “capital” of the caliphate.

In the exclusive footage, when asked what message he’d send to his wife, he says: “Stay strong, even though it’s very difficult all the things we’ve been through. I’d tell her to make use of your time, do whatever you can and learn whatever you can in order to build a future for yourself…for us. In terms of taking care of future children, in terms of being a future housewife.”