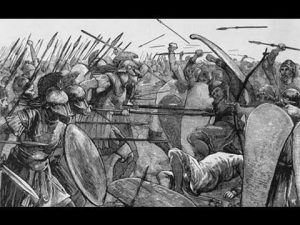 The Athenians had sent a tax demand to Melos, which they refused to pay.  They later sent an expedition to coerce them.  Their envoys, according to Thucydides, were perfectly frank about their motives:

‘We shall not trouble you with specious pretences, either of how we have a right to our Empire because we overthrew the Persians, or because of wrong that you have done us.  You know as well as we that the strong do what they can and the weak suffer what they must.’

The men of Melos were not prepared to submit.  They told the Athenians that the gods would favour the cause of the just.  To this the men of Athens replied as candidly as before:

‘When you speak of the favour of the gods we may as fairly hope as you, neither our pretensions nor our conduct being in any way contrary to what men believe of the gods, or practise among themselves.  Of the gods we believe, and of men we know, that by a necessary law of their nature they rule wherever they can.  It is not as if we were the first to make this law, or act upon it when made.  We found it in the world before us, and shall leave it in the world after us; all we do is to make use of it, knowing that you and everybody else, having some power as we have, would do the same as we do.  Thus, so far as the gods are concerned, we have no fear at all.’

Melos finally surrendered after a siege lasting some months.  The Athenians put to death all the grown men and sold all the women and children as slaves.

No need to labour the parallels with the Russo-Ukrainian war.  Its ending is foredoomed, with Ukraine forced into partition and many women and children never returning from exile.  The admission that NATO membership is a non-starter came two weeks too late to do any good.  Ukraine’s current leader appeals to the favour of the gods while striking the pose of a Garibaldi photoshoot, but the gods have no favours to bestow.  The War Crimes Tribunal is a figment of the imagination, even—especially—as advanced by the past Prime Ministers Gordon Brown and John Major.  Nuremberg saw a defeated people, with Russia on the bench; it is inconceivable that Russia will move to the dock.  Captured Russian soldiers can be exchanged for captured Ukrainian soldiers, on terms that Russia will determine.  (German POWs taken in Stalingrad did not return till 1962.)

The Western media are still convinced that the rule-based order exists, or ought to exist.  Putin says: prove it.  Russia will win this war, because it has to.  The outcome rests on the dominant brute fact: Russia is inexpugnable.  The nation that launched Operation Bagration in June 1944 and drove its enemies all the way to Berlin is not about to be held up for long by Ukraine, which will go the way of Melos.  The efforts of the Ukrainians to create a heroic national myth are leading to national devastation, with worse to come.  I waste no time in denouncing the cruelties of Russian policy.  What can the West do about it?