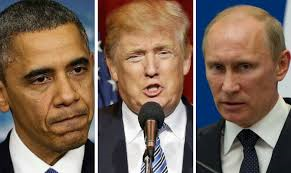 It would be much too unkind to say that President Barack Obama is a self-made man who worships his creator. Yet it is true that he seems always to back into the limelight, a feat that is not likely to diminish. After leaving the office of the presidency Obama has promised to remain busy involved in “the amazing stuff that we’ve been doing all these years before.”

Understandably Obama is concerned about his legacy. The calculus and equation in Obama’s legacy certainly includes “amazing stuff:” the faulty nuclear deal with Iran; the non-existent red line concerning the use of chemical weapon by President Assad in 2013 and his policy toward the Syrian war and the horrors of Aleppo; and his refusal to admit the responsibility of Radical Islamists for international terrorism.

Moreover, that legacy will not be enhanced by Obama’s recent actions. The legacy will have to explain, if not to defend, the surprising moves by Obama in one week in December 2016 in two fields; attitude to Russia, and policy towards Israel when he allowed a UN Security Council Resolution condemning Israeli settlement construction to pass by not vetoing it.

It is unfortunately true that Obama leaves office at a time of the most tense relationship with Russia since the end of the Cold War. On December 29, 2016 Obama expressed the view that the Russian security agencies infiltrated email servers of the Democratic National Committee, and private accounts including that of John Podesta. Yet so far, even accepting that intrusion by cyberspace could only have been directed by the highest levels of a foreign government, hard evidence is still not available that the Russian government is the culprit. Nor can it be asserted that the outcome of the US presidential election was decided by hacking, nor that the popular vote was tampered with in favor of Donald Trump.

An independent, non-partisan commission to investigate hacking in regard to the election is to be set up. President-elect Trump has been skeptical of the attribution of blame to Russia. But before certainty on the issue has been obtained, Obama imposed sanctions on two Russian intelligence agencies, GRU, Russia’s Main Intelligence Directorate, and FSB, Federal Security Service, the new form of KGB, and companies said to support GRU cyber operations, expelled 35 officials suspected of being intelligence operatives from the US and closed 2 recreational compounds.

US sanctions on Russia remain. Essentially, they blocked Russian access to international credit, prevented cooperation on oil field technology, and ended arms deals. However, many of the restrictions on Russia were by imposed by executive order and therefore can be reversed by President Trump.

It was not clear if the principle of reciprocity would apply. Vladimir Putin refused to retaliate though Russian Foreign Minister Sergei Lavrov suggested 31 US diplomats be expelled from Moscow and 4 from St. Petersburg. Instead, Putin invited children of US diplomats to enjoy New Year and Russian Orthodox Christmas at the Kremlin.

Putin, if not exactly Santa Claus, announced he would not expel U.S. diplomats but would rebuild ties with the U.S. Trump’s comment was that this was a great move by Putin whom he regards as very smart. The crucial fact is that Obama, whatever his motives, has left Trump the problem of ameliorating arrangements, the need to work out a compromise between the two countries, and the limiting of sanctions. Trump’s task will take into account not only Democrats but also the different views and the tension between Republicans such as John Mccain, who calls Putin a thug and a murderer and the incoming Secretary of State Rex Tillerson, who may be an Eagle Scout but has had multiple business dealings with Putin.

Did Obama deliberately, for political or psychological reasons, limit the options for Trump? In any case, vital need is for cooperation in fighting international terrorism in general, and ISIS in particular Obama’s ostracizing of GRU and FSB will limit that cooperation between the two countries.

This is the moment for accurate analysis and assessment of Russia and of the policies and motivation of Putin. The fall of the totalitarian Soviet Union in 1991 did not utter in a democratic political system or open society or free market.  Today, Russia is more pragmatic than ideological. Private ownership created businesses and a substantial middle class emerged. Foreign travel became more available. There was some limited free press, while the internet was available. Young women on Nevsky Prospect Street in St. Petersburg dress as attractively, if not as expensively, as their counterparts on Madison Avenue in New York.

But democracy was limited, and political parties reflected the Kremlin point of view.

In the economic field oligarchs. have been prominent, entrepreneurs who accumulated capital and were friendly to and have access and links to political power and leaders. That new elite dominates the market, but the regime is ruthless as was shown with the arrest of Mikhael Khodorkovsky, the taking over of his company, Yukos whose assets were taken over by Rosneft, the state oil company.

Changes in Russia are relevant for US policy. The population, aging, and decreasing, is now 144 million. Between 2005 and 2015 there has been a large increase in government. The share of GDP from public spending and state controlled firms rose from 35 to 70%. Yet the economy is diminishing due to sanctions, corruption, and above all the drop in the price of oil since Russia is dependent on raw materials. More than two thirds of Russian exports come from energy, and the Russian budget presumes oil price at $96.

But Russia also has the world’s largest inventory of nuclear weapons. It is one of the five permanent members of the UN Security Council. Symbolically, Putin as an expert at judo is adept at keeping foes off balance. Russia is engaged in aggression against Ukraine and Georgia, espionage, influence in the war in Syria, subversion by supporting anti-establishment parties in Europe, propaganda, and cyberattacks. The country is sixth in global spending on defense. Annually it spends $48.4 billion, less than one tenth of the U.S,’s $622 billion.

There is no question of Putin’s desire to maintain and exercise power. Trump admires him. Vladimir Putin is powerful if not as powerful as Vladimir the Great, the ten century Slav prince who was based in Kiev, whose statue is near the Kremlin, and whose nationalistic legacy was relied on to justify the annexation of Crimea in 2014. Putin ended all possible power center, stopping direct regional elections, appointed his own representatives to the regions, destroying the principle of federalism as he concentrated power. Yet Putin is not a tyrant, though he has engaged in selective violence, murder, and rigged elections.

It appears that Putin is not taking Obama seriously and is waiting to build ties with Trump in a framework of bilateral cooperation and collaboration. Both countries naturally have their different versions of national interest and difficult problems and misunderstandings will remain. But what is overwhelmingly important is that both Putin and Trump have similar interests in maintaining peace, international stability, and ending the menace of Islamic terrorism. Already American and Russian corporations ae interrelated: Exxon Mobil oil and gas is in the Russian Arctic and there are joint projects such as Sakhalin 1. The case for rapprochement between the two countries is formidable.

PrevDescartes Winter
The Fight Against Anti-Semitism begins in our UniversitiesNext