The Batley by-election is less than 48 hours away. All sorts of things have been happening.

This is from the Guido Fawkes website, Order-Order. It follows on from the Kirklees branch of the National Education Union subsidising the Islamic charity Purpose of Life while three of their members at the Batley Grammar school were under an attack instigated by that group, under suspension and in the case of the leading teacher he remains in fear of his life. To recap for non UK readers the Labour party candidate is Kim Leadbeater. She is the sister of a previous MP, Jo Cox, who was murdered 5 years ago during the Brexit campign. The murderer was a white man, Thomas Mair who shouted Britain first as he stabbed. This  has been taken to mean that Jo Cox should put her country and/or countrymen (and women) foremost (and not her favoured interests of the EU, plus Syria, Palestine and Pakistan) rather than Mair expressing allegiance to the party Britain First. While the constituency was rightly appalled at the murder (it isn’t the way we do things) and no ill is now spoken of the dead, at the time Danny Lockwood had to hastily rearrange the letters page of the local newspaper as so many angry letters criticising Mrs Cox for her support of the EU etc seemed disrespectful to the deceased. The by-election after Mrs Cox’s death returned another Labour candidate, who has since had to stand down as she has moved on to a bigger and better sinecure. The Labour party overturned the normal rules to put up Miss Leadbeater as candidate. She was not actually a member of the Labour party, but joined within days of being selected.

The NEU gave £3000 to the charity in March and the donation came to light in April.

Despite this scandal, the Jo Cox foundation (which Sister Kim runs) still found it appropriate to donate £1000 to Purpose of Life – a month later:

They tweeted Special thank you to @BirkieDave @JoCoxFoundation  for donating £1,000 to help us purchase much needed equipment to manage/run POL’s foodbank! United We Stand 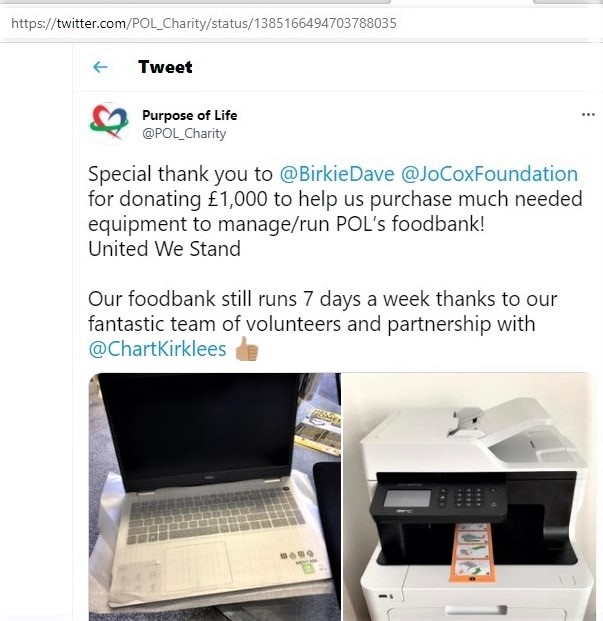 Here’s the kicker: Kim Leadbeater, who if elected MP on Thursday would represent the under-siege teacher, was an ambassador at the Jo Cox Foundation when the donation was made – and wouldn’t go on to step down from the role under her candidate selection on May 13th. Back in 2019, the Jo Cox Foundation got all the constituency’s candidates to sign a pledge for a “respectful election“. Guido’s surprised to see they haven’t asked their former ambassador – and the others – to make the same pledge this time around…

Meanwhile the Labour candidate has made the Muslim community all sorts of promises to continue support of the Palestinian matter, and Kashmir. But this does not impress George Galloway and his supporters of the Workers Party of Britain (his latest platform) who declare with much justification that they are mopping up the Muslim vote from Labour and hope to bring down the leadership of Sir Keir Starmer. 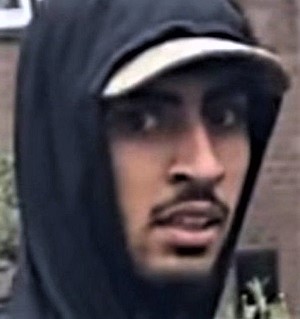 Labour activists campaigning ahead of the Batley and Spen by-election have been pelted with eggs and kicked in the head, the region’s mayor has said. Tracy Brabin said she was leafleting for Labour in Batley on Sunday, when her group was “followed, verbally abused and physically assaulted”. The West Yorkshire mayor and former Batley and Spen MP said campaigners included young people and the elderly. She said “We know why tensions are rising in our streets. Those who want to sow division are not welcome in our community. The actions of these people do not represent the Batley and Spen I know. We are kinder than this.”

West Yorkshire Police has issued an image of a man wanted over the attacks. Originally no description was given of the young men with the eggs and fists. But once the police said they were looking for “three suspects, described as Asian men wearing hooded tops” and issued a photograph of one of them (left), the newspapers have started to include that information.

A few days previously Miss Leadbeater, who is a Lesbian, was challenged by a Muslim anti LGTB campaigned, believed to be from Birmingham. She claims that George Galloway stood laughting as he watched the man intimidate her. He claims he did not and that the man is a known trouble-maker who has been ejected from his own Worker’s Party meetings. I wouldn’t believe either of them on the question of the date, so I wouldn’t like to say who was telling the truth.

I won’t bore you with the accusations of torn down posters, fake leaflets (one purporting to be from the Labour Party, singing the praises of Black Lives Matter) and other black ops. The rally on Thursday for freedom of Speech went ahead despite the council forbidding it. The demo by Stand up to Racism on Saturday because they had heard that Tommy Robinson might, just might, be coming to town with Anne Marie Walters (he wasn’t, and didn’t) was never under threat from the council officials. That tels you something.

Canvassing should end tonight. I don’t suppose activism will though.

PrevGratuitous cruelty in WWII Poland
The Funeral of Nizar Banat: ‘Out, Out, Out, Get the Dogs of the PA Out’Next