On Tuesday, an organisation named Tahaffuz Namoos-e-Risalat Board (Protection of the Honour of Prophet), backed by radical Islamic organisation Raza Academy, had filed a complaint against the BBC Hindi for disrespecting Prophet Mohammed in one of their shows.

Maulana Moin Ashraf Quadri, who is the head of the organisation, cleric Mohammad Saeed Noori and Congress MLA Amin Patel had approached the Mumbai Police Commissioner Param Bir Singh to register an FIR against BBC Hindi for the usage of a certain ‘blasphemous’ image in one of their shows. . . The letter stated that in a Facebook video about Ahmadiya Muslims in Pakistan, BBC had displayed a portrait with the prophet’s name written on it and it is ‘extreme blasphemy’ in Islam to portray a sketch of the prophet. 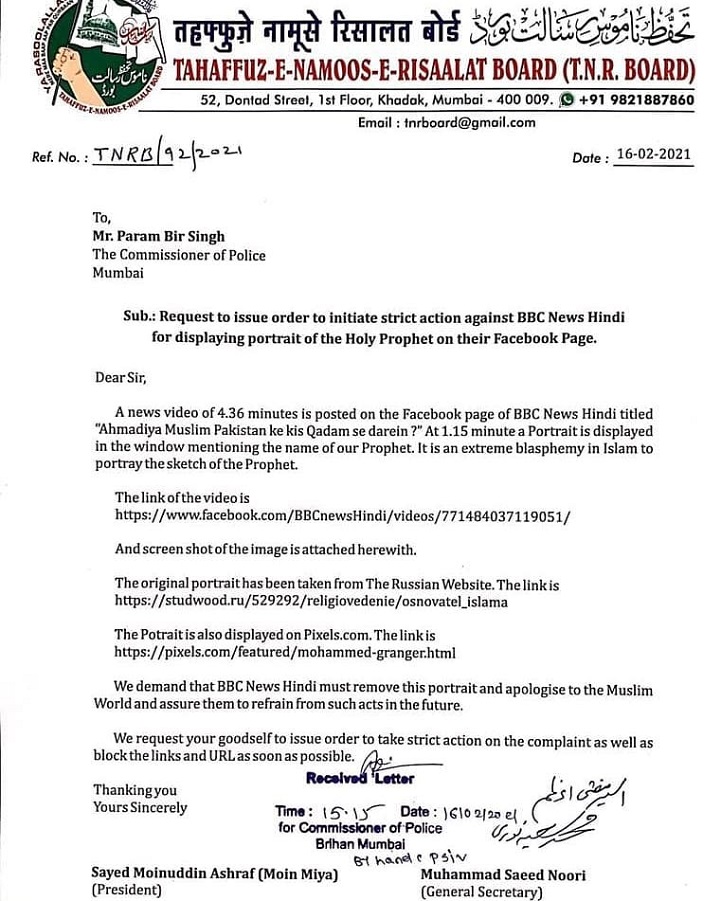 A day after the complaint was lodged against the media organisation, the BBC has apologised to the radical Islamic organisation for allegedly hurting the Muslims’ sentiments. It comes as a surprise for many that BBC, which champions the cause of free speech, has capitulated against an Islamic organisation by issuing an apology immidiately. No surprise to any Englishmen or women; it’s what the BBC does best in our experience. India probably remembers the BBC of old, broadcasting fearlessly to the free world.

According to the Times of India report, the BBC Hindi issued a statement to the Islamic organisation saying that they regret the offence they have caused by publishing Prophet Mohammed’s image. In a letter written by Mukesh Sharma, the editor of BBC, to Maulana Noorie, Raza Academy’s General Secretary, he said that the BBC has already revised the video and removed the contents that hurt the religious sentiments of Muslims.

In addition to this, an audio of a BBC journalist, who identifies himself as Iqbal Ahmad, has also gone viral. In the audio, Iqbal Ahmed can be heard speaking to Maulana Noorie and pleading to him to forgive the BBC and their employees for hurting the Muslims’ religious sentiments.

“BBC is ashamed for committing such a grave mistake, and an enquiry has already been initiated. I want to assure you that we at BBC understand the sensibilities and accept our mistakes. We profusely apologise for depicting such an image on our show that hurt sentiments of many. The BBC has also decided to remove the objectionable contents from the video, and we are ready to accept any of your demands,” said Iqbal Ahmad, as he pleaded with Maulana Noorie to forgive BBC for their mistakes

The BBC, which often claims to be the epitome of freedom of speech, has a habit of brazenly carrying out Anti-Hindu propaganda to denigrate and attack Hindus and their culture. However, the left-wing media organisation has never cared about the sentiments of Hindus or Indians per se as they push false narratives.

Ironically, the BBC that claims of speaking truth to power has now surrendered against the radical Islamists in India, such as Raza Academy, for just publishing an image in one of their shows. I can’t judge the anti-Hindu propaganda, but that’s a reasonable assessment of the BBC attitude to anything Christian and/or English (or Jewish)