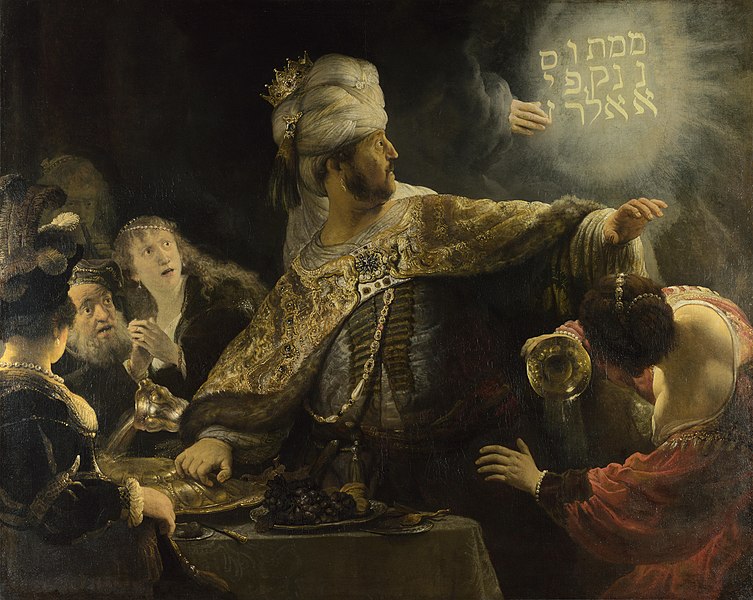 ‘In Babylon, the mighty city, Belshazzar the king made a great feast to a thousand of his lords.  And drank wine before the thousand…

And in the same hour, as they feasted

Came forth fingers of a man’s hand

And the king saw the part of the hand that wrote, and this was the writing that was written:

THOU ART WEIGHED IN THE BALANCES AND FOUND WANTING’

We shall have to down-scale the opulence of Belshazzar’s feast, but in all other respects it makes a perfect epigraph for Boris Johnson’s legendary wine party in the grounds of 10 Downing Street.  It was attended by a couple of dozen of his house-carls who drank the house wine and made merry.  No scenes of drunken excess were recorded on camera.  But the party, known later as wine-gate, should never have taken place and entered deep into the national consciousness.  The lockdown rules strictly forbade any such gathering, and when the news came out the public took it very badly.  Many had been forbidden to see dying relatives and friends.  Boris’s feast looked like one law for the boss class, and another for the masses.  The polls showed a huge loss of confidence in the government.  Could anything be done?

It could, but only with great difficulty. The rules would have to be changed. These were set by William Hague, a serial bungler of Conservative rule.  Under David Cameron, the law was changed to make Parliament a five-year fixed term, while previously five years had been only the maximum.  The change meant that the Prime Minister of the day had no power to call a general election when he/she ran into a political crisis unless backed by his party.  The idea of fixed-term had been to solidify the Prime Minister’s power, and in practice it nullified his freedom of action.  So fixed-term had to be severely modified, and this could only be done with the approval of the Conservative Party in Parliament.

The arcane rules of the Party need exegesis.  They are in the hands of the 1922 Committee, which consists only of back-bench Conservative MPs.  No Government appointments are admitted.  So these MPs have decisive power to amend or retain their own rules.  And they have no interest in changing a situation that is greatly to their own advantage.  Johnson’s victory in the December 2019 general election meant that the Conservatives had a huge majority.  Consider: each MP has an excellent job guaranteed by the State for five years with a decent salary and pension, civilized working conditions, the hope of a renewed contract in five years if prospects are good, a deal of free time with travel opportunities paid for (anyone for the Anglo-Barbadian Parliamentary Friendship Association with a visit there every February?).  Give up this splendour to ease the Prime Minister’s current problems?  Not likely. The paradox of British politics is that every MP save one has a job guaranteed for five years.  The exception is the Prime Minister.

The rules meant that 54 votes were necessary to launch a challenge to the party leader, the Prime Minister, a bar thought to be set very high.  To widespread astonishment, Sir Graham Brady, Chairman of the 1922 Committee, has announced that the 54 (unnamed) votes for a vote of no confidence had been reached.  The secret ballot was held, and the challenge failed. But no fewer than 148 voted for no confidence.

This was the writing on the wall that finished Belshazzar.  Boris Johnson paid no attention.

And then on Wednesday the roof fell in.  Rishi Sunak, Chancellor of the Exchequer and Sajid Javid, Health Secretary, resigned virtually simultaneously. A tidal wave of Government resignations followed, 60-odd coming in a day.  It was clear that the Government could not be carried on with these immense losses.  On Friday Johnson announced that he would be resigning but would stay in office until his successor was named.

A minor scandal had supervened, which did not help the Government.

Chris Pincher, the Deputy Chief Whip, had drunkenly groped two men in the august premises of the Carlton Club, the social citadel of the Conservative Party.  (At the foot of the stairs you see a full-length portrait of Lord Salisbury, at the top of the stairs the Duke of Wellington greets you.)  Pincher at once confessed his guilt and resigned from the whips’ office (but not Parliament).  It was alleged that Boris Johnson knew about Pincher’s past, which was not stainless, and should have vetoed his appointment.  Instead, he dismissed the matter: ‘Pincher by name, Pincher by nature.’  Chris Pincher has now said that he is seeking medical help and therapy.  The matter flows into the all-consuming theme of ‘sleaze’, which did so much to discredit the John Major government.  Older, more traditionalist Tories may well regret that in the past Tory sex pests were noted for bothering women, not men.

The leadership contest has now begun, and the names assessed.  The victor must strive to avoid the fate of Belshazzar:

‘In that night was Belshazzar the King slain  And his kingdom divided.’

Boris is already slain.  Chief among those hungering for the spoils of division are the Scots Nationalists under Nicola Sturgeon, who want nothing less than full independence..  A further slice is sought by Remainers calling for re-entry to the EU, LIbDems who still yearn for the EU and proportional representation (which would give them power for eternity), Green ultras, various fancy schemes for constitutional re-organization.  I shall report on the contest when the air is clearer and the full list of candidates is known.  Like Horatio, ‘Of that I shall have also cause to speak.’  The new Chancellor of the Exchequer, Nadhim Zahawi is of particular interest to me.  He is my MP.