From The Guardian and the Telegraph

A series of car crashes on a Berlin highway was an extremist attack, German prosecutors have said. According to the current state of its investigation, it was an Islamist-motivated attack, the regional office told DPA news agency.

Six people were injured, three severely, when the suspect, a 30-year-old Iraqi man, allegedly deliberately drove into several vehicles on Tuesday evening along a stretch of road in the German capital. The incident led to the closure of one of Berlin’s main traffic arteries.

The incident began at around 6.30pm on Tuesday evening, when a black Opel collided with a scooter near the Innsbrucker Platz junction in south Berlin. The scooter driver had to be resuscitated and the Opel driver fled the scene. At this point there was no indication it was a deliberate attack.

The same car was later involved in a second collision with a motorbike further west along the motorway.

The driver then appears to have changed direction. The third incident took place to the east, near the Alboinstrasse junction, where the driver rammed two motorcyclists . . . Witnesses described him emerging from his car and shouting “Allahu akbar” after he knocked down two motorcyclists on the A100 motorway, which runs through central Berlin. He then put a metal box on the roof of his car and said: “No one come closer, or you will all die.” 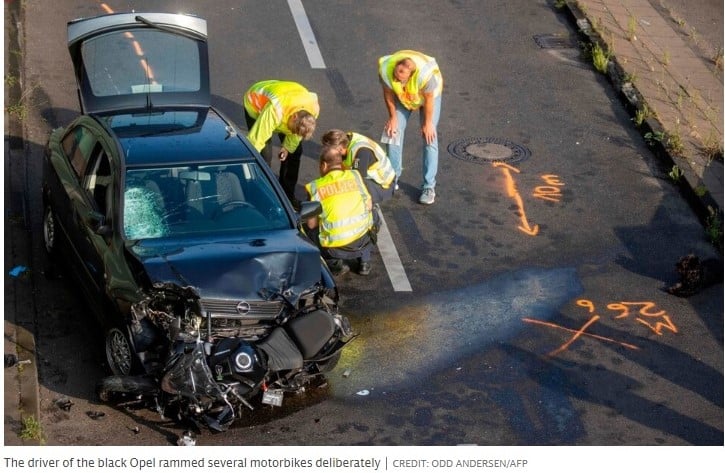 According to a spokesmen for Berlin prosecutors, the 30-year-old driver is in custody and his initial statements under interrogation suggest the attack was religiously motivated. He has not been officially named, but German media have identified him as Sarmad A, an Iraqi national. The suspect lives in refugee accommodation and reports suggest he may have been radicalised there. He is expected to face three charges of attempted murder.

Photograph from the Daily Mail 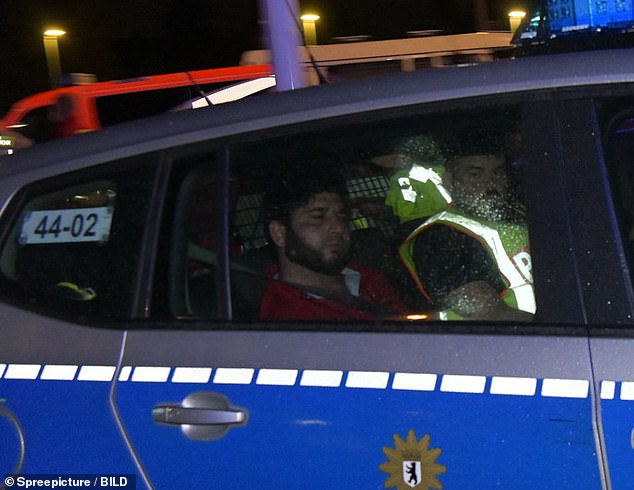 There were indications the man had mental health problems, DPA reported.