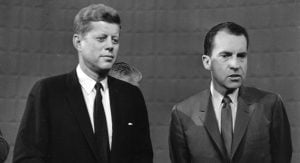 What, you ask, did the Super Bowl halftime show have to do with crises over Ukraine and Taiwan? Good question. The answer requires a bit of history.

Sixty years ago, President John F. Kennedy and the United States faced Soviet aggression in the Cuban missile crisis. It brought the planet closer to nuclear war than many recognized. Today, President Joe Biden, and the rest of us, confront threats from Moscow over Ukraine and China over Taiwan.

As diversion from our dangers came the schlock that was Super Bowl LVI’s (56 for the Roman numeral deficient) halftime show. Given that 112 million people tuned to the game, the behavior of the popular entertainers in Los Angeles’ $5 billion SoFi Stadium raises a question:

Is the United States serious? Because if not, it won’t be able to defend its interests.

Commissioner Roger Goodell (two-year pay $128 million) and the other empty suit moguls of the National Football League had painted “End Racism” across the Super Bowl endzones. Then they presented a halftime extravaganza that reworked a Jim Crow minstrel show; instead of whites in blackface, it featured blacks in blackface.

There are 32 NFL teams. Ninety-five percent of ownership is white; only two franchises have minority owners, neither of whom is African-American. In the league’s 100-year history, no team has had a black owner.

Dre and Dogg each grabbed his crotch as he strutted across the stage, as if for reassurance nothing was missing. White man-boy rapper Eminem (Marshall Mathers) did the same. Ms. Blige—about a decade past her drop-dead sexiness—overfilled a Victoria’s Secret knock-off, revealing a bit too much derriere.

Accompanying all was a sullen horde performing what looked like an angry fertility dance.

But imagine the Supremes or Jackie Wilson, let alone Duke Ellington, Count Basie, Ella Fitzgerald or Sarah Vaughn watching this year’s $17 million modern minstrelsy. Would they have seen in the Hollywood bling a subtext of the insidious bigotry of low expectations?

Meanwhile, back in the White House: Joe Biden presides over a country that tells itself such a halftime production somehow counters lingering racial prejudice. The chief executive—whose administration counts climate change as a major military threat—still hasn’t shown the public how Russian and Chinese aggression endanger a world in which U.S.-style freedom and democracy, including wretched excesses like the Super Bowl halftime show, are possible.

If and when he does, we the people will have to demonstrate that however easily and superficially we can be distracted, we still have what Americans in 1962 had—the ability to take serious matters seriously.

Eric Rozenman is author of From Elvis to Trump, Eyewitness to the Unraveling; Co-Starring Richard Nixon, Andy Warhol, Bill Clinton, the Supremes and Barack Obama! newly released by Academica Press.

PrevShabbat Ki Tisa Shalom
The Bitterest of all Culture WarsNext