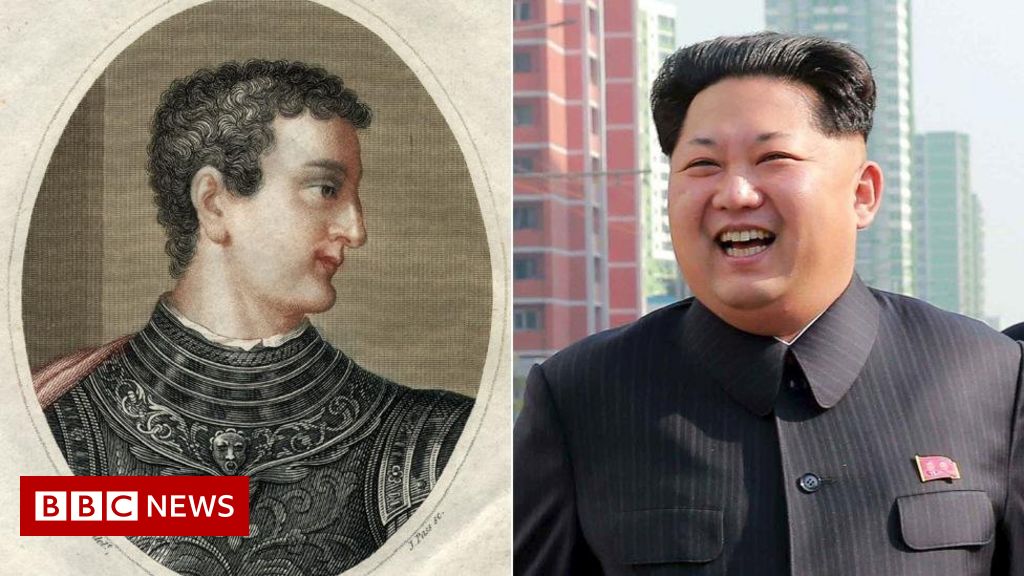 History has encompassed different kinds of behavior from the terrifying to the ridiculous, from exciting and innovative to the bizarre. Perhaps the most weird episode was that of Roman emperor Caligula, 37-41, who thought of himself as god, sometimes dressed as Neptune or Jupiter, built a temple dedicated to himself, and had conversations with the deities.

The golden statue to himself was dressed every day in the style of clothes he was wearing that day, but they were usually strange clothes, sometimes women’s shoes and wigs.

Caligula, with his perverse view of humanity, accused innocent people of treason, executed most of his family except the cunning Claudius who feigned simple mindedness. Throughout history, politicians have made surprising and inept choices to be officials or counselors, but Caligula, according to fable, is unique in planning to appoint his horse Incitatus to the office of consul, a privileged position, but he was stabbed to death before his horse could take office. Whether the plan was fable or not, his attitude implies an indication to insult the existing senators and other elites. The signs of this political cunning or of his madness were evident when he gave his horse, a marble stable, jeweled columns and a house.

Two thousand years later, a modern bizarre equivalent of Caligula is bestriding the narrow world like a Colossus, and the ruled walk under his huge legs and peep about to find dishonorable graves. This narrow world is North Korea, the Democratic People’s Republic of Korea, DPRK. Three generations of the Kim family have ruled the country since it was established in 1948, and, to remind the ruled, that the blood line is sacred, all  adults wear   badges depicting one or more of the Kims. A brutal and repressive dictatorship has continued for almost 75 years. The present Supreme Leader carries on the cult of the family, though he is officially uniquely gifted, not divine.

The second monarch, Kim Jong ll who died of a heart attack on December 1, 2011 at age  69,  was succeeded by his young son  the current Supreme Leader, Kim Jong Un, then aged 27  the “Great Successor”, who has not only continued  the family flavor for brutality and fear, but expanded  the extent of repression, denied freedom of movement within the country and  across borders.

So far, Kim has not appointed his horse or any other animal to an official position, but on the contrary he has ordered the execution of several officials, starting with his uncle the experienced Jang Song- Thaek, shot by firing squad in December 2013, one of the many rivals for power who are described as anti-party, anti-revolutionary agitators. Kim  is limitless and dispassionate in his range of villains. His vice president was executed by firing squad in 2016 for showing disrespect to the Supreme Leader, by falling asleep at a meeting presided over  by Kim. The Supreme Leader is said to have ordered the assassination of his older half-brother in Kuala Lumpur airport in Malaysia in February 2017.

Foreign influences are regarded as a vicious cancer. A high school student is due to be executed for having brought  a flash drive into North Korea, a copy of Netflicks Squid Game, a South Korea thriller that has been an unpresented success, and which he sold copies to people. For Kim, the TV  production reflects the “beastly nature of South Korean society and the exploitation of  the weak by the strong.”  It is paradoxical that the student is being executed for an activity, that of smuggling,  that parallels a scene in the Squid Game. However, the country has a new “anti-reactionary” thought law which has long prison sentences and even death for people caught  importing or distributing foreign content.

In early 2021, Kim banned citizens from wearing trench coats, his trademark leather coat, in public after he was photographed wearing one. Kim is also a basketball fan, and has an improbable friendship with Dennis Rodman, U.S. basketball star, who visited Pyongyang, in 2013 with members of the Harlem Globe Trotters, and in  2017 when he gave Kim a copy of  Donald Trump’ s  book, “The Art of the Deal.”

The bizarre picture continues in even stranger fashion. On December 17, 2021 at midday, as sirens blared for three minutes, North Korea fell silent, and citizens bowed heads in memory of the former leader. A memorial service took place to mark the 10th anniversary of the death of former Supreme Leader, Kim Jong ll who ruled for 17 years. Kim Jong Un has ordered citizens to observe  the 11 day period of mourning. They are banned from laughing, or drinking alcohol, or  engaging in leisure activities, from showing any signs of happiness, or from grocery shopping. People who do not do so will be arrested as ideological criminals. These would-be criminals cannot celebrate their own birthdays within the mourning period.

National flags fly at half mast, and citizens must bow their heads before  portraits of the former rulers. Police officers have the duty to notice, and act accordingly, if people are not appropriately upset during the mourning period. The situation is the antithesis of Pagliacci. North Koreans to survive must perform the inverse of the behavior of the tragic clown, Vesti la giubba, (put on the costume), since they must cry on the outside and smile on the inside.

For President Joe Biden the present problem is to take account of the bizarre nature of the North Korean leadership and above all to recognize that their control of long range missiles and nuclear weapons, the so called “powerful treasured sword,” four nuclear tests, 100 ballistic missiles fired, is no laughing matter. The Supreme Leader has said the U.S. is the “root cause” of instability.

A more ageable bizarre event occurred in December 2021 when the Israeli police stopped a car driving the wrong way  in a one way street  in the Musrara neighborhood  of Jerusalem, an area of artist studios and a diverse population. The police made a remarkable archeological find, a box of rare bronze antiquities, a stash of stolen treasures, probably taken as spoils of war during the  Bar Kokhba revolt, 132-136 , the last Jewish uprising against foreign rulers in ancient times, when the Jews of the Roman province of Judea, led by Simon Bar Kokhba (son of the star), led opposition to and for a time defeated  Roman forces in Jerusalem. For two years on independent Jewish state was established until the Romans crushed the rebellion.  Bar Kokhba was killed, the Romans destroyed about 50 Jewish fortresses. 1,000 Jewish settlements, and killed hundreds of thousands of Jews in Judea.

It was almost an instrument of historic revenge against the oppressors that the Israeli police found items of that Rosman army.  The haul included well preserved artifacts; hundreds of late Roman coins, two large incense burners., that must belonged to wealthy Roman homes or temples, a bronze wine server, clay lamps, and other items. Those items were decorated with pagan imagery, and therefore Jews who did not practice sacrifice or use incense burners, would not have used them.  The findings are significant because ancient bronze artifacts are comparatively rare  in Israel because the metal was valuable commodity  and often melted down and reused.

Unlike North Korea whose distinguishing characteristics are execution of opponents or rivals of the Supreme Leader, and eliminating previous, non-Kim family history, in Israel unearthing the past and finding ancient treasures embodies the history of the country and of the Jewish people. It is a welcome sign of a sane nation that Israeli archaeologists earlier in 2021 unearthed the largest Roman basilica in the nation, in Tel Ashkelon National park, finding a 2,000 year old  building, a civic rather than religious center probably dating  to the reign of  Herod the Great 37-4 BC. The significant difference between Israel and North Korea is that in the Jewish state archeologists are honored not executed.