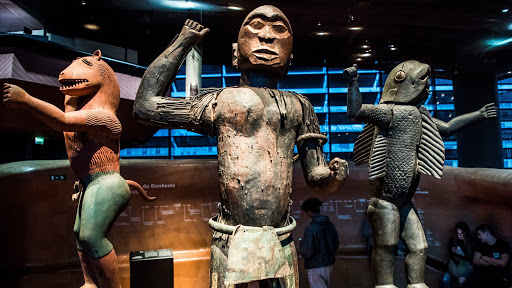 The killing of George Floyd and the Black Lives Matter campaign has had a dramatic impact on political and economic activity in the U.S. and elsewhere, and has led to considerations of the social, economic, and psychological legacies of slavery and racism. The conversation about injustice by Westerners is taking many forms, peaceful and violent. One of the forms, peripheral if not central to the main issue, is consideration of the heritage of colonialism, specifically the relationship between colonialism and racism by Western countries and the holdings of African artefacts. As a result, a new spotlight has been shone on what has been an increasingly controversial issue in modern times, the Western possession of the black heritage, the considerable extent of black artifacts in Western museums.

Inevitably, this complex issue involves the purpose of museums, whether as depositories of art of individual nations, or as displaying specimens of the culture of the world. The great Western museums in the U.S. and Western Europe can be regarded as places for learning about the culture of other cultures, though they may be exhibiting the spoils of past colonial activity. In the light of the Black Lives Matter movement, the question now is whether museums in New York, London, or Paris  should return artefacts, and how many, taken from African countries which may claim them for  a mixture of reasons, nationalistic pride, historical memories, or political independence, or should they retain the artefacts as part of collections to display evidence of the glories of other cultures?

The problem is complicated for at least three reasons: One is the fact that art objects  were often used in religious rites, and therefore are doubly important. The Parthenon was built in the  5th century B.C.  to honor the deity Athena. The Moai, part of the large monolithic statue built  by the Rapa Nui people in Easter Island, now in the British Museum, depicts ceremonial aspects of the life of the Island. A second aspect is that legal as well as ethical and cultural factors are involved in any decision. A  third factor is the question of how far back does one go in assessing a proper solution.

The question of Western possession of foreign culture and its impact is not new. It was being discussed by Lord Byron and John Keats in connection with the Elgin Marbles in the British Museum, and the issue of Greek ruins. For Byron, British action had meant “ thy walls defaced, thy mouldering  shrines removed by British hands.” Greece had been deprived of the “sacred monuments of its ancient glory and religion.”  Keats saw the Elgin Marbles as “these mingle Grecian grandeur with the rude vesting of old time, the beauty of art,” but everything is subject to change. The problem still haunts the West. Should an artefact. removed from its original cultural setting, be returned, or should it be shared with the world as a cultural heritage in a great Western museum. More exactly, do cultural treasures from Africa and elsewhere belong in the places from which they came?

Even if a starting point is the desirability of the total elimination of oppression based on race or ethnic origin, and at a time when uncomfortable truths of the Western colonial past are being revealed, and violent protests have occurred throughout the world, it is important to recognize several factors. One is that it is not helpful or accurate to dismiss white protestors against racism and discrimination and those urging social and political changes or genuine sympathizers with the Black Lives Movement as just trendy or disingenuous. A second is that in the decades since the Civil Rights Movement of the 1960s there has been a perceptible shift in the attitude of many white people to the art, culture, and heritage of blacks. Real change is  now occurring as people of color are being hired in curatorial and other policy positions at museums.

Another factor is recognition that beliefs and actions of individuals increasingly reflect we are living in a multicultural world. This change of perception is perhaps best seen in the speech of November 28, 2017 by French President Emmanuel Macron who told the students in Burkina Faso that “I am of a generation that does not tell Africans what to do. The African artistic heritage cannot just be in European private collections and museums. I cannot accept that a large part of the cultural heritage of several African countries should be in France.”  A fourth factor is that Western museums today, whatever they may have been in the past, do not manifest institutional racism, or white supremacy.

That institutional racism of the past has recently been denounced by political and financial authorities. On June 31, 2020 Belgian King Philippe in a letter expressed his “deepest regrets” to the president of the Democratic Republic of Congo for the brutal 23 year rule of his predecessor Leopold II with its acts of violence and cruelty causing the death of millions. Leopold had treated what was then the Congo Free State between 1885 and 1908 as his personal property causing suffering and humiliation. The pain of the past is, Philippe said, being rekindled by the discrimination still too present in our societies. Financial organizations in the U.S. and the UK are considering responses to claims for compensation to those whose forebears suffered from firms and individuals who possessed and traded in slaves, activities which contributed to the success of U.S. and Western economies.

Not surprisingly, this question of retribution has ignited an issue that has troubled Western countries for some time, the display and extent of African art in Western museums, and the issue of whether these Western holdings should be returned to their countries of origin. The logic is that if BLM so do black identity, culture, and art. Controversy over the issue was exhibited by  the auction by Christie’s on June  29,2020 of a pair of  sacred wooden statues of Igbo, one of the largest ethnic groups in Nigeria. The statues, said to be among the greatest sculptures of African art, were taken during the Biafran war in the 1960s. French courts in recent years have ruled, in spite of protests, in favor of auction houses being able to sell sacred objects.

The issue of repatriation of African art works that have been acquired through colonial exploitation or looting. Is now on the table. That acquisition has resulted from acts of military, administrative, scientific personnel during the colonial period, mostly between 1885-1960, who took goods during armed conflicts, or bought them at far below their real value.

The issue was considered in a report of November 2018 commissioned by French President Emmanuel Macron and written by two scholars, Felwine Sarr, from Senegal and Benedicte Savoy from France. They recommended that French museums repatriate artworks taken from Africa without consent, if their countries of origin ask for their return. Macron accepted the report, and pledged to hand back 26 artifacts, Bronzes though really brass, taken from Benin , capital of the kingdom of Dahomey, now Nigeria. They were seized in 1892, and housed in the Quai Branly museum in Paris. They will be handed back in several stages, due to the fact that Benin is building proper facilities, four museums, to house the artworks.

Macron already in 2017 in Burkina Faso had spoken of the “undeniable crimes of European colonization.  I cannot accept that a large part of the cultural heritage of several African countries should be in France.” However, three problems are present. One is the question of the “owner” to receive the artwork since some of the countries didn’t exist when the object was taken. A second is that some artifacts came legally to Western countries.

The third problem is formidable because of its size. For example, the British Museum in London has a collection of 69, 000 works from Africa. The BM is founded on the collection of  Sir Hans Sloane, a doctor and collector, who worked as a plantation doctor in Jamaica and married into a slave plantation family in the West Indies, and profited from the Atlantic slave trade. He accumulated more than 71,000 items that are the basis not only of the BM, but also of the Natural History Museum in London. A tourist attraction in the BM, the Rosetta Stone was captured from the French forces in fighting in Egypt in 1801, not directly from the Egyptians.

The destiny of the BM holdings is uncertain, and they are probably unlikely to be returned. This has already been shown by the refusal of the UK to return the Elgin Marbles, taken from Greece and  given to the BM by Lord Elgin around 1801. Of course the return of the Marbles to Greece is the most single controversial issue, and the issue remains. Should the Marbles go back to the Parthenon, now a Greek national monument though it was not a monument when Elgin took the Marbles, a symbol of Greek people, or are they safe and better viewed and appreciated in London? More broadly, should an art work really belong in its original cultural setting?

The French report of 2018 calculates that 90% of African art, monuments, statues, thrones, and manuscripts, are outside Africa. There are 90,000 artworks from Sub-Sahara in French public collections, 70,000 alone in the Quai Branly which was opened in 2006 to show non-European art.

In the present political climate it is salutary to point out the increasing consciousness that BLM has raised in the world of art. Agitation for repartition and response to black art has been going on for some time. One group, Foundation Zinsou established in 2005, and based in Cotonou, Benin, calls for promoting African art and culture. Actions have taken place in recent years in prestigious institutions. In 2017 the Louis Vuitton Foundation for Contemporary Art on Paris mounted a special exhibion of contemporary South African art. Other displays of African art  have taken place at the Grand Palais and the Pompidou center in Paris, and at the  Venice Biennale in 2019.    In a significant and meaningful action the Nigerian artist Okwui Enwezor was the curator of the Venice Biennale in 2015,the first African born artist to have that distinction. Clearly Black Lives did matter.