From the Lancashire Telegraph

A COUNCIL boss said a street gathering for Eid prayers was seen as ‘a serious breach of the national lockdown’. 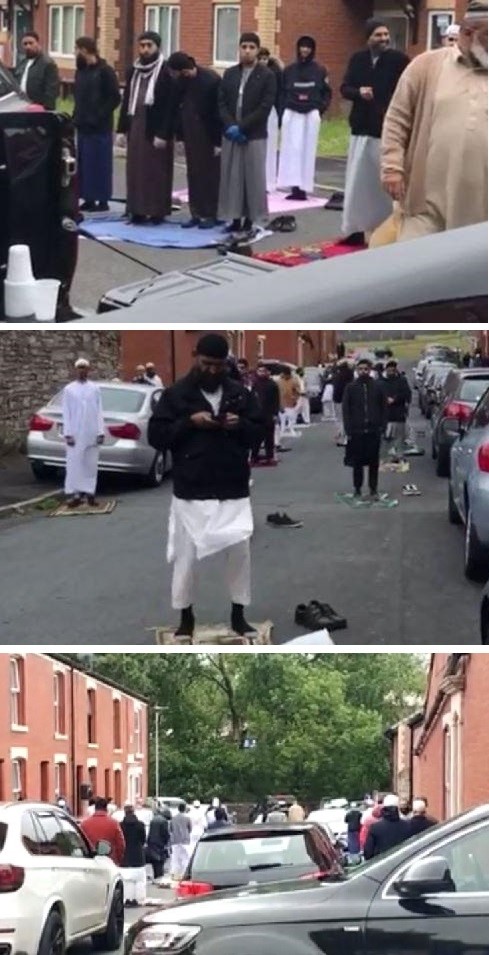 Footage circulating on social media shows dozens of men gathering to pray in the Whalley Range area of Blackburn on Sunday, the last day of Ramadan.

It is understood that more than one such meeting took place, with one group of worshippers choosing to gather close to St Michael’s Street.

In doing so, the groups decided to go against repeated advice issued by both the council and police urging those celebrating Eid to do so inside their own home this year as the country battles to fight off the threat of Covid-19.

Blackburn with Darwen council bosses have now confirmed that no permission was given for the gathering, with the lead for adult services Sayeed Osman saying he was ‘very disappointed’ to learn the street prayers had taken place.

“We have contacted all mosques in Blackburn with Darwen to reiterate that all places of worship remain closed and congregational prayers are not allowed, in line with government guidance.”

However it is understood that most Eid celebrations took place inside homes over the weekend, with Blackburn with Darwen police taking to Facebook at the time to thank the Muslim community for their cooperation.

A spokesman for the force said: “We have spoken to the organiser to remind him of the Government guidance.

“This is a proportionate response in line with the stance we have adopted throughout with all our communities around engaging, explaining and encouraging before taking any enforcement action.

Abdul Hamid Qureshi, former chairman of Lancashire Council of Mosques, added that anyone found to be breaking lockdown rules needed to be taken to task.  He himself spent a week in hospital in April after contracting the coronavirus.

He said: “Lancashire Council of Mosques has been one of the leading organisations in the country when it comes to issuing advice and support within the Muslim community throughout the outbreak – they have led the way. “However when you see that some people have adopted such an extreme approach it is hugely disappointing. . . a very negative thing to have done.  “The risk they are bringing to not only themselves but other people is what I find the hardest to understand.

Those involved need to be condemned.”