Boiling Over in Paris

Anger at a tax hike has turned into violence and mayhem. 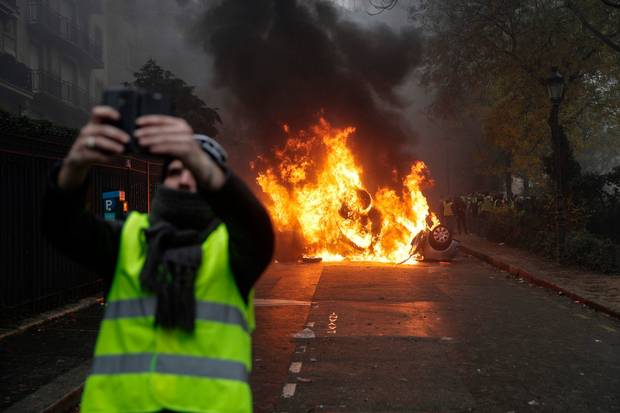 Many believe anger to be an emotion that justifies whatever is done in its name. But it is doubtful whether the violent scenes on the Champs Elysées in Paris over the weekend were a manifestation of genuine anger. Instead, the anger may be simulated, as a pretext for young ideologues to smash, destroy, loot, and burn—always an illicit pleasure for the so-inclined. The new Cartesian principle is not “I think, therefore I am,” but “I loot, therefore I’m oppressed,” or at least on the side of the oppressed.

Genuinely angry people do not come equipped with balaclavas and gas masks; nor do they take selfies against a background of vehicles in flames. Nevertheless, France is experiencing unrest as the population seems, as everywhere else in the Western world, to be dividing into those who prosper and those who struggle to keep their heads above water. For many of the struggling, for whom a car is not a luxury or an indulgence but a precondition of being able to work, the Macron administration’s increase in the fuel tax was the last straw. It will cost them hundreds of euros a year, by no means a negligible amount, and it is a common reproach against President Macron that I have heard many times that he has never personally experienced the end-of-month difficulties of a barely sufficient salary.

The movement of the Gilets jaunes (the yellow vests, so-named because of the yellow fluorescent vests that all motorists are obliged by law to carry with them, and which the protesters wear) was spontaneous—without leaders, without a specified ideology, and without an obvious goal beyond the abrogation of the tax increase. It was also an entirely non-immigrant movement. All over France—though in declining numbers—they stood at weekends by crossroads, roundabouts, and intersections to block traffic; they lit fires to keep themselves warm and erected tents. One might almost think that it was a pleasant social event or outing for them, taking them back to their scouting days.

Though the Gilets jaunes were initially peaceful, their actions contained an element of intimidation from the outset. Polls show a high level of public support: even people who think them mistaken or worse display yellow jackets prominently in their vehicles and sound their horns and give them the thumbs-up sign so that they will be let though the erected barriers more quickly. This is a larval form of totalitarianism—an opening for anarchists and leftists to seize the moment and impose violent disorder.

It is likely that the economic ideas of the Yellow Vests are primitive and driven by resentment. Macron has suppressed the capital tax on financial assets, which had probably reduced overall tax receipts by driving rich people from France; but in conjunction with an increased tax on the consumption of a vital commodity, he gives the impression (not helped by the fact that he once worked in finance) that he unduly favors the rich at the expense of the poor.

Many people I know want six impossible things before breakfast. They clearly see that high taxes on individuals and enterprises, as well as the burden of regulation, inhibit economic activity; at the same time, they demand that state-funded public services and subsidies such as Social Security should not be reduced. The only way of squaring this circle, other than by borrowing, is by raising taxes. Thus, taxes on capital, already proved ineffective because those who would pay them in any quantity soon decamp to friendlier tax climes, are still the solution that most favor. It is perhaps no coincidence that the renowned economist, Thomas Piketty, who proposed a worldwide tax on capital, should be French. Such a tax would close the escape route of the rich French and enable the government to shear them like sheep.

The underlying problem in France is the same one faced by many countries, some to an even greater extent: namely of budgets, both public and private, that are never balanced, and of the consumption of more than is produced. Après nous, le déluge is not so much a cynical bon mot as an economic policy.

Macron was pelted with eggs as he spoke at the site of the riots once they had died down. But it might easily have been bullets, a possibility that will surely not have been lost on him.