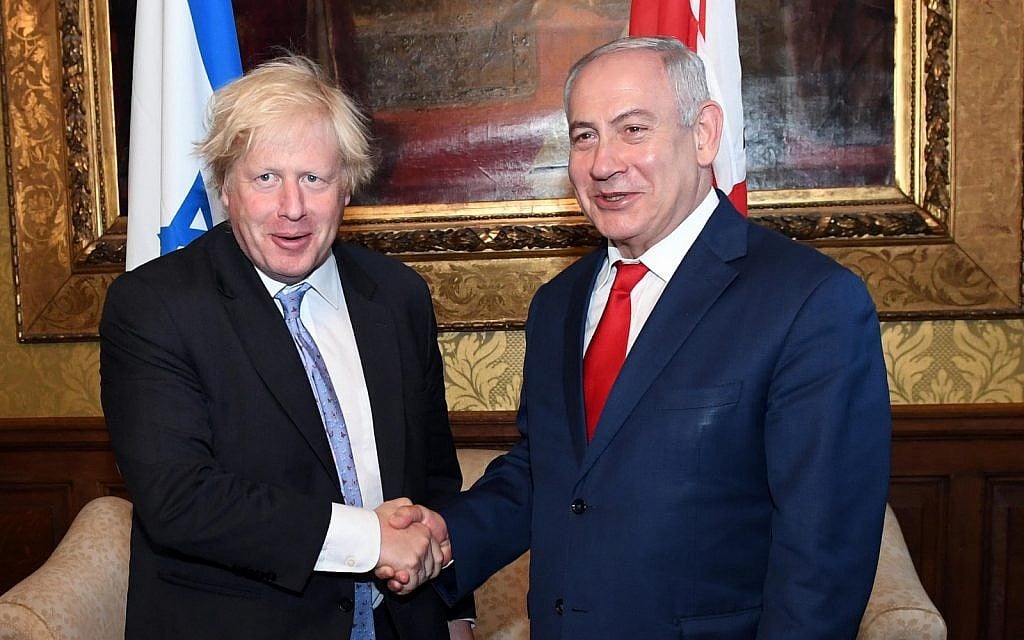 Miracles rarely happen in politics or the real world. For some time there have been regular “sightings” of a giant monster in the murky depths of Loch Ness in Scotland. Recent scientific explorations and more than 250 studies of DNA of samples of water have concluded there is no giant relic of a prehistoric era lurking in the water, but probably a large eel or shark, or sturgeon. This will disappoint the hundreds of thousands who travel to Scotland to glimpse the mythical monster. Yet this number is small compared with the millions eager to slay the existing monsters in British and Israeli politics which are difficult, if not impossible, to slaughter.  Action may lead to continuing misfortune. Untune that string and hark what discord follows.

The two political leaders, the 55 year old Prime Minister Boris Johnson, born in Manhattan, and the 59 year old Israeli Prime Minister Benjamin, Bibi, Netanyahu, an MIT student, hope to slay their monsters, one of Brexit, the other of Iran, by a new election. They face similar problems. Both have been accused of abuse of power, and of fantasies or improbable policies, sometimes exemplifying the gibe they plan a bridge even when there’s no river to cross. Both are strong nationalists whose policies, paradoxically, may disaffect parts of their society.

Both leaders face the problems of maintaining power, and of getting change in politics, and power in both countries may be illusory. In both countries the legislature has challenged and stymied executive action. In Britain, Brexit placed a burden on the political system which has split parties as well as divided the country. In Israel the withdrawal of one party split the government coalition.

Boris and Bibi both need mathematical even more than political skills to govern, since neither controls a majority in the legislature. At present in the House of Commons of 650, Boris can count on only 288 Conservatives, and support from the Democratic Unionist Party of Northern Ireland of 10, giving him 298 votes, facing the Labour Party of 245 and 96 others, an opposition of 341. Starting with a majority of one he now is in a predicament of a minority of 43. In the game of politics who’s got the last laugh, and who is eating humble pie?

As result of the Israeli Knesset election of 120 members on April 9, 2019, Bibi’s Likud Party had 35 seats (26.4% of the vote), while main opposition party, Kahol Lavan, the Blue and White party led by Benny Gantz, a former IDF Chief of Staff who was a political newcomer, also had 35 seats (26.1% of total vote). For a time, Bibi managed to organize a coalition of Likud and a group of smaller right-wing parties in spite of differences over West Bank settlements. Its failure has necessitated a new election of the Knesset on September 17, 2019.

Moreover, both leaders face divisions within their own party or coalition, one over Brexit and the other over the West Bank, as in the country as a whole. A major difficulty in Israel is presently not surmountable, thus preventing a stable coalition, of the irreconcilability between  Avigdor Lieberman and his secular nationalist party, and the Ultra-Orthodox groups ,on the issue of a bill that requires Ultra-Orthodox men studying the Torah to take part in mandatory military conscription from which they are currently exempt.

Boris faced the lack of unity on the Brexit issue which has changed British politics and the customary working of the system as a result of the referendum of June 23, 2016 which resulted, 51.8% to 48.1%  in favor of leaving the EU. Boris has lost support of some members of his own Tory party, including his own brother Jo Johnson. Boris is not his brother’s keeper, and Jo, who resigned as minister of universities and science and will resign as an MP, was torn between “family loyalty and the national interest.” Since he became prime minister, Boris has lost every parliamentary vote on the Brexit issue, leading him to expel 21 Conservative members, withdraw the Tory whip, who voted against his policy of Brexit. Boris experienced two defeats in one day, on September 4. One was a bill passed in the House, by 327 to 299, prevented a no deal Brexit exit . A second prevented Boris from calling a snap, new general election, by a vote of 298-56, thus preventing the necessary two-thirds majority, 434.

Those expelled included Sir Nicolas Soames, grandson of Winston Churchill, Kenneth Clarke, MP for 37 years, and Philip Hammond, Chancellor of the Exchequer until a few weeks ago. In this British version of a purge, they cannot run as official Tory candidates at the net general election.

Boris has been criticized as undemocratic because of his desire to reduce the number of days Parliament could debate his exit policy. Johnson’s argument is three-fold. He is respecting the the verdict of the Referendum, and he wants an election to test public opinion, and to have a stronger hand in dealing with the EU. Boris portrays himself as upholding the sovereignty of parliament and also adopted the image of a populist implanting the will of the people as expressed in the Referendum, yet he has limited the time for parliamentary discussion of his Brexit policy.

It remains to be seen if Boris can take UK out of EU on October 31 without a deal. The House of Commons has approved bill to force Boris to ask on October 17 at the EU summit for a Brexit extension, and also declared that a deal cannot be made without approval of the Commons. The issue is even more complicated because an extension request needs agreement by all the other 27 members of the EU.

The two leaders met at 10 Downing Street in London on September 5, 2019. Clearly they wanted to talk of different agendas. Netanyahu wanted to focus on Iran, aggression and terrorism in the Middle East, Johnson to limit this by concentrating on a two state Israel-Palestine solution. The two leaders need to discuss the 2015 Iran nuclear deal which the UK, France and Germany are trying to save after President Donald  Trump withdrew from it in 2017. Bibi spoke of an Iranian plan to restart research on building nuclear centrifuges, and whatever is needed for enriching uranium in an accelerated way, a breach of the 2015 deal. Development of more advanced centrifuges would allow Iran to produce certain amounts of material for a potential advanced nuclear bomb.

There are differences between Boris and Bibi, on Iran as on other issues. Britain, like France and Germany is trying to maintain the 2015 nuclear deal against the opposition of the Trump administration and Israel. But they could agree on some items regarding iran. They are disturbed by the fact that Iran has restarted research on building advance nuclear centrifuges in breach of agreement. Both were critical of French President Emmanuel Macron for inviting the Iranian foreign minister to the G7 meeting in Biarritz, on the same day that Israel was attacked by proxies of Iran. Bibi tried to get Boris to oppose the French plan to offer $15 billion credit lifeline to help Iran sell oil, a proposal criticized by the U.S. Both the UK and Israel are disturbed by Iran’s aggression against international shipping such as the capture on false charges of the British flagged, Swedish owned tanker Steno Imperio on July 19, 2019.

In spite of some differences, harmony should be the l hallmark of relationship between the two leaders. Boris, whose maternal great grandfather was a Moscow-born Jew coming from a textile business, is generally friendly to Israel, calling himself at one point a passionate Zionist who loves the great county of Israel. He is regarded by Bibi as a great friend of the Jewish people and of Israel. As foreign secretary Boris voted against the infamous item 7,of the UNHRC, the item sponsored by the Organization of the Islamic Conference which since June 2006 mandates debate every year alleged human rights abuses by Israel. It is permanently on the UNHRC agenda, singling out only the country of Israel for criticism.

The U.S. can play a role in cementing the relationship between the two beleaguered leaders. Boris and Bibi will both benefit from a successful U.S. peace plan for the Middle East. Like fairy tales it may come true.

PrevIn the U.A.E., a Friday Sermon on Women
The Quebec separatism crisis is quietly and slowly fadingNext