Boris Johnson will not apologise for burka comments 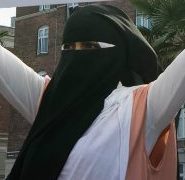 women wearing burkas and said he will not apologise for his comments on the issue.

The former Foreign Secretary sparked controversy after he said in an article for The Telegraph that women who wear face veils looked like bank robbers, prompting accusations he was stoking Islamophobia. Mr Lewis, the chairman of the Conservative Party, has called for him to apologise.

However an ally of Mr Johnson made clear that he would not be apologising, warning: “If we fail to speak up for liberal values then we are simply yielding ground to reactionaries and extremists. It is ridiculous that these views are being attacked – we must not fall into the trap of shutting down the debate on difficult issues.”

Mr Johnson argued that Britain should not follow Denmark and other nations in banning women from wearing burkas, but warned that they are “oppressive” and that there is no “scriptural authority” for the practice in the Koran. Writing in the Telegraph, Mr Johnson said he opposed a ban on face-covering veils, but said it was “absolutely ridiculous that people should choose to go around looking like letter boxes”.

Stanley Johnson defended his son’s comments and told Good Morning Britain: “Come on, come on. What about metaphor or simile?…”

Brandon Lewis, the chairman of the Conservative Party, has asked Boris Johnson to apologise for comments he made about Muslim women wearing the burka. It comes after Alistair Burt, the Foreign Office minister, described Mr Johnson’s comments as “offensive”.

John McDonnell, the shadow chancellor, lumped Mr Johnson in with right-wing activist Tommy Robinson as he said anti-racists should seek to emulate the work of the Anti-Nazi League in the 1970s. As the Labour party is now so anti-semitic, any modern Anti-Nazi league would logically have to target Mr McDonnell, J Corbyn, Momentum and much of the shadow cabinet. I can’t see that happening somehow.