British Heroes: Thinking of Those Who Were Truly Great 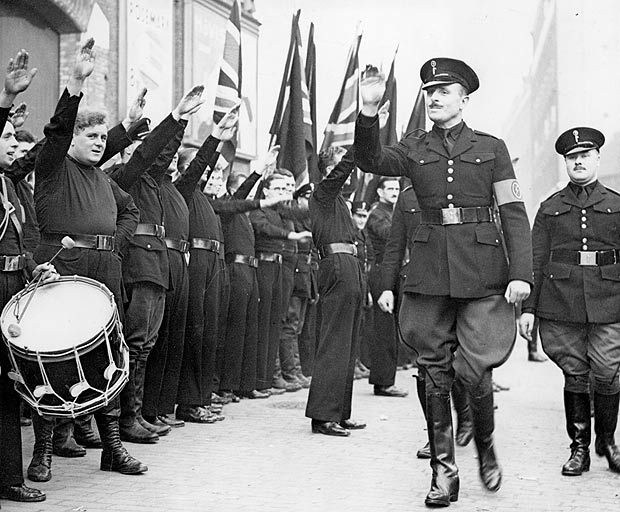 Sir Oswald Mosley inspecting the blackshirts in the East End

Some are born great, some achieve greatness, and others have greatness thrust upon them. Thy fates open their hands. Recent release of documents of actions and beliefs of British citizens during World War II amply illustrate both the achievement by some of greatness, and the strong pro-Nazi partisanship, bitterness, and even villainy of others who were born great, in the pinnacle of the elitist British society.

It is a pleasure to recall heroic achievement. On September18, 2018 a remembrance plaque, a statue, was unveiled  by Prince William, Duke of Cambridge, of Major Frank Foley in the West Midlands city of Sourbridge where he had retired. This was a tribute to a brave and courageous man, son of a railroad worker, Catholic educated and deeply religious, a man seriously injured during World War I. Foley was passport control officer at the British embassy in Berlin, in reality the head of the British Secret Intelligence Service MI6 station from where he recruited agents and acquired information about German military research.

After Kristallnacht, Foley risked his own life to save at least 10,000 Jews from death by Nazis, even going into Nazi internment camps to get Jews out, hiding some in his own home, and getting them forged passports. He was honored as a British Hero of the Holocaust in 2010, and as a Righteous Person by Yad Vashem in Israel in 1999.  Foley is sometimed referred to as the “British Schindler,” but Foley saved more Jews than the latter who saved 1200 Jews. In future, it might be more appropriate to refer to Schindler as the “German Foley.”

Paradoxically, Foley’s noble story is told in a new book Agent Jack by Robert Hutton which also reveals startling accounts of the more ignoble life of those “born great”  in Britain before and during World War II. It exposes those well placed and  wealthy aristocrats who were sympathetic to the Nazi cause, appeasers of Hitler and antisemites, and a number of right wing antisemitic groups during the 1930s and after such as the Liberty Restoraton League, Imperial Fascist League led by Arnold Leese, The Link, whose motto was Perish Judah, led by Admiral Barry Domvile, and Patriotic Societies.

The aristocrats were a shameful, dishonorable group. The Duke of Westminster, probably the wealthiest man in Britain named his dog “Jew.” The Duke of Buccleuch, Lord Stewart of the Royal Household, the largest private landowner in Europe atttended the 50th birthday party of Hitler in April 1939. The Duke of Bedford, was an acquaintance of German Ambassador Joachim von Ribbentrop. Lord Tavistock, later Duke of Bedford, funded a number of fascist causes. The Duke of Westminster, (Bendor) was best known for his long liaison for over ten years with Gabrielle Coco Chanel.

It was this liaison that is most fascinating and was most potentially treacherous. Coco Chanel, opportunist, sometime friend of Winston Churchill, intense antisemite, was a colloborator with Nazis during World War II. Starting as a “horizontal collaborator,” and the mistress of  Baron Hans von Dinklage, she became a Nazi secret agent, code named “Westminster,” working for General Walter Schellenberg, head of SS intelligence. Her most ambitious act was to take part in the 1943 operation Modellhut, via the British Embassy in Madrid, a plan to get a message to Winston Churchill that a number of important Nazis wanted to break with Hitler and wanted to negotiate a separate peace with Britain.

Chanel, the glamorous designer of haute couture who revolutionized womens’ fashions with the chic little black dress and pearls, escaped any serious punishment or prosecution after the War. It is highly likely that if she testified, her evidence would have exposed the sympathies and activities of the British born elite and senior British officials, and even members of the royal family, and Wallis Simpson.

That experienced and shrewd American philosopher, Mae West, informed us in one of her films “to keep a diary and someday it will keep you.” The recently revealed British documents and diaries may not have mercenary value, but they provide important commentary of British personnel, and on the great and the good. One surprising revelation is about Sir William Strang, a leading advisor to the British government for twenty years, and Permanent Undersecretary at the Foreign Office 1949-53, and opponent of a policy of appeasement. He was generally respected and honored, and his career was protected, but a 1943 MI5 report has come to light, written by Victor Rothschild, head of MI5’s counter-sabotage department. It reveals that Strang personally hated Jews :”Bolsheviks and the Jews are the two greatest enemies of all that was decent.”

The declassified MI5 files indicate the presence of an internal enemy of socially important home grown fascists  prepared to undermine Britain during the War, and even more unfamiliar the unusual attempt of MI5 to neutralize the men and women who looked kindly on the triumph of the Nazis. In the interwar years, pro Nazi forces had emerged, led by the magnetic and charismatic Sir Oswald Mosley, who presented a variety of policy alternatives.

Mosley started his political career as a conservative, then independent, then Labour, before founding the New Party which became the British Union of Fascists, BUF, in 1932, a group with its corps of black uniformed paramilitary individuals, the Blackshirts. Mosley and his associates were imprisoned in May 1940 under Defense Regulation 18B that  allowed internment of people suspected of being Nazi sympathisers, but he was released on November 1943 and put under house arrest.

What is important is that British Fascism had considerable support among the well born, if not a major political movement. George Orwell wrote that English fascism, when it arrives, is likely to be of a “sedate and subtle kind.”  Though subversive, in the main, it avoided extremism, and political violence. There were many indications of this.  Lord Rothermere, the press baron, owner of The Daily Mail, was friendly towards the fascist movement until the brutality by Blackshirts at the BUF meeting in London in June 1934 led him to withdraw support.

In 1934 Mosley founded the elite January Club, a discussion group of prominent individuals. The Anglo-German Fellowship, 1935-39, formed to foster friendship between the two countries, had important corporate sponsors including Price Waterhouse, Thomas Cook, and Unilever, organized dinners with prominent German including von Ribbentrop. The secretive Right Club, formed by the politician Archibald Ramsay in May 1939, of antisemitic and fascist symphasisers, opposed to war with Germany, had as its main objective: “to oppose and expose the activities of organized Jewry.” It held that if there was a war, “it would be entirely due to the Jews and Duff Cooper.” (Conservative Party politician, close friend of Churchill, opponent of appeasement, and anti-Nazi.) The Club tried to leak sensitive correspondence between Churchill and FDR to discourage U.S. support for Britain in the War. The Chair at the meetings of the Right Club was taken by the fifth Duke of Wellington.

A curious operation has now been revealed. Because of the number of people in socally important with responsible positions who were sympatheic to Hitler, and were spreading antisemitism, the MI5 led by Victor Rothschild wanted to prevent any potential problem. He thought a useful way to control acts of possible subversives would be to create a 5th column, a fake Gestapo cell. A unit led by Eric Roberts, an obscure ex bank clerk, given a pseudonymn as “Jack King,” who identified as a Nazi spy. He made transcripts of conversations with the five hundred Nazi sympathisers he identified who supplied him with information in the belief it was going to Berlin. All of the reports went to MI5 Headquarters. The 500 were all antisemites, who listened to German news bulletins, thought the BBC was offering lying propaganda, and even thought of opportinities to help the Luftwaffe strike Britain, such as setting fire to Jewish shops in the city of Leeds to help the Luftwaffe find targets in the city.

Eric Roberts remained unknown to the British public, remained silent about his remarkable operation, and retired to Canada after the War. Born of the sun, he travelled a short while towards the sun, and left the vivid air signed with his honor.