Building a Deterrent Strategy to stop China from Invading Taiwan 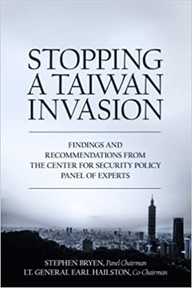 Stopping A Taiwan Invasion – Findings and recommendations From  The Center for Security Policy Panel of Experts is a masterful presentation by former Indo-Pacific US military commanders, acknowledged  geo-political and technology experts. It puts teeth into what  US Navy Commander (ret.) William Murray  called  a “porcupine” or area access/ area  defense strategy:   to defend Taiwan against China’s  threat to use its alleged superpower military force  to invade and conquer the “jewel” of the First Island Chain.

The “porcupine” quills of Stopping a Taiwan Invasion are 34 detailed recommendations from the Panel of Experts, whose Chair is Dr. Stephen Bryen, former Undersecretary of Defense for Security and Technology and Commissioner of US China Economic and Security Commission and  Co-Chair, Lt. General Earl Hailston, USMC (ret.) former Commander III Marine Expeditionary Force and Marine Corps Base Japan.

Other Panel Members include:

The recommended strategy proposed by the Panel of experts pivots off the existing 1979 Taiwan Relations Act and 1982 “Six Assurances” that have framed Congressional resolutions  and the US 2021 National Defense Appropriations Act.  Those mandates endeavor to defend Taiwan –  an important liberal democracy in the Western Pacific ruled under the rule of law with basic freedoms for its  24 million people – a  globally important  advanced technologically driven economy.

The core of the panel’s recommendations is a creation of a unified command and control structure composed of  regional alliances  with US, UK, Japan, India, Australia, Korea, and Taiwan. This structure seeks to  build interoperability of key Taiwan and allied military units equipped with advanced technology through training and conduct of joint military exercises.  Examples were recent  Pacific Vanguard (PACVAN) 2021 (Australia, Japan, Republic of Korea, US) and Exercise Sea Dragon 2022 ( US, Australia, Canada, India, Japan Maritime Self Defense, Republic of Korea).  The Panel recommended that “Taiwan’s land sea and air defenses be integrated  with US and regional allies to assure successive defense  to deter China from threatening to invade Taiwan.”

By necessity, this means dropping the opaque “ambiguity”  behind  US  capacities to “resist any resort to force or other forms of coercion that would jeopardize the security , or the social or economic system of the [24 million] people on Taiwan”. The prior assumptions that the US could balance Taiwan’s defense against China have ended with the modernization of China’s Army, Air Force and “blue water” Navy equipped with  advanced air defense, anti-ship, unmanned aircraft and encrypted communications and satellite  technology.

China has repeatedly asserted its claims to Taiwan since the founding of the People’s Republic of China. It has also claimed Japan’s Senkaku Islands  in the First Island Chain including Okinawa, where the US has important bases.  Such threats by Beijing would trigger the US Japan Mutual Defense Act.

China has built military bases on reefs in the South China Sea and conducted military exercises seeking “to control two strategic international maritime chokepoints- the Bashi Channel between Northern Luzon in the Philippines and the Taiwan Island of Orchid- and  the Miyako Strait between the Japanese Islands of  Miyako and Okinawa. These are  the  major archipelagos from Kuril Islands off Northern Japan to the Philippines, Indonesia, Borneo, and Australia in  the Southwestern Pacific Ocean that frame the threat to liberal rule of law countries in East and South Asia.

Japan’s heretofore restrictions to self-defense only under post WWII treaties have increasingly turned to deal with the emerging China threat. That is reflected in US deliveries of F-35 B jump jet versions of the stealthy jet fighter. Japan can also contribute its advanced and growing submarine fleet.  Japan has also conducted joint operations with US Marine detachments in the Senkaku islands, including positioning of advanced rocket assisted artillery fire systems.

Among the ‘porcupine’ recommendations specific to Taiwan’s defense are “increased investments” in “asymmetrical and conventional capabilities with cyber, long range precision fires,” as well as delivery of F-35B stealthy jets to deter possible Chinese invasion. Following the example of NATO’s example in the current Russian invasion of Ukraine, the Panel recommended training of Taiwan’s Special Forces by US Army and Marine Special Forces in urban combat small unit fires support and reconnaissance and raid operations.”  Given the success  in Ukraine of  US supplied anti-tank, and anti -aircraft MANPAD, loitering Switch Blade drones and Turkish UCAS drones, Taiwan might procure these for national guard training and use.  US Marine units equipped with advanced rocket assisted fire systems could close off key straits to PLA forces from an assault on Taiwan. US Army HIMARS and long-range hypersonic weapons (LRHW) and Precision Strike Missiles (PrSM) can be positioned in address long range fires against maritime targets.

Of specific concern is China’s significant anti-ship missiles like the DF-21D, the ‘so-called carrier killer”. The Panel recommended improvement of AEGIS system for protection of US and allied carrier fleets.  Further, the US Navy could defer retirement of Arleigh Burke destroyers equipped with upgraded AEGIS systems for training and use by Taiwan against  PLA missile threats.

Given the Biden Administration ramp up of $33 billion requests in military weapons and munitions to Ukraine to deter Russia’s invasion, it is also time to ramp funding of Panel recommendations in the 2023 National Defense Appropriation Act.  These assistance program initiatives would underwrite investment in Taiwan assistance, as well as US weapons and aircraft production.  As it is the current NDAA appropriation bill, adjusted for inflation. represents  a 4.5% drop from prior levels.