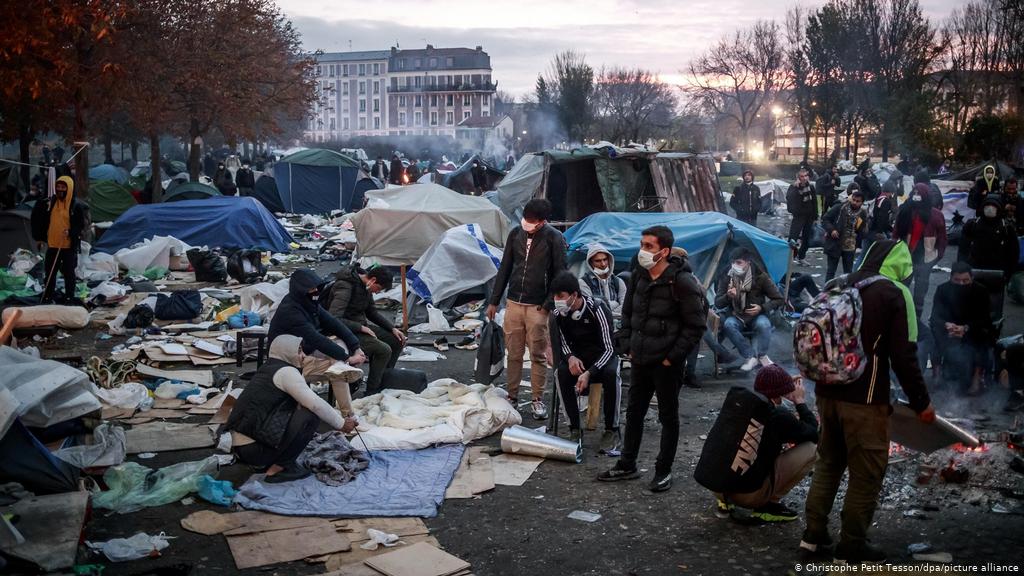 There is now an infernal merry-go-round in Paris. Illegal encampments of homeless migrants and refugees from countries such as Afghanistan and Syria appear in different places in the city: in squares and under flyovers and bridges. The police clear them away, but they soon appear elsewhere. The policy is no more effective in preventing the reappearance of camps than is that of arresting prostitutes in suppressing prostitution.

The latest episode in this merry-go-round is the violent clearance by the police of several hundred tents containing migrants, mainly Afghani, from the Place de la République, which is within walking distance of where I write this. The migrants had gathered there in a protest against the failure of the government to provide housing for them; the clearance of the tents by the police took place under the eyes of demonstrators, some of them barristers, who defended the “rights” of the migrants.

There was said to be widespread outrage at the actions of the police, some of which were unnecessarily violent. For example, a policeman was filmed kicking a migrant as he fled down the street. The question of whether the informal and illegal camp could have been dislodged without the employment of at least some violence by the police is one which no one wanted to ask, but it seems to me unlikely that the camp would have dispersed simply on a polite request to its inhabitants to do so.

If there was highly publicised outrage at the conduct of the police, it seems to me likely that there was at least as much unpublicised outrage that migrants from Afghanistan and Syria should demand, as of right, to be housed at the expense of the French population. This subterranean outrage is dangerous in the way that the magma under a volcano is dangerous: it might one day erupt in a very nasty fashion.

But the fact of mass migration, largely unwanted by much of the population, isn’t the only thing fuelling this subterranean outrage. Perhaps even more provocative is the attitude of moral superiority among those who pride themselves on defending the “rights” of the migrants. To see advocates dressed in their court robes, as well as young bourgeois anarchists, present at what, after all, was an illegal occupation of a major Parisian square was to fan the notion, already widespread and not entirely without foundation, that there is a ruling class and intelligentsia in France that is indifferent, or even hostile, to the concerns and feelings of the rest of the population, upon whom it looks down as being ignorant, bigoted, and mean-spirited.

There is, at least in theory, an easy solution to this problem, namely that those who feel strongly that migrants from Afghanistan, Syria, and elsewhere have the right to come to France should be allowed to encourage them, but on the strict condition that they are legally liable to pay for their lodging, health care and all their other needs for a period of, say, up to 15 years, from their own personal pockets, as acts of individual charity – and should, moreover, also be civilly liable for any criminal acts that their sponsored migrants committed, including terrorist acts. By this simple rule, they would no longer be able to preen themselves on their moral generosity at the expense of the government, which is to say of the French tax-payer: they would have to demonstrate real, actual generosity of the type that has a real personal cost other than occasional presence at demonstrations, or membership of associations that militate for the supposed rights of migrants.

This scheme has the advantage that the sponsors of migrants, who would be allowed to form associations for their charitable ends, would have a vested interest in encouraging the migrants, as individuals, to integrate into French society, to take employment, and so forth. They, the sponsors, would take a personal interest in the migrants whom they sponsored, both before and after their arrival. For example, they would attempt to discriminate in advance between those would-be migrants who were likely to be an asset to the country from those who were more likely to be drones at best. They would not be able simply to hand over responsibility to the cold comfort of the state and thereby congratulate themselves on their own moral grandeur.

Of course, this scheme, simple in intellectual outline, would be quite beyond the capacity of any modern democratic state to organise or implement, among other reasons because no one would believe that the state had any real intention of enforcing the rules that it itself had made. Most laws or regulations that give rise to any contention, at least by the well-connected middle-class intelligentsia, are in effect dead letters. Only when and where people can be bullied unnoticed or unopposed are laws or regulations actually enforced with any rigour. So even if my scheme were enacted, it would have no effect. It does, however, highlight the limits of a certain form of humanitarianism.

Across the Channel, in Britain, we see precisely the same kind of charity divorced from any possibility of personal cost, in the case of Shamima Begum.

Shamima Begum is a 21-year-old woman, of both British and Bangladeshi nationality, who at the age of 15 left Britain to join ISIS, believing in its anti-western ideology. The British government deprived her of her citizenship (which it was able to do because she held another) but, held in a camp for ISIS sympathisers after the defeat of that organisation, she decided that she wanted to return to Britain, where she would be considerably more comfortable.

There is agitation from human rights organisations and lawyers to allow her back into the country so that she can be present in the country while the case for her return is argued in the highest court in the land—at public expense, of course. It is perfectly obvious, however, that once back in the country she will never leave it again: deportation will in practice be impossible. This, her supporters know perfectly well; they also know that it is likely that, if she returns, she will be a burden on the British taxpayer for a considerable time.

My scheme as applied to this case would permit Shamima Begum to return, but strictly at the expense of those who wish her to do so, who, I suspect, might suddenly become both rather less numerous and vociferous. Among other benefits, it would cut out the vastly expansive legal shenanigans involved (a further reason human rights lawyers would dislike the scheme).

But they need not worry. No such scheme will ever be implemented. Shemima Begum will be allowed to return to Britain and the taxpayer will foot the bill for years to come. For today, our moral betters prefer charity that comes at no cost to them.