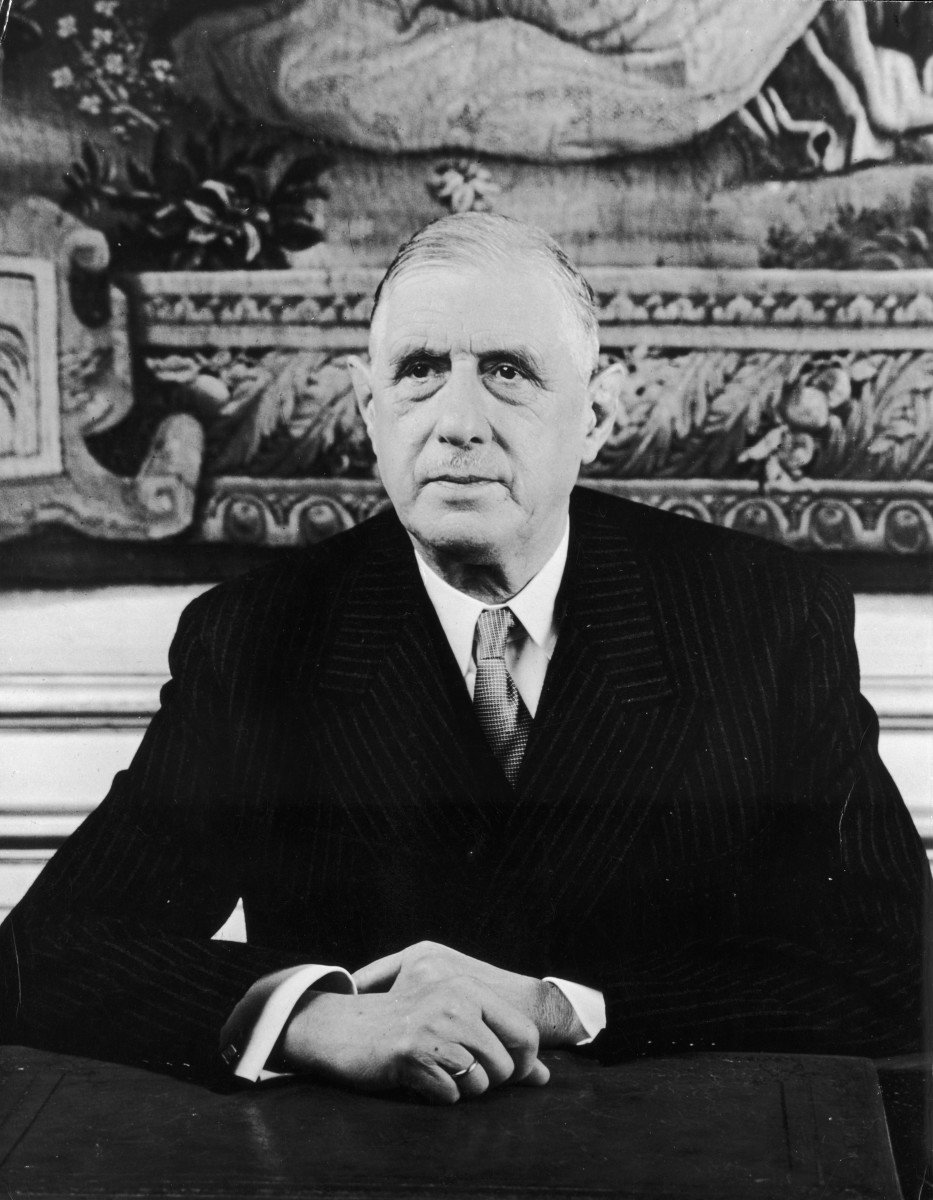 In his amusing play The Odd Couple, Neil Simon depicted a bizarre pair, the slovenly and easy going Oscar and the tidy, neurotic Felix. By chance, recent events have presented the opportunity to comment on an incongruous political duo, with totally disparate characteristics  and contrasting styles of behavior, Charles de Gaulle and Donald J. Trump.

Karl Marx wrote that all great world historical facts and personnages appear for the first time as tragedy and the second time as farce. It would be fallacous and unfair, as some critics have done, to asign these roles to the French and American leaders, especially the latter. Indeed, the two agree on what is their central issue, reshaping policy in making their country great again, playing an independent role in international politics as well as accenting the creation of internal prosperity, and challenging the accepted consensus position.

Chancellor of Germany Angela Merkel, campaigning for a fourth term, expressed in a beer hall rally in Munich on May 28, 2017 her disapointment with the statements and behavior of President Donald Trump at the NATO summit conference in Brussels on May 25 and at the G7 meeting in Taormina on May 28, 2017. Trump had not told his fellow leaders in both venues what they wanted to hear, on climate change, trade, Russia, and explicitly on U.S. committment to Article V of the North Atlantic Treaty. He did tell them emphatically to their discomfort that they were not paying their equitable share of NATO expenses, and in addition critized European trade and immigration policies.

Merkel is clearly unhapy about Trump’s nationalism, American first policy, and protectist outlook, but she did not specifically respond to Trump’s blunt message that most of the 28 members of NATO were not fulfilling their obligation to provide at least 2% of their GDP for defense purposes. Her response is that Trump is not a reliable partner, and that Europe must take its fate into its own hands. The time, she said, in which we could completely depend on others, is, to a certain extent, over.

By coincidence, reminders of this argument over independent action are present as a result of an incident in a small French village, about 150 miles from Paris. Despite its name Colombey-les-Deux-Eglises, the small village, population 736, about 150 miles from Paris, has only one church. The claim to fame of this peaceful village is that it was the home of Charles de Gaulle who lived there from 1934 until his death in 1970, and is buried there in the local graveyard. In the village a museum is dedicated to de Gaulle, and there is a monument shaped as the Cross of Lorraine, the symbol used during World War II by the Free French movement that de Gaulle founded and headed.

The village has come to attention because on May 27, 2017 vandals damaged the tomb monument to de Gaulle in the cemetary, destroying the cross at the top. The outrage was probably the work of a disturbed individual without any apparent political motive. Yet recent electoral political results raise doubts. In the first round of the presidential election on April 23,  2017, right wing candidate Francois Fillon got 38.54% of the vote, Marine Le Pen 31.23%, and Emmanuel Macron 11.26%.  In the second, final round on May 7, 2017, Le Pen gained 54.76% of the vote and Macron 45.24%. The village is clearly oreinted in a rightward political direction.

All the candidates in the election, in one way or another, invoked the memory of de Gaulle and claimed the inheritance of  a brave soldier, an extraordinary, towering figure in French history, in spite of the fact that de Gaulle for the most part stood aloof from political parties until he founded the Fifth Republic in 1958. However, it was  de Gaulle’s strong assertion of French independence that found echoes in the political rhetoric of the candidates and can now be compared with the equally strong if more bluntly expressed argument of Donald Trump.

In fervent fashion, though he was not an authoritarian figure, de Gaulle personified popular sovereignty, often referring to  himself in the third person as Julius Caesar did by speaking of himself, in Gallic Wars, as “Caesar” not “I.”  He expressed this emphically in his speech of Janury 29, 1959: “By virtue of the mandate the French people have given me and of thenational legitimacy that I have incarnated for 20 years.” This was a justifiucation of his refusal to acknowledge the legitimacy of the French Vichy regime which in August 2, 1940 had sentenced him to death by court martial in absentia for challenging the French regime by creating the Free French movement in London to resist the German Nazi occupation..

De Gaulle is honored in many places. including Carlton Gardens in London where a plaque remembers him as the President of the French National Committee that occupied the building as its headquarters from June 18, 1940 on. Though only a newly appointed Brigadier-General he was the leader of Free France from 1940-44. and president of France 1958-1969.

Of course, considering their differences in grace, charm, elegance, behavior, and personal morality, Charles de Gaulle and Donald Trump are an impropable duo, but they are analogous in one respect, their fierce assertion of their country’s independence to act alone if necessary, action which causes consternation among other countries . That consternation increased with de Gaulle’s expression of his view that no nation has friends, only interests.

De Gaulle expressed this in an ungenerous way when on August 25, 1944 he celebrated his entrance into Paris after the city was liberated from Nazi control. Though U.S. forces had really done most of the fighting, de Gaulle remarked  of the city.”Liberated by itself, liberated by its people with the assistance of the armies of France, with the support  and assistance of the whole of France.”

Winston Churchill was not the only person who thought of de Gaulle as an “unpleasant and impossible” individual. But he also understood the difficult nationalist. De Gaulle, he wrote, had to be rude to the British to prove to French eyes that he was not a British puppet.”

President Trump was similarly rude and discourteous in emphatic stress on American nationalism and priority, pride of country, and his sense of mission. In this regard Trump resembles de Gaulle whose opening statement in Memoires is that France is not really herself unless in the front rank and that our country must “aim high.” Trump is expressing about the U.S. though in a different way de Gaulle’s remark that France cannot be great without grandeur.

De Gaulle and Trump, for all their differences, are similar in various ways. Both express themselves by direct appeal. De Gaulle remarked in The Edge of the Sword: “one does not move crowds other than by basic feeling, violent images, brutal innovations.” Trump promoted American unity in his populist-like rhetoric. De Gaulle and Trump both quarreled with supposed partners: de Gaulle with Britain and the U.S., and Trump with fellow members of NATO.

In his politics of French grandeur, de Gaulle withdrew France from NATO’s military command, launched an independent nuclear development program, and proposed a Europe of sovereign states rather than a supranational Europe. Similarly Trump, so far, has been cautious about the value of  international organizations, even if still supportive of NATO.

in a number of hand written documents, de Gaulle revealed himself as a lonely, embittered, and often angry person while believing in himself as  the embodiment of France. He was critical of the U.S. for their World War II  strategy, as Trump is critical of NATO policy.

Finally, there is an intriguing resemblance between the two leaders regarding Russia. Criticizing American World War II policy, de Gaulle praised the Soviet Union  for making war without restrictions, and that why he was warmer  to it more than to any other country. He congratulated Stalin in November 1942 on the 25th  anniversary of the Russian Revolution. Trump is unlikely to offer similar congratulations to President Putin, but one wonders whether the seemingly unending current Congressionsl inquiries into Trump administration relations with Russia will reveal a similar warmth towards Russia.

PrevTime to confront local Islamists: this is war
Leading Muslim Group Calls for Ramadan ‘Jihad’ Alongside Trump, Farage, May HeadshotsNext