Chemical Weapons and US National Interest 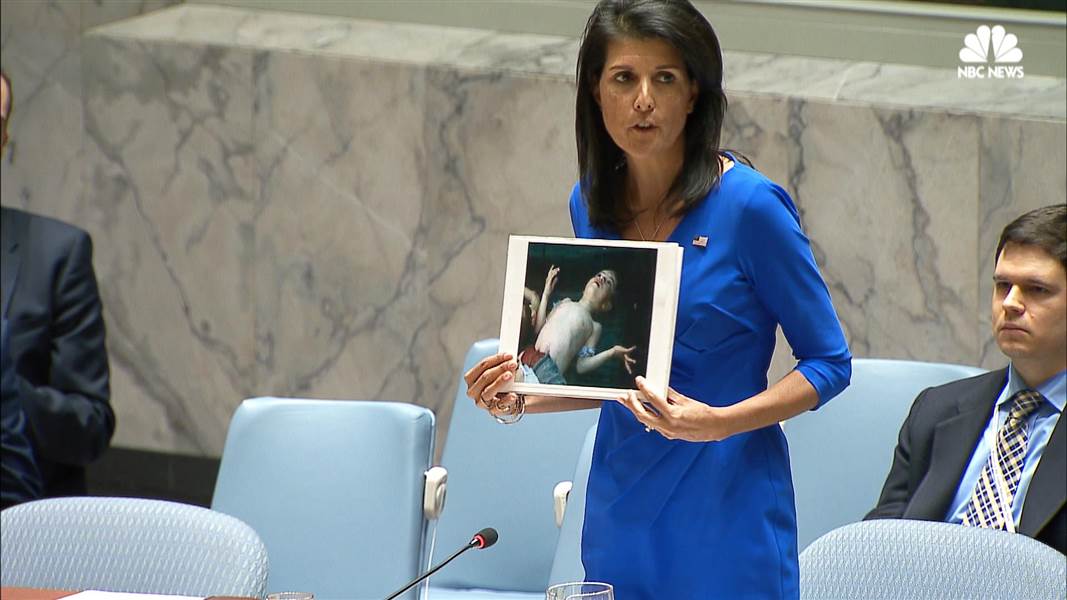 Perhaps the most moving poem with imagery evoking the horror of the first World War is Dulce et Decorum est written in October 1917 by Wilfred Owen, the British writer who died a year later, aged 25. His condemnation of the use of gas against people haunts us today.

It is not clear which country, France of Germany, first used poison gas in that War. But the most memorable occassion was the use on April 22, 1915 by Germany of  lethal clorine gas against French colonial, mostly Algerian, divisions, at the second battle of Ypres. About this horror of the use of gas, Owen wrote ,”In all my dreams, before my helpless sight, he plunges at me, guttering, choking, drowning.” Clorine did produce choking and suffocation, but the contending armies in the War soon used stronger gases, phosgene and above all, mustard gas.

The world is now aware of at least one country which has stockpiles of such weapons and uses them against so called enemies of its regime. Syrian President Bashir Assad has the dubious honor of being champion of this activity, and has illustrated this on a number of occasions spreading terror by targeting civilians with chemical weapons .

President Assad is one of the world’s great prevaricators and a ruthless individual. He has denied ever using chemical weapons, but in fact has killed his foes with chemicals that are nerve agents. These include sarin which is almost impossible to detect because it is clear, colorless, and tasteless. His first event of international significance was the use of rockets filled with gas fired at rebel held suburbs of Damascus on August 21, 2013 killing more than 1,400.

This was the moment of truth for President Barack Obama who had stated that the use of chemical weapons was a “red line” that would lead to “serious consequences ” for the Assad regime. When the red line was crossed, Obama did not engage in any meaningful consequences, serious or not. As recently as April 14, 2017, Leon Panetta, former Secretary of Defense under Obama, stated that the Obama administration “failed to enforce the red line but sent a message of weakness to the world.” This inaction of Obama indeed became sybolic of his whole foreign policy.

That weakness was not mitigated by the deal arranged by Russia and the US that Assad would not be punished but would give up his stockpile of chemical weapons. Predictably, Syria gave up some of them, but still controlled a certain amount. Some of these were used on April 4, 2017  when Syria attacked a rebel held town, Khan Sheikhoun in northwest Syria. Aircraft dropped bombs filled with sarin on that area, killing more than 80 people.

President Donald Trump responded, two days later, to the use of gas by ordering a direct attack by 59 Tomahawk cruise missiles at the Shayrat airbase that, according to the Pentagon, has been used to store chemical weapons and was the base from which Syrian aircraft had left to kill people by nerve gas. The base, parenthetically, was notable for other reasons: it is  the base where Russian made Su-22  and MIG-23 planes were housed; it is used by Hezbollah and Iranian backed Iraqi fighters.

The President did not seek Congressional approval for his action but he did explain his change of heart in dealing with Syria. He was moved by the affront to humanity with the “killing of women, small children, and beautiful little babies.” Trump, alluding to his predecessaor, and evidently moved by the use of gas, declared the Syrian attack crossed “many, many, lines beyond a red line.” It is generally accepted that Trump had used US military power in a precise and proportional manner against the use of chemical weapons.

However,  however laudable the Trump response on April 6, the US action raises important questions, especially because Trump has not yet formulated  a broad statement of US policy or the means by which it will be implented. One can anticipate certain strikes in Yemen, continued fighting in Syria and Iraq, possibly more strikes on Assad, and above all the war against ISIS.

Nevertheless, the country needs to speak with a unified voice, and decide on the desirability or not of global action and international commitments. Trump is not an isoltionist, but clearly, according to campaign rhetoric, does not wish to be drawn into the affairs of other countrires, and is not anxious to be involved in foreign entanglements, responsibilities, and alliances. Hence the contradictory positions of Trump on the US role in NATO.

In this regard the issue of the national security of the US comes to the front. President Harry Truman signed the National Security Act in 1947 which established the National Security Council to advise the President. But the Act did not define national security, and the problem remains for each administration to define and implement it in relation to specific issues. After the strike on April 6, Trump declared, “it is in the vital national security interest of America to prevent and deter the spread and use of deadly chemical weapons.” The action sent a signal, but does a signal make a policy?

The US in international affairs is central because of its political assets, wealth, and military power. It is worth considering some complex issues. Does everyone agree that the April 6 attack was in the nation’s vital national interest? Should the US take the lead in preventing and detering the spread of deadly chemical weapons, a task in which all civilized nations should be involved? Should US policy be based on upholding justice, and on establishing stability over disruption? Should policy be influenced, if not based on humanitarian intervention for violations of human rights, and providing aid where neccessary? Or should the US  concentrate on preventing the emergence of a threat to world order as well as to the US itself?

A difficult problem, which the Bush adminidstration tried to confront, is whether the US has a mission to bring about democracy in the world? Altruism and empathy are desirable in international affairs as in life, but force is often necessary as well as diplomacy and soft power to deal with offenders. What one can say with assurance is that the outlawing and action against the use of poison gas in any of its forms is an essential moral imperative. In this case Trump has upheld desirable values.