I haven’t seen this reported in any national newspaper yet, or on TV. If it is I missed it in my search earlier. But it is being reported in plenty of local newspapers, and what you might call the ‘trade press’ for social care and law enforcment. I have consulted reports dated yesterday and today from newspapers in Tower Hamlets, Aberdeen, Yorkshire, Durham and Warwickshire.

The latest strand of The Independent Inquiry into Child Sexual Abuse, which started today (Monday 21st) will take evidence from victims and survivors of child sexual exploitation and representatives of police forces, local authorities, Government departments and charities.

They will analyse the current nature and extent of the issue across England and Wales, as well as institutional responses including from County Durham organisations which will give evidence on Wednesday.

In her opening remarks to the latest pillar of the investigation – the inquiry into institutional responses to child sexual exploitation by organised networks – lead counsel Henrietta Hill QC  said: “What seems clear is that cases of child sexual exploitation are under-reported and that the numbers of children affected are much higher than official records would report or suggest.

“We know from research that the big picture is that many thousands of children are sexually exploited each year.”

The latest section of the wide-ranging IICSA will draw evidence from a range of complainants and organisations to assess how networks including grooming gangs have been able to operate. It will explore themes such as the adequacy of risk assessment and protection measures for vulnerable children, whether victims were shown appropriate empathy and concern, and measures taken to successfully disrupt offenders.

The IICSA was set up in 2015 following claims from a complainant known as “Nick” of a murderous paedophile ring linked to Parliament operating in and around Westminster. Nick, real name Carl Beech, was later discredited and jailed for 18 years for what a judge called his “cruel and callous” lies.

The inquiry has investigated the actions of celebrities, politicians, police, religious groups and schools, among others.

Although it found no evidence of a paedophile ring in Westminster, it has already found that the political establishment spent decades turning “a blind eye” to allegations of child sexual abuse, with high-profile politicians protected from police action as whips sought to avoid “gossip and scandal” which would damage the parties.

The investigation into organised networks is due to last for two weeks.

It follows a series of high-profile criminal convictions of known abuse and exploitation networks in Telford, Rochdale, Oldham, Oxford and Peterborough. All of these well known trials involved Muslim gangs originating from several parts of the Islamic world; however the ‘M’ word hasn’t been mentioned yet in specific relation to perpetrators.

Junior counsel Antonia Benfield told the inquiry (of one girl who was first raped as a 12-year-old.): “She was bullied and desperate for affection. She was regularly reported missing (from home) and picked up by police, reporting sexual abuse.

Ms Benfield said the girl was still a young teenager when she was “abducted by a group of men and forced to have oral sex with 23 men while a gun was held to her head”. She was also raped, the inquiry heard.

Ms Benfield added: “She considered she was failed by social services and by the police, she also feels there was a lack of co-ordination between agencies tasked with protecting her.”

She (further) spoke of one victim in Rochdale identified as “Daisy” who was age 12 when she was put in contact with a network of men by a school-friend’s prostitute mother. “Daisy was forced into sex and abused at 13 and was made pregnant at 14,” Ms Benfield said. “She was passed around for oral sex with 150 men.”

A police operation began which led to the Rochdale Grooming trial where “Daisy” gave evidence. Nine men were jailed. These were Muslim men from a largely Pakistani background

In another case, fellow junior counsel Paul Livingstone described how a 14-year-old girl abused by men while in a care home claimed staff “colluded with her abusers” by suggesting the men “collect her by car near the children’s home, rather than outside it”

Chief Supt Sue Williams, who now heads Scotland Yard’s key child protection unit, has been called to explain the Met’s policy at the inquiry looking into how Tower Hamlets and five other local authorities around the country respond to child abuse.

The East End isn’t immune from networks preying on children, even during the pandemic lockdown, according to the QC representing Tower Hamlets in the inquiry. “There is a very real threat to our community,” Cleo Perry told yesterday’s opening hearing. “These networks change tactics, building on frontline skills. Exploitation became more on line during Covid.” 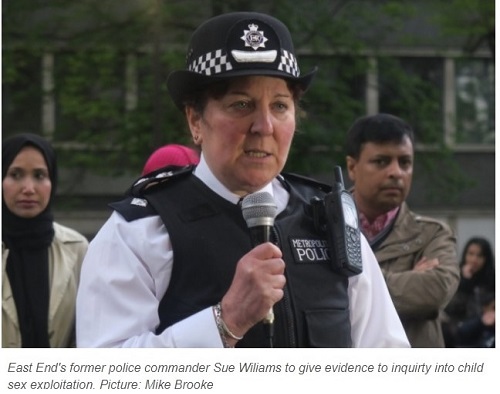 The QC revealed: “We are working with religious leaders in the community, meeting mosque leaders and the Osmani Trust to protect young people exposed to exploitation.” There is no doubt that Muslim children are also at risk, and deserve protection.

A special London-wide child safeguarding unit has now been set up at Scotland Yard headed by Chief Insp Williams who left east London in 2019 to get it under way.  The post was created in response to HM Inspectorate investigation into child protection services in 2016 which also criticised police services.

The Met’s Chris Butterfied told yesterday’s opening hearing: “You’ll be hearing from Sue Williams who is now head of our safeguarding. Improvements have been made, but more work need to be done to improve child safeguarding.”

The council set up a child exploitation team in 2018 following a scathing Ofsted report the year before which exposed gaps with many cases slipping under the radar that were unknown to its safeguarding service.

I am not alone in being certain that it is happening in London, but by smaller scattered groups who don’t have a pool of vulnerable white working class girls from the big estates from which the taxi drivers and kebab merchants can take their pick.  There has been nothing come to court yet, or not reported if it has.  The 1989 Children’s Act has child and victim-blaming narrative, the hearing was told. But Tower Hamlets was now working from an alternative approach. Making “a cultural change”, however, would take time.

The Labour MP for Rotherham (Sarah Champion) submitted a statement at the Independent Inquiry into Child Sexual Abuse (IICSA) Monday.

A statement read by Ms Champion’s solicitor Haafiz Suleman at the inquiry today said that the tendency from institutions to only act when child sexual abuse (CSE) is reported to them, rather than seeking it out, was “the enemy of joined up thinking”.

“[Being reactive] prevents institutions from drawing meaningful conclusions by forcing them to deal with incidents of CSE in isolation. We want to be entirely clear on this point, reactive approaches ruin lives.”

She added how authorities needed to look at the “big picture” rather than incidents in isolation, and to be “constant” in efforts to abolish abuse instead of “box-ticking”.

Following the Rotherham CSE scandal, which remains an ongoing investigation with two further arrests made last week, Ms Champion launched a cross-party inquiry to examine whether existing legislation around abuse was fit for purpose. This also led to the banishing of the term “child prostitute” from legislation.

On one hand that term has connotations of consent by the girl working as a prostitute which of course, she is too young to consent to, even if she had a choice, which abused, traumatised, enslaved and threatened girls don’t have in any meaningful sense. On the other it does convery the brutal and evil nature of what they were effectively enslaved to do, in a way terms like ‘abuse’ and ‘sex exploitation’ and the bland abbreviation CSE don’t in my opinion. Some of these girls believed themselves to be in a relationship with these men. The cruel old-fashioned word ‘prostitute’ hammers home the squalor of what they were made to do.  But that’s just my opinion.

“The onus shouldn’t be on victims to come forward and give psychologically damaging witness evidence, but on police, local authorities and schools to disrupt CSE in a proactive manner. CSE is a crime. What the panel needs to recognise is this – describing children as ‘vulnerable to CSE’ is to put the cart before the horse. All children are vulnerable. It’s the organized networks who exploit them.”

I’m particularly interested in what is reported about London so I will be keeping an eye out for further reports.

PrevWhy Does the U.S. Want to Designate Qatar ‘A Major Non-NATO Ally’?
ROUND MIDNIGHT AT THE HOUSE OF MYSTERYNext