These reports of persecution are in the Christian press a lot, but now at last, they are making it into the mainstream news. This is today’s Telegraph.

A Christian girl has been taken into care in Pakistan after allegedly being abducted by a Muslim man who forced her to marry him and kept her chained up in a cattle pen. . . This most recent case is of a girl from the city of Faisalabad, in Pakistan’s eastern Punjab province, who was allegedly abducted near her home on June 12 last year. In August the Telegraph reported this case of a 14 year old girl, which is very similar.

The girl spent five months chained up in the pen in the yard of her 45-year-old captor’s home, where she was forced to work all day clearing the animals’ dung, her family claim. They said that when she was rescued by police last month, she had cuts on her ankles left by the shackles put on her by captor, who is also said to have raped her repeatedly.

The Telegraph knows her identity but is not disclosing it to preserve her privacy.

In a statement to Aid to the Church in Need, her father said that she had been raped multiple times. He added: “[She] has told me she was treated like a slave. She was forced to work all day, cleaning filth in a cattle yard. 24-7, she was attached to a chain.”

He claimed that despite his repeated pleas, it was not until September that police allowed him to file an official complaint. One police officer allegedly called him a “chuhra,” a term of derision for Christians that translates loosely as “latrine cleaner”. Another officer, he said, threatened to register a blasphemy case against him.

He also disputed the findings of a court-commissioned medical report – carried out to assess whether the girl was underage – which found she was around 16 or 17. His daughter’s birth record proved she was only 12, he said. The court has placed the child in a women’s refuge pending further inquiries.

The case has now been taken up by human rights groups, who say the family’s initial complaint to police went ignored for three months. They claim that every year, hundreds of girls from Pakistan’s Christian and Hindu minority groups are abducted and forced into Muslim marriage, with the justice system often turning a blind eye for fear of offending Islamic hardliners. 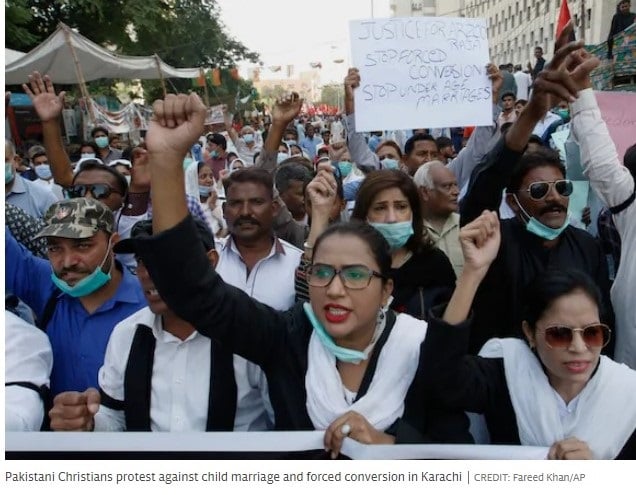 They say that Britain, which gives £302 million in aid last year to Pakistan, should insist that more is done to counter prejudices against minorities and challenge institutionalised tolerance of sexual abuse.

John Pontifex, of Aid to the Church in Need,  which campaigns on behalf of persecuted Christians worldwide, said the case “called into question” the effectiveness of UK overseas aid. “Pakistan has for many years been the top recipient of UK aid and the premise for it has been the need to tackle extremism, abuse of girls and people from minority faiths,” he said. “Yet when push comes to shove, cases such as this show that Pakistan is doing very little both to help the victims and bring the culprits to justice.”