The reports about this are mainly from Youtube and Miss Tash’s own ministry website for  DCCI Ministries (Defend Christianity, Critique Islam). I have found one written report by UKNIP (News in Pictures)

At  3.34pm Police attended Hyde Park to reports of a female with stab wounds. A female is now being treated with minor injuries. The man who carried out the attack made off shortly after and was chased by a number of people shortly followed by the Parks Police.

The woman was injured and treated by Armed police officers before being taken to hospital for further treatment. The man all dressed in black made off from the scene.

A crime scene has been put in place and an investigation has been launched a second man was also assaulted in a separate attack.

Officers have established a crime scene where both attacks have taken place. A spokesman for the Met Police said Police have found a knife discarded nearby following the incident

Readers might recall that Miss Tash, who preaches and points out the flaws in Islam regularly at Speaker’s Corner in London’s Hyde Park has been assaulted by unhappy Muslims before. Last year T0mmy R0bins0n was arrested there for breaching Covid regulations when he attended to express moral support. The police have warned her that her safety is at risk, but she will not be stopped in the Lord’s work. 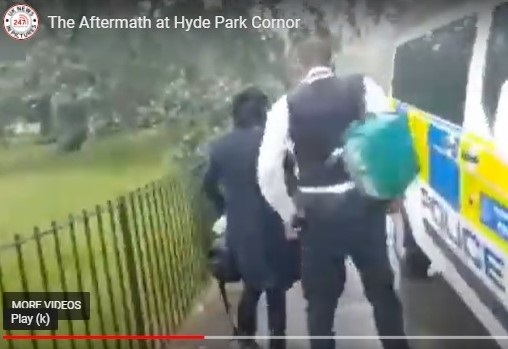 A further longer video shows her with blood along her cheek and temple. She fainted but was administered first aid and on coming round she was still able to berate the surrounding Muslims for their foolishness. She was steady enough to walk to the police van while an ambulance was awaited.  I am looking for an update on her condition tonight. For over a century Speaker’s Corner has been a bastion of free speech and lively debate; not no more.

The Daily Mail has a report, not naming her, and unaware (or declining to mention) her Christian ministry; they give the possible motive her Charlie Hebdo T-shirt.

The Westminster division of the Metropolitan Police have put out an appeal for witnesses here.

Officers attended and found a 39-year-old woman suffering from a minor slash injury to her head. She was treated at the scene by the LAS before being taken to a central London hospital. Her injuries are not life-threatening.

Detective Superintendent Alex Bingley, from the Central West Command Unit, which covers policing in Westminster, said: “This was clearly a very distressing incident for the woman involved and officers have spent time with her, whilst she was being treated for her injury, to get an account of what happened.

“We know that this assault was witnessed by a number of people, many of whom captured it on their phones. I would ask them, if they have not already done so, to contact police.

Witness? Videos are all, over the internet. I’m from India and even I saw that.

The Free Speech Union say Our thoughts are with Hatun Tash, the ex-Muslim-turned-Christian preacher stabbed at Speakers’ Corner today. We have written to the Metropolitan Police twice now urging them to do a better job of protecting her.

PrevBritney Spears and the Costs of Celebrity
IDF and Mossad Concur: With Iran, It’s the Death of a Thousand CutsNext