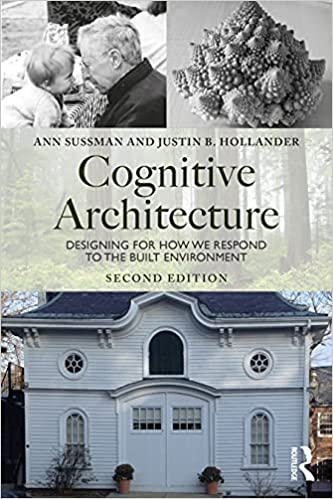 This expanded second edition of a book that originally came out in 2014 reviews new findings in psychology and neuroscience. It points out that human beings are sophisticated mammals who arrive in the world with built-in responses to their environment, something brainwashed products of ‘schools of architecture’, all indoctrinated into the Cult of Modernism, simply do not understand at all, at any level. The authors discuss biometric tools which might assist designers to understand subliminal human behaviour and get them to analyse designs before they are built and inevitably fail. This will be an uphill task, as Vested Interests are firmly entrenched in professional organisations (e.g. the RIBA) connected with architecture and planning (including reptilian journalists and ‘critics’ who unquestioningly swallow the Creed), in the construction industries, in the manufacture of building components, and among politicians and decision-makers.

The wastelands created to cater for that destructive monster, the motor-car, are everywhere to be seen, as are the results of many years of indoctrination in ‘schools of architecture’, all inimical to human beings. Most new developments separate various parts into zones, destroying any sense of urban cohesion, and hostile to exploration on foot (not that there is ever anything worth exploring in Modernist dystopias). Getting rid of the street, of course, was a prime aim of that autistic, Swiss-born, myopic monster, Charles-Édouard Jeanneret-Gris (1887-1965), who, like all totalitarians such as ‘Stalin’ and ‘Lenin’, adopted a pseudonym.

‘Le Corbusier’, as he called himself from c.1920, then presided, like a deified malevolent carrion-crow, over architectural indoctrination with results that are painfully obvious to all those not desensitised and still capable of connecting their optic nerves to their brains. What ‘architectural education’ actually does is to desensitise students, so that they can only look with their ears, that is see what they are told they see, rather than what is actually there. Their minds are thus corrupted and their perceptions and thinking processes deformed. Sussman and Hollander demonstrate in this book how uncorrupted, reasonably normal people actually see buildings, and they do so in ways that differ enormously from how the damaged goods graduating in so-called architecture are bullied into ‘seeing’. Indeed, what those unfortunates are forced to regard as ‘architecture’ is not architecture at all, but an almighty assault on human sensibilities and wellbeing, and the world is paying for it all, yet politicians and commentators go on accepting failure after failure, disaster after disaster, without questioning the incompetence, colossal waste of resources, and barmy cult responsible for them. ‘Le Corbusier’, a stranger to empathy of any kind, a bully, a humourless bore, a shouter of slogans, a weirdo obsessed by extreme notions concerning hygiene, was but one of an Unholy Trinity of Modernists, the other two being Germans who became Americans, having failed to work their dubious charms on that left-wing revolutionary Party, National Socialism, not for want of trying (no reasonable, informed person nowadays could ever label the National Socialist German Workers’ Party ‘right-wing’). Those were Georg Walter Adolf Gropius (1883-1969), who stuck to his given names, and Maria Ludwig Michael ‘Miës van der Rohe’ (1886-1969), who dropped ‘Maria’ and ‘Michael’, and changed his surname, which was originally ‘Mies’. Now ‘Mies’ has connotations with what is seedy, poor, rotten, lousy, wretched, bad, crummy, and out of sorts (a Miesmacher is a defeatist, a grouser, a killjoy, an alarmist, and a Miesepeter is a misery-guts), though its cuddly pussy-cat soothing sound in English conjured different associations, so as part of his reinvention as a Modernist to keep in with Gropius und Gesellschaft after the 1914-18 war, he did a bit of self-invention, starting with the addition of an Umlaut, tréma, or diæresis to the ‘e’ of his surname, which became Miës, free now from any meaning, unpleasant or otherwise. In 1921 he added van der Rohe to the Miës, so the new, pretentious tag sounded vaguely grand as well as reassuringly Dutch. Both Gropius and Mies (as he then was) served in the German Army during the 1914-19 war, and Gropius was wounded and probably mentally damaged by his four years in the Army. Mies did not apparently serve on the Western Front, but his experiences in a war that killed 13% of German males born between 1880 and 1899 and wounded millions, many mentally, must have had a massive impact on his personality. Indeed, both men shed any links with the past in their involvement in architecture from the end of that terrible war. Sussman sees connections between the design of trenches and other protective structures on the Western Front and Gropius’s architecture, especially his own house at Lincoln, MA: of that I am not so sure.

The authors of this important book show us in biometric studies how ‘normal’ (neurotypical) people see buildings and how those with autistic tendencies perceive them. I have long held the view, shared by commentators such as Anthony Daniels (2015, in his ‘The Cult of Le Corbusier — Quadrant Online’ [https://quadrant.org.au/ magazine/2015/09/cult-le-corbusier/]), that ‘Le Corbusier’ met the diagnostic criteria for autism spectrum disorder (ASD): these include impaired social communications, repetitive behaviour, abnormal fixations (e.g. with excessive hygiene and a warped perception of how concrete was used), and lack of interest in and empathy for others, all hallmarks of a genetic disorder. That someone so impaired should provide a truly deified cult-figure says strange things about human behaviour, yet there is ample evidence of the hysterical following commanded by monstrous figures such as Adolf Hitler (1889-1945), and the ruin that results. It is no accident that Mies’s gnomic remark that ‘architecture is the will of the epoch translated into space’ was used, almost verbatim, by Hitler, many of whose ex-cathedra sayings were very close to slogans spouted by Gropius’s colleagues, the Bauhäusler. In fact, the Modern Movement in architecture was and is an abnormality, a totalitarian assault on humanity, and humanity is paying dearly for that. It is time such baleful influences were stopped and entirely rejected.

If the 19th century could be seen as the age of engineering, when there were massive advances in transport, urban hygiene, and urbanisation, perhaps the 20th might be perceived as a century of advances in chemistry and physics, as well as one of unparalleled destruction in war and through Modernist architecture and townplanning, and the 21st, hopefully, as a century of biology, when ecology, human well-being, and even the survival of the planet itself took on a new importance, though the prognosis is not encouraging. Certainly, the inhumane ways in which architecture and planning have evolved over the last hundred years or so have to be turned round and stopped before more destruction occurs, and techniques such as those described by Sussman and Hollander employed to bring sanity back to the creation of the environments in which humans have to live.

Professor James Stevens Curl is working on a book on English Victorian Churches, due for publication in 2022. His Making Dystopia (2018) has received global praise and abuse in equal dollops

PrevAfghanistan: No long-distance travel for women without male relative and Co-education is against Islamic values
Maoist Thought in Medical SchoolNext