To London for Brexit Day celebrations. Warning, I am an aged gammon and couldn’t last the course. Nigel Farage’s party was due to start at 9pm and finish at 11.15 after whatever has been contrived to announce 11pm in the absence of Big Ben. I got there early enough to photograph some of the preparations, meet friends, soak up the atmosphere and eventually (once we got into a pub which was accepting customers) have a beer. The party is ongoing as I write and I have permission to use photographs taken by braver, more vigorous friends.

As I came across Trafalgar Square The Veterans,led by their piper were marching to their platform in Whitehall for their disco party.

Trigger warning – the DJ was playing some very good 1970s glam rock. A young policeman observing was quite startled at an elderly woman (me) who knew most of the words of Sweet’s 1974 hit Ballroom Blitz.  Also Showaddywaddy and T-Rex

That set the mood very nicely. We had been warned that regulations governing Parliament Square are that no alcohol was permitted and no music other than incidental music between speeches. So a good rousing pop and rock reportoire in Whitehall was welcome.

The Mall leading to Buckingham Palace was lined with Union flags.

A friend spent his afternoon observing the Remainer’s sad farewell to Europe, with promises to campaign to return. This woman fancies herself as some sort of Eurowoman super hero. 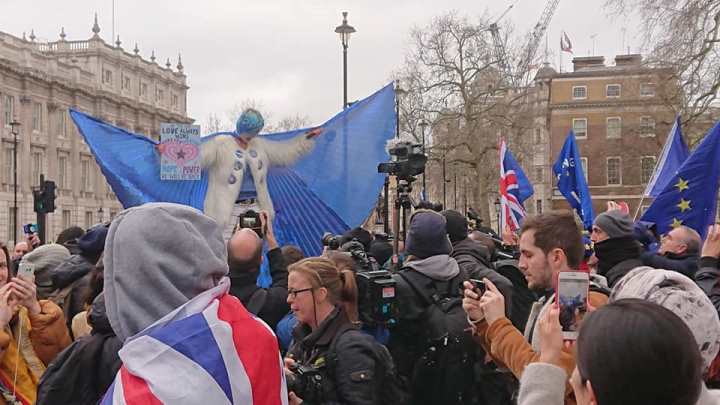 He also followed their farewell march from Whitehall to Europa House in Smith Square and I am on a promise of a photograph when he can send it later.  Later – thanks mate.

He also met some French supporters of Brexit who aspire to their own liberation Frexit in due course. 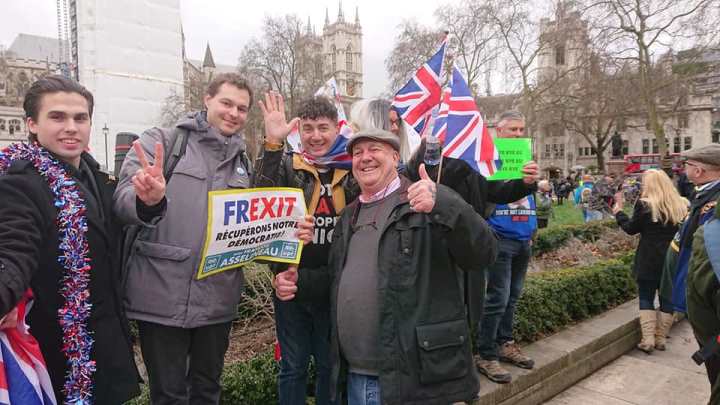 This is what was happening in Parliament Square when I arrived.

You might have noticed that many of the people present and celebrating are young and/or of an ethnic minority. It is not true that all us Brexit voters are old, decrepit and white (I’m more of a party pooper) and need to die (soon and preferably of a good flu, is one suggestion)

As you can see the Queen Elizabeth Tower which contains the famous clock and its bell Big Ben is undergoing a massive restoration. The famous chimes are silent but were brought into use specifically for Remembrance Sunday in November and New Years Eve.  We were told that it would be too expensive to reinstall the temporary floor needed for the bell to chime 11 times at 11pm today; so a crowd fund raised £500,000 (despite the same operation in November and December only costing £40,000). But still the bell will not chime. I believe a recording will be used. There was supposed to be an illuminated clock on the walls of No 10 Downing Street but I couldn’t see it. Unless it is only in the bit that the Prime Minister, other ministers and officials have access to.

Parliament Square filling up over 2 hours in advance of Nigel Farage’s presentation.

The London Eye in the background, the other side of The River.

As it got dark the red, white and blue illumination of some of our public buildings showed to good effect.

Viscount Alanbrooke and the Ministry of Defence. 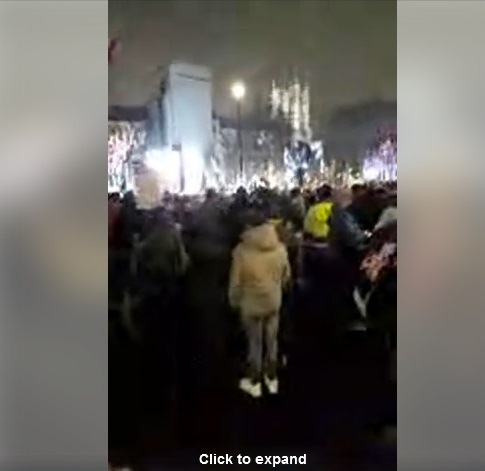 Back at Parliament Square my friend describes the atmosphere as ‘banging’. Which is good. This is the scene a few minutes ago.

I’m going to give the TV coverage some better attention as 11pm approaches.

The BBC really didn’t want to cover the events in Parliament Square for a second longer than they needed to. The clock projection on Downing Street wouldn’t have been visible to the public and was pretty pathetic. 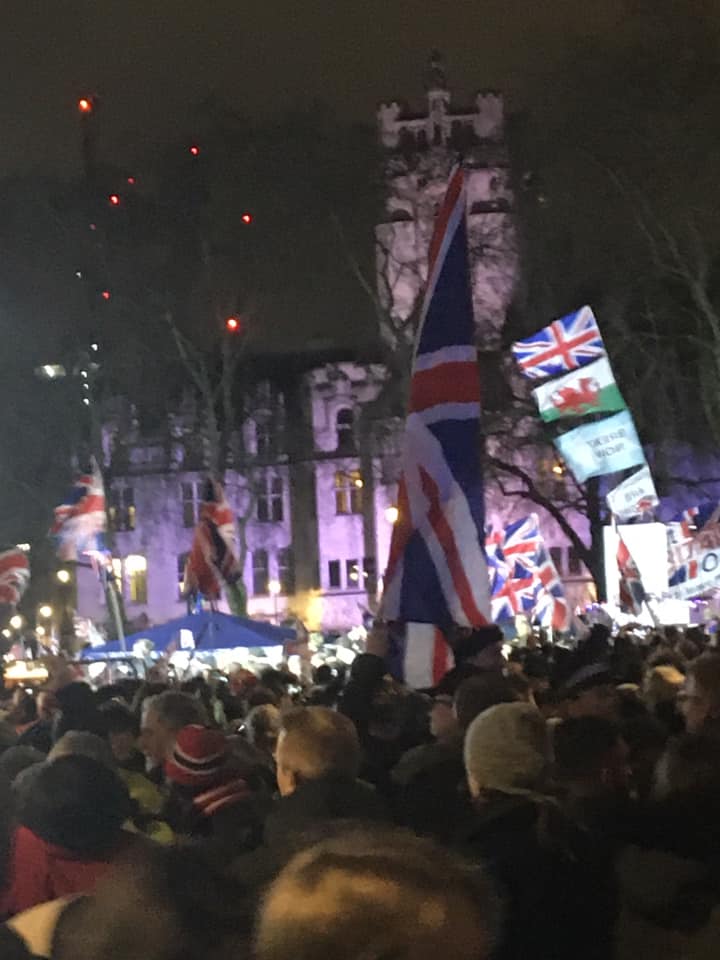 Meanwhile out in the ‘burbs fireworks are going off down my street.