Dealing with the Devil: Nazi Villains 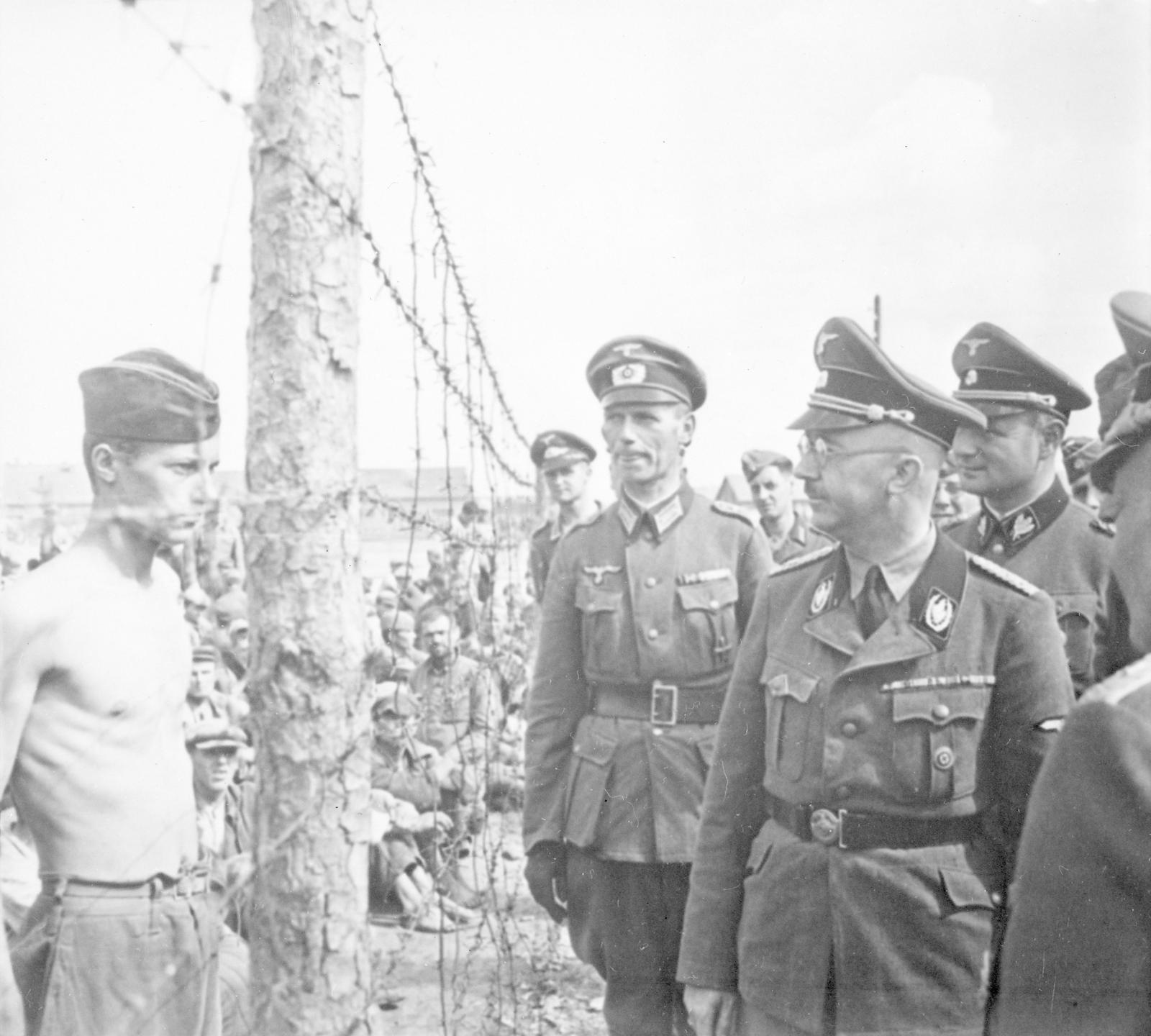 I come to bury Nazis, not to praise them. The evil they did lives after them. No good is interred with the bones of the villains.

The memories of the horrors of the German Nazi regime never end. Revelations of its activities and personnel keep coming. Two new such revelations have become public in the month of May 2020. One is the exact location of the graves in a Nazi extermination site was found on the outskirts of Chojnice in northern Poland. The other is previous unknown information of the capture and death of the notorious Heinrich Himmler.

Chojnice was a place where by mass shootings, beginning with three residents as early as September 15, 1939, two weeks after the German invasion of Poland, and continuing until January 1945, the Nazi SS executed 1,000 locals including 200 psychiatric patients. Recent systematic researchers found remains, bullet shells, clothing, buttons, cufflinks, medal fragments, in the outskirts of the town and in surrounding areas. Many of the bodies of the individuals who were shot and buried in ditches had been burned to hide the evidence of the deed. This massacre was considered part of the Nazi “action against the intelligentsia.” The SS had formed and used paramilitary groups, Selbstchutz, German nationals living in Poland, anxious to settle old disputes and to loot property, to help manage the people. Historians have long known that mass killing had taken place in the area, popularly known as “Death Valley,” but had not previously found the exact location, are now able to pinpoint it.

The second new revelation was the unearthing of the false papers used 75 years earlier by Heinrich Himmler, who was captured, disheveled and wearing an eye patch, by British army forces on May 22, 1945. Himmler was detained at Meinstadt near Bremervorde after the British found that he was using papers of a sergeant named Heinrich Hizinger which contained an official stamp that British intelligence knew was used by fleeing Nazi officials trying to evade arrest and punishment. After Hitler died, Himmler had escaped to Flensburg, then to a hideout in the Harz mountains. While he was being interrogated by British intelligence on May 23, Himmler took a cyanide pill hidden in his mouth and immediately died. The irony was that without the particular official stamp on his false papers Himmler might have escaped.

A bizarre end for an evil doer. Himmler, born in 1900  in Munich, son of a school teacher, was a a man with poor eyesight, had been an agricultural student, who at first joined the SA, the extreme paramilitary organization headed by Ernst Rohm, but he was soon attracted by Hitler’s oratory. Himmler was an early member of the Nazi party, which he joined in 1923, and took part in the failed abortive Beer Hall putsch in November 1923, led by Hitler and General Erich Ludendorff.  Himmler was a prime mover of the arrest and death of Rohm and the end of the SA  on the “night of the long knives” on June 30, 1934.

Himmler rose rapidly in the Nazi organization, becoming propaganda chief,1926-1930, and in 1929 head of the SS, Schutzstaffel, Hitler’s personal bodyguard. Under Himmler, the SS grew from a 290 man battalion to a paramilitary army of almost a million. He became president of the Gestapo secret state police in 1933, and set up Dachau, the first concentration camp. In 1936 he became head of the German police.

Himmler was not a military figure but a tough ruthless commander who used the SS to train dogs that could rip people apart. His official position was Reichsfuhrer of the SS, and he controlled almost two million SS troops, 300,000 Gestapo, and 30,000 concentration camp guards. He was ambitious. Among his plans, never fulfilled, were to make Holland an SS state and deport the entre Dutch population to the east, and another to set up after the war a Ukraine as a German colony.

Himmler will live in infamy as the director of the killing of six million Jews and perhaps as many as 500,000 Romani people, the implementor of the Final Solution, in charge of concentration camps, and of the use of gas in Auschwitz. The story is probably true that in 1941 he was present at the shooting of 100 Jews by firing squad in Minsk, and was sickened by it. He was concerned that if this method continued it might affect the mental health of his SS carrying out the deeds, and thought of alternative methods of killing, less painful for the sensibilities of his men, and thus used poison gas.

Realizing that Germany was losing the war, and concerned with self-survival, Himmler tried to reach a peace arrangement with the Allies.  As a result, Hitler stripped him of all duties and his rank. But he had already made the most revealing forthright stark statement about his and the  Nazi objectives in his three hour speech to SS officers  in the Posen Castle in west Poland on October 4, 1943. He was absolutely clear. The Jewish race is to be exterminated. For the SS it was the hardest and most difficult of tasks. The Jewish people must be made to disappear from the face of the earth.  He praised the SS for its work in the policy of extermination. “We have carried out this task for the love of our people, and we have suffered no defeat within us, in our soil, in our character.” But silence of the genocide was best, “We will never speak of it in public.”

In November 1944, in an effort to escape future punishment, Himmler ordered the gassing of Jews to be halted. But he was disobeyed  by two other Nazi leaders, General Ernst Kaltenbrunner, fanatical Austrian antisemite who was chief of the RSHA, Main Security Office from January 1943 until the end of the War,  and the General’s childhood friend, Adolf Eichmann.

Exactly sixty years ago, on May 24, 1960 David Ben Gurion in a short statement to the Knesset announced that Adolf Eichmann was in Israel under arrest and would shortly be placed on trial under the law for the trial of Nazis and their collaborators. Capital punishment has been outlawed in Israel except for crimes against the Jewish people and crimes against humanity, for which the penalty could be death.

After the war Eichmann fled. Germany. After a complex operation by Mossad and Shin Bet, Israeli security agency, he was abducted from Argentina where he was living in Buenos Aires using the false name of Ricardo Klement.

Eichmann was brought to Israel and appeared before a hearing in Jaffa where he admitted his true identity and was told he could obtain his own defense counsel. He was tried on 15 charges in a trial that was televised in Jerusalem District Court, and he testified behind a glass booth to protect him. Eichmann is unique, the only person to receive the death penalty in Israel. On May 31, 1962 he was hanged, his body was cremated, and his ashes were scattered on the sea, outside of Israeli territorial waters.

Eichmann, born in Solingen in Prussia but then a resident of Austria, had joined the Nazi party and the SS in 1932, and then the SD, security service, Sicherheitsdienst, of which he became the head, the department responsible for Jewish affairs. In 1938 in Vienna he helped organize Jewish emigration from Austria. In 1939 he was transferred to Berlin, and headed the Reich Central Office for Jewish emigration for the whole country

Eichmann arranged for Jews to be put in ghettoes in major cities. He was regarded by Reinhard Heydrich as the specialist in Jewish affairs, and became his special aide. One of his ideas, in  August 1940, was a plan for resettlement in Madagascar of a million Jews a year for 4 years  but this was not implemented. After the Wansee Conference on January 20, 1942, where the policy of genocide was decided, Eichmann became the liaison office for all institutions involved with that policy, and responsible for the deportation of Jews to extermination camps. He was officially in command of Division RSHA IV B 4 of the Gestapo, the agency responsible for Jewish affairs and deportations in German occupied Europe, to carry out the Final Solution. If not a policy maker, Eichmann was in charge of all operations. Like Mussolini, he made the trains run on time, and made sure they were used to transport Jews to their death despite the need to transport men and material for military reasons.

In fanatical fashion he was responsible for deportations in Hungary, April to August 1944, when he oversaw four transports of 3,000 Jews a day to Auschwitz, 437,000 were sent to their death. In spite of orders to stop the transports, Eichmann persisted, and sent additional trains from Budapest. He also forced thousands of Jews to march from Budapest to Vienna in July 1944.

At the same time In June 1944 Eichmann entered into negotiations with Rudolf Kasztner, Hungarian Jewish lawyer, to send 1685 Jews to safety in Switzerland, in change for diamonds, gold, and $1,000 a person. The train, which contained some of Kasztner’s relatives, left Budapest on June 30, 1944 while the deportations to Auschwitz were continuing. Kasztner was assassinated in Israel in 1957.

The Eichmann case raises questions, For many the controversy in this “goods for blood” transaction still exists: was Kasztner a hero or a collaborator? A more general issue is present as the result of the letter of May 29, 1962 written by Eichmann to Israeli President Itzhak Ben-Zvi, asking for pardon. He stated he detested the “greatest of crimes perpetrated against the Jews.” However, he suggested the “need to draw a line between the leaders responsible and the people like me forced to serve as mere instruments in the hands of the leaders. I was not a responsible leader, and as such do not feel myself guilty.”

Of course, Eichmann did not personally kill anyone or initiate the policy of the Final Solution. But he willingly implemented that policy with enthusiasm, visited Auschwitz on a number of occasions, helped select the site for the gas chambers and approved the use of Zyklon B, the cyanide gas used in extermination, and ensured the supply of victims for the Holocaust. Dayenu, that would be enough to justify a death sentence.