Death Takes a Hallyday in Paris 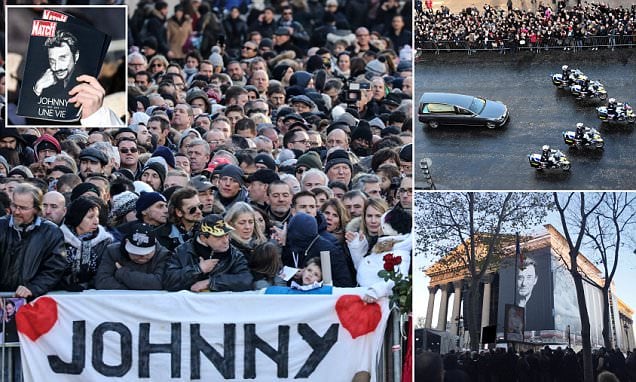 He and the song are gone but the melody lingers on. Outside of France he was the greatest rock singer you never head of. Yet on December  9, 2017 a large police convoy escorted his white coffin from the Paris suburb of Marnes-La-Coquette, via the Arc de Triomphe and the Champs Elysees to the funeral service at the Madeleine Church in central Paris. Thousands of people lined the route, waiting hours to be spectators at the ceremony, and to pay tribute to a legendary singer, now regarded as a French monument. The ceremony at the famous Church was attended by an astonishing assembly, French President Emmanuel Macron, ex Presidents Francois Hollande and old friend Nicholas Sarkozy, leaders of the church, and well known celebrities of stage and screen, such as Marion Cotillard and Jean Remo and others.

This was not a state funeral, but it was ordered by Macron as a substitute, an extraordinary elaborate send off for a distinguished individual, one unusual in the French secular state, particularly when the proceedings included St. Paul’s First Letter to the Corinthians. The event with its enormous crowds in attendance, presence of 1500 police officials, 700 motor bikers, helicopters, was unusual in a Church , a temple to Napoleon’s army and the site of Chopin’s funeral in October 1849, and normally reserved for France’s important political leaders or great writers like Victor Hugo.

The city of Paris paid tribute. The Eiffel Tower was illuminated with a sign “Merci Johnny,” honoring the remarkable  Johnny Hallyday, the singer who started life as Jean-Philippe Smet, and died after a long illness of lung cancer aged 74 on December 6, 2017.  Banners in the assembled crowd echoed the theme “Johnny, je t’aime.”

At the funeral service President Macron spoke warmly of Johnny. “He was part of us, a part of France…we’re here today because of him, almost 60 years in music and he is there, still there, always there.” He is a monument of French song.

Hallyday was indeed that, a legend in France. Yet though he brought U.S. rock’n’roll to France, starting in the late 1950s as an American style rocker he never achieved similar fame in the United States as in his own country. His career as a singer started when he was influenced by U.S. rock’n’roll records, and a film of Elvis Presley, Loving You. He fell in love wth U.S. rock and translated it into French. He introduced France to U.S. songs, taking them from the most well known, like Presley and Chubby Checker and singing them in his own version in French.

Hallyday was essentially and unmistakenly French, but he had a love affair with the U.S. Early in his career, he sang an album of America’s Rockin’ Hits, but never made it big in the U.S. though he appeared on the Ed Sullivan Show, in Las Vegas in 1996,  lived for a time in Los Angeles, and rode his Harley-Davidson in the California Desert. He did however have rapport with American performers, especially Jimi Hendrix who on a number of occasions opened Hallyday’s act.

His career in France lasted 57 years, with changing and eclectic musical styles, rocker, hippie, performer of rock opera Hamlet in 1976, blues, and country, later developing a deep operatic tone, selling more than 110 million records, and appearing in more than 20 films, often with cigarette dangling from the corner of his mouth. He was, as a result of the emotional response to his singing, one of the world’s best selling performers. France heard music when it looked at him.

Halliday’s fame and the hysteria surrounding him as a handsome, sexually charged rocker, matinee idol, was also linked, like that of the Beatles and Rolling Stones to a colorful lfe, at first with his blond hair in a pompadour, almost an imitation of James Dean. His life was turbulent, bad-boy image, five high profile marriages, two to the same woman, two attempted suicides, drugtaker, financial problems, dodging  high French taxes by residing in Gstaad, Switzerland, a motor cycle accident. One saving grace is that he appeared to be one of the few people in France who refused to be seduced by Edith Piaf.

He was an extraordinary mixture of the old French values, hard work with non-stop tours, and plain speaking, love of country, on one hand, and adoption of  new technology, on the other hand. He was a mixture of enthusiam and depression, a victim of a colon cancer operation that went wrong, an individual who fell from the heights  and redeemed hinself. He was worthy of the honor when President Jacques Chirac awarded him Chevalier of the French Legion of Honor in 1997.

By coincidence the ceremony honoring Johnny, faults and all,  appeared in a week in which two other important personalities, faults and all, were presented on the TV screens. One was presented in the episode in The Crown  featuring the Duke of Windsor, formerly King Edward VIII. His less than admirable career included admiration for and a visit to see Adolf Hitler in 1937, his giving the Hitler salute on another occasion, and his meetings with Nazi leaders, Rudolf Hess, Joachim von Ribbentrop, and Joseph Goebbels. Britain was fortunate that he abdicated the throne so the country could meet the menace of German Nazism. Windsor would not be accorded burial in Westminster Abbey or St. Paul’s Cathedral, the London equivalents of the Madeleine Church in Paris.

Another TV show presents an unexpected and unpleasant view of John F. Kennedy. He is portrayed less as the charming and inspiring leader, and popular President of legend and more as a womaniser, jealous husband, and taker of a mixture of drugs to cope with his medical problems, colitis, prostatitis, and Addison’s disease.

By contrast, Hallyday the French bad boy who sang of love became, as the result  of the sound of his voice,  part of the glories of French life and the history of song in France. But also, with the songs he sang,  part of the United States culture has entered into the portals of the  national Pantheon in France. Johnny symbolizes a love affair between France and the United States.