Did We Have an Insurrection at the Arizona State Capitol? Just Askin’ 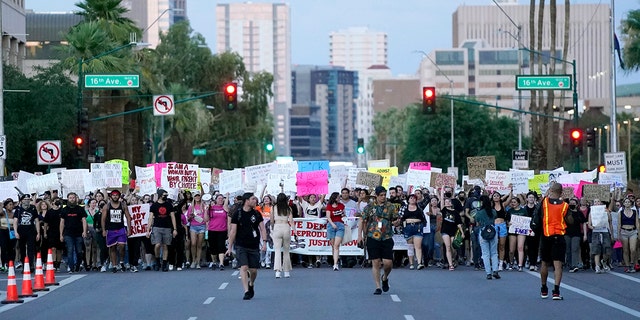 On Friday evening, while the Arizona legislature was still in session voting on bills in the Arizona State Capitol building in Phoenix, several thousand protesters, enraged over the US Supreme Court decision on abortion, descended on the building, threatened to break through the glass doors, vandalized outside monuments, and had to be dispersed by police using tear gas. All the while, lawmakers, many of whom later reported having felt like hostages, were evacuated by police.

The comparisons between this event and the January 6, 2021 event in Washington are obvious though the Arizona incident pales in comparison to the Washington incident. But the question is being asked by many: Was what occurred in Phoenix Friday night an insurrection-as many label January 6, an insurrection designed to stop or influence lawmakers inside who were deliberating on other issues?

Just to be clear, I condemn both incidents. Whether January 6 represented an actual attempted insurrection is a matter for debate, but here is my point: Will the reactions to Friday night be similar to the January 6 reactions? In other words, will there be a US Department of Justice investigation, and will charges be brought against the protesters in Arizona-those that can be identified after an exhaustive investigation? Will those charged be held for a year or so in solidarity confinement? Will there be prison sentences? Will there be Congressional hearings? Will our news media, led by CNN, spend the next year or so condemning what happened in Arizona?

Of course, to be fair, there are contrasts, especially in terms of severity. Nobody was killed Friday night, no police officers were assaulted or injured, and apparently, nobody actually breached the Capitol building. There was no vote ongoing to validate the Supreme Court decision on Roe vs. Wade.

But things did get out of hand in Phoenix, and police had to defend the Capitol from being breached by a mob of thousands of angry protesters while lawmakers were inside conducting the People’s business. It went beyond a peaceful protest.

Of course, hypocrisy cuts both ways, and those who would condemn Friday’s incident in Phoenix but excuse January 6 can fairly be accused of hypocrisy-whatever you think of the 2020 election and whatever you think of the Supreme Court’s decision on abortion. I did not like the results of the 2020 election, and I still have my doubts about what occurred on Election Night in places like Philadelphia, Atlanta, and Milwaukee. I am opposed to abortion, but I think I can understand the anger of those on the other side of the debate.

All of which is irrelevant as far as I am concerned because I condemn both incidents and I concede there are distinctions in terms of severity. But if what happened in Arizona Friday night has disappeared from the news in a couple of days-or not reported at all by certain news sources, then somebody is guilty of hypocrisy.