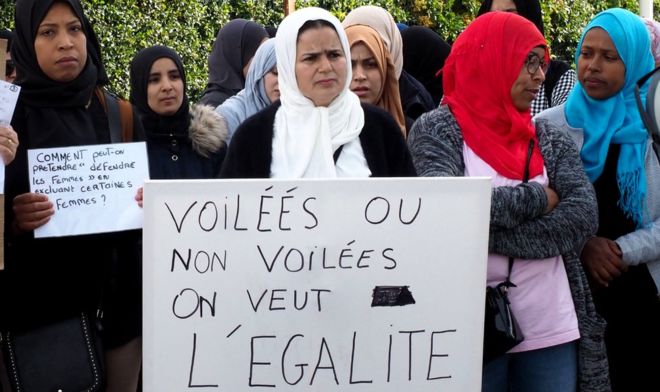 The cautionary tale is here.

French President Emmanuel Macron has warned against “stigmatising” Muslims or linking the Islamic religion with the fight against terrorism.

“We have to stand together with all our fellow citizens,” Mr Macron said during a joint press conference with German Chancellor Angela Merkel on Wednesday.

riticised her for wearing an Islamic headscarf in public.

That “French woman” — a Muslim — was not criticized for “wearing an Islamic headscarf in public.” She was criticized for deliberately breaking the French law which prohibits wearing the hijab in government offices. The regional parliament building she entered, accompanying her son’s class on a field trip, is such an office.

France has about five million Muslims.

It is the largest Muslim minority in Western Europe.

Wearing the Muslim headscarf or veil – known as a hijab – is banned in French schools, government offices and some other public buildings.

France is officially a secular state and body-covering garments have been at the centre of a number of controversies in recent years.

Last week, a Muslim mother who wore a headscarf during a school trip with her son to the regional parliament in Bourgogne-Franche-Comté in eastern France received verbal abuse from the chamber.

The BBC has it wrong. There was no “verbal abuse” directed at this Muslim mother. She was simply informed, by a member of that parliament, that wearing the hijab in the parliament building was prohibited, and that her refusal to remove the hijab a deliberate “provocation.”

An image of the woman – given the name Fatima – embracing her son was widely shared after footage of the incident was posted on social media.

The woman, “Fatima” in the news accounts, is being depicted as the put-upon victim of a right-wing French Islamophobe, who dared to demand that her hijab be removed. But what was his crime? Julien Odoul, the member of the regional parliament who raised the issue, only requested that she be asked to remove her veil. For the law says that the hijab is banned in government offices, and the parliament certainly qualifies as such an office. Odoul mentioned that the teachers, pupils, and accompanying parents had entered the “hemicycle” – that is, had passed among the parliamentary benches. That should have been the end of the matter; it’s a government office, and Fatima should have complied either by removing her hijab, or removing herself from the parliament.

The issue became confused when discussions began about whether whether the hijab could or should be banned on school trips.

It [the contretemps at the parliament building, over the request for the Muslim woman to remove her hijab] also sparked street demonstrations in the area and has renewed a national debate over the Muslim veil. France currently has no law banning mothers from wearing the hijab on school trips.

It is true that banning the wearing of hijabs on school trips has not yet been passed into law. But it did pass the French Senate, and may yet be adopted by the National Assembly. It is certainly reasonable to argue that not just in the schools, but in school-related events, including sports competitions, school fairs (Kermesses), and field trips that serve a pedagogical purpose and thus can be considered as part of the school day, the hijab should be banned. But that was not the relevant question here. The only thing that counted was that the mother, as she knew perfectly well, was  in a government office. And hijabs were banned.

On Wednesday, Mr Macron called for a better understanding of the Muslim religion in France and condemned what he described as the “fatal shortcut” of linking Islam with terrorism.

“There is a lot of irresponsibility among political commentators,” he said, adding: “Communalism is not terrorism.”

Yes, by all means, let’s have a better understanding of the Muslim religion, beginning with Mr. Macron himself. If he has not yet read and studied the Qur’an by now, he is guilty of criminal negligence. And it appears that he has not, for he condemns those who, having read and studied the Qur’an, have quite reasonably found a link — many links – between what the Qur’an contains and Islamic terrorism. There are many verses in the Qur’an commanding Muslims to wage violent Jihad against Infidels, including a number specifically calling on Muslims to “strike terror” in the hearts of those Infidels. It is not the islamocritics who should be chastised by the likes of Emmanuel Macron. It is he who still refuses to recognize reality. And when Macron calls for a “better understanding of the Muslim religion in France,” it is he who needs to “better understand” that fanatical faith. He should start by reading the most violent verses of the Qur’an. Here are a few that Macron would do well to read and study first: 2:191-193, 3:151, 4:89, 8:12, 8:60, 9:5, 9:29, 47:4. These verses, and a hundred more, instruct Muslims to attack and kill and terrorize Infidels. Muhammad himself, in a well-known hadith, boasted that “I have been made victorious through terror.” Macron owes the people of France that study.

Someone should ask Macron, in public,  if he has read and understood the Qur’an. He can’t possibly respond “no.” Then the questioner should follow up, by reading out to him, in public, a dozen of the most disturbing verses. Once those verses have become known in such a fashion — no putting the genie back in the bottle — it will be hard for Macron to justify his attack on those who link Islam and terrorism.

The incident at the regional parliament building in eastern France occurred during a school trip on October 11, in which Fatima accompanied her young son.

A politician from Marine Le Pen’s far-right National Rally – formerly known as the National Front – saw her during a debate and ordered her to remove her veil.

He was especially exercised at this flouting of the law just a week after the latest murders in France by a Muslim terrorist: “After the murder of our four policemen, we cannot tolerate this [provocation],” he wrote.

Here is the French text he posted on Twitter:

And here is an English version, with some phrases added to make the meaning clear : “In the name of our republican and laic principles, I requested that Marie Guite Dufay tell the woman who was one of the mothers accompanying the pupils, and was sitting ‘among the benches,’ to remove her hijab. After the murder of our four police officers, we cannot tolerate such a deliberate provocation.”

In an interview with the group Collective Against Islamophobia in France (CCIF), Fatima said she was sitting quietly in a corner of the room when she heard someone shout “in the name of secularism.”

“People started screaming and getting upset,” she told CCIF (in French), adding: “The only thing I saw was the distress of the children – they were really shocked and traumatised.

“I tried to reassure them… my son approached me and jumped on me, crying. I told them I could not stay.”

Little children crying. People screaming. The horror and cruelty of it all. All nonsense, of course. Julien Odoul, the arch-villain of the piece, had only asked the presiding speaker, Marie Guite Dufay, to have “Fatima,” in accordance with French law, remove her hijab, which could not be worn in such places as the parliament. ” “Fatima” surely knew the law, and was indeed engaged in a deliberate provocation, seeing if she could get away with breaking that  law. To make matters worse, much of the French media has treated her as a victim, not as a lawbreaker. And the parliamentarian Julien Odoul, who only requested that the law be obeyed, has been pilloried, absurdly, as a “right-wing Islamophobe.”

Don’t expect Emmanuel Macron to stand up for French laws. He wants everyone in France to “stand together.” An impossible task. Where has a Muslim population anywhere managed to “stand together” with non-Muslims? Some days Macron seems to be talking semi-sense about Islam. And other days – not so much. And on still other days, he spouts intolerable nonsense. This was one of those “still other days.” Whether the candidate facing Macron ends up being Marine Le Pen or her niece Marion Marechal or even Eric Zemmour, a new election can’t come fast enough.