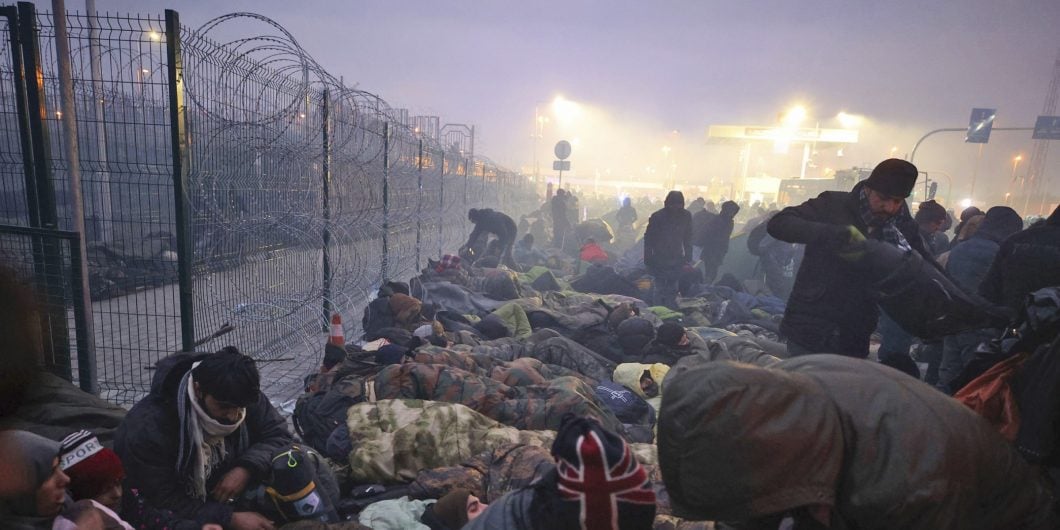 The crisis on the Polish-Belarusian border has exposed the multiple ambiguities, not to say hypocrisies, of European governments about mass immigration into Europe from outside the continent. On the one hand, the sceptical population is subjected to a considerable propaganda effort to persuade them that multiculturalism has been and is a glorious development, without which their countries would stagnate culturally and economically (L’immigration est une chance pour la France, “Immigration is France’s luck,” is a phrase often heard, usually without much in the way of qualification).

On the other hand, as soon as a wave of immigration threatens, the rhetoric changes: it is the duty of each country to welcome its share of the migrants so that the burden is spread. Oddly enough, people who say this rarely or never consider where the migrants themselves wish to go. They are to be moved around like the pieces on a board game without consideration for their own wishes or feelings.

On this view, it also matters little where the migrant comes from: a migrant is just a migrant, bringing no special qualities or characteristics with him; the only thing that determines his fate, good or bad, once he has migrated, is the manner in which he has been treated by the receiving country. Any difference in outcome between various groups of migrants is to be attributed solely to the prejudice, positive or negative, of the host country. This avoids the necessity, and even the inclination, to look a little more closely at groups of immigrants, which is time-consuming, difficult, and sometimes dangerous. Multiculturalists often display a remarkable lack of interest in the actual divergences in the diversity they praise, and retreat behind generous-sounding generalisations.

President Lukashenko of Belarus has encouraged thousands of migrants to come to his country with a view to pressuring the European Union, which suggests that he knows full-well that for all their moral posturing, European countries regard mass migration as a curse rather than a blessing. Democratic politicians have to pay at least some attention to the majority wishes and sentiments of their electorates, and therefore cannot be seen as welcoming to successive waves of immigrants, even if in practice they do little to arrest them.

The migrants who have accumulated on the Belarusian-Polish border have, of course, no intention of staying in Poland, and Mr. Lukashenko is fully aware of this. For the migrants, Poland is but a way station to Germany and perhaps to Scandinavia, France, and even Britain (surprisingly, the majority of immigrants illegally crossing to Britain have passed through Germany). In other words, in trying to prevent the migrants from entering Poland, the Poles are working on behalf of other Europeans. From the point of view of Poland’s strict national interest, it matters not a jot whether or not the migrants enter Poland, because they will not stay there for very long. Indeed, Poland itself could use the migrants as pawns to pressure the European Union into abandoning its current anti-Polish stance. The fact is that Poland is what stands between the European Union and a potential new wave of destabilizing migration.

Here it is worth pausing just to spare a thought on the human cost of what President Lukashenko has done. Irrespective of one’s attitude to mass immigration, the people whom he has encouraged to come to Belarus are human beings liable, like all human beings, to great suffering. The evidence suggests that they were deliberately misled into believing that passage to Europe would be easy or trouble-free; and even if they were not the poorest of the poor in their own countries (for otherwise they would not have been able to afford the passage to Belarus), no decent person could witness their current plight without much sympathy. Counting on the near-boundless sentimentality of the liberal conscience, Lukashenko hoped that scenes of such suffering would first force the Poles to admit the migrants, and then allow him to blackmail the Europeans by promising more of the same unless they paid up—in short, he is a Slavic Recep Erdogan.

But genuinely virtuous sentiment and human feeling is, alas, not a good guide to policy. Many people surely experience in their own minds a conflict between sympathy for individual migrants and the wish that they, the migrants, should not be too numerous, even if the migrants to be excluded should be individually no less worthy of sympathy for the difficult lives they have led than the individual migrants with whom they sympathise. It really is a question of numbers and how they should be regulated: and it is very rare that those who believe that prosperous, democratic countries have a deontological duty to extend a welcome to the poor, the suffering, and the oppressed of the world condescend to state the numbers they think these countries have the duty to take in, either in total or every year. Perhaps they think that the demand for entry will spontaneously evaporate as the differential in the living conditions in the prosperous and other countries declines or disappears, either because the prosperous countries become impoverished, or the impoverished countries grow richer. In the meantime, though, increased disposable income in the poorer countries is likely to increase rather than decrease the demand for migration, insofar as migration is now expensive and more people will be able to afford it.

The division in attitude to mass migration occurs even within families. I remember two of my French brothers-in-law discussing the question, one a businessman and the other a government functionary of soixante-huitard sensibility. The first eventually became exasperated with the second and exclaimed, “All right, take ten Malians into your home, you have the room!” But the second replied that he was arguing for collective effort, not the effort of individuals such as himself. As Oscar Wilde said, sentimentality is the desire to have the luxury of an emotion—in this case, awareness of one’s own generosity—without the willingness to pay for it. It is even better, of course, if you can make someone else pay for it.

It is an embarrassment for the Europeans that a government that a few days previously they had been decrying as authoritarian, dangerously nationalist, and even protofascist, is now doing their work for them, to their obvious relief. And it is even more embarrassing because it is doing so by using the very methods they so sententiously denounced Donald Trump for having used. The Polish-Belarusian border has turned into Europe’s Rio Grande. But either states have a right to decide who enters and lives in them or they do not: and if they do, which is surely the case until world government decrees otherwise, they also have the right and perhaps even the duty to take such measures as building a wall to keep would-be migrants out. This is not to say that walls in general are, or any particular wall is, very effective in curbing mass migration, but alternatives in a situation such as the current one are not many.

There is a division of opinion even within a single government, let alone within society itself, about how to deal with this situation. The French Secretary of State for European Affairs said that he was not in favour of “a Europe which bristles behind barbed wire or covers itself with walls”  but he was also “for a Europe which is not naïve and maintains its borders.” He wanted the European frontier police (Frontex) to be deployed, as well as “humane practices and respect for the rights of migrants” but did not indicate how all these desiderata were to be reconciled. What would the Frontex police do or refrain from doing that the Polish were not doing or not refraining from doing? No indication given.

Another minister, that for Citizenship (an Orwellian title, if ever there was one), Marlène Schiappa, said, “The European ideal cannot be, in my humble opinion, a Europe of walls, nor a divided Europe. It must be a united Europe respectful of human rights which finds solutions to this completely fabricated crisis.” To deploy such drivel against Lukashenko would be like sending out Stan Laurel to fight Mike Tyson.

On the other hand, another member of the same government, the Minister of the Economy, Bruno Le Maire, said that “a sovereign state has the right to protect its frontier and access to its territory by the means it thinks legitimate. It is up to Poland to decide if a wall or any other means are the most efficacious.”

A possible centre-right candidate for the forthcoming presidential elections, Valérie Pécresse, said that she totally supported Poland but that she wanted no wall to be built between Poland and Belarus. Alas, such cowardly nonsense is not confined to the French political class but is very widespread if not quite universal throughout the west.

One almost prefers the lucubrations of the French left, as exemplified by Jean-Luc Mélanchon, another of France’s sempiternal candidates. At least he makes clear his death wish for his own country. “That a country of the former Soviet bloc wants to construct a wall against the freedom to come and go: what a shameful regression . . . First give these poor people warmth [it is freezing on the border] and put an end to the reasons they leave their country.”

Alas, this death wish is also quite prevalent, and sometimes determinant, in the Western world. Let the heavens fall, so long as I feel good about myself.