Eurovision and Lack of Vision in the Gaza Strip 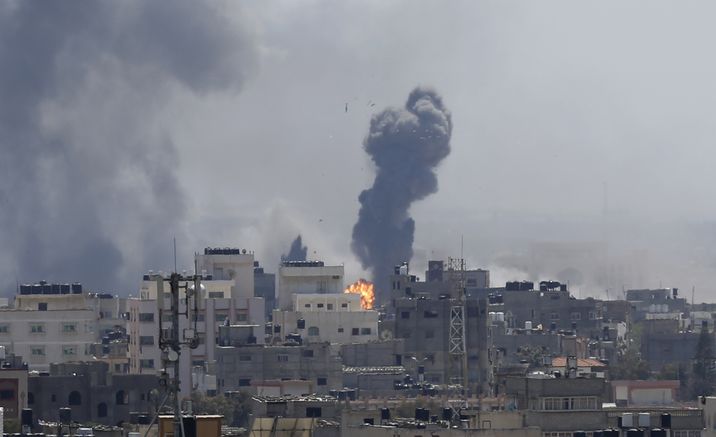 Peace will be a little late this year, a little late arriving in the Gaza Strip, the 139 square mile Palestinian area ruled by Hamas that borders the State of Israel on the east and north for 32 miles. Since in 2007 it replaced Fatah as the ruling power in the Strip, Hamas has used the area to launch increasingly powerful rocket attacks against Israel, even after Israel in 2005 ended its blockade, though it has varied its tactics and intensity of warfare, depending on political considerations.

“How many meals could you buy with the money it cost to launch all those 700 missiles against Israel,” asked a Lebanese journalist on May 6, 2019 of Palestinian leaders in the Gaza Strip? He received no answer. By coincidence the real answer is to be found this month in the streets of London in the notices put up in bus stops, all with the real Palestinian position, “Israel’s killing children again. Enjoy your weekend.” The same messages were then circulated on British social networks.

Friction in Gaza does not stop. Hamas persists in a policy of armed resistance, provoking Israeli retaliation in short battles, often ending after one day, and initiating actions and explosive devices that have led to three wars. Once again, fighting occurred on May 3-5, 2019 between Israel and Palestinians. It ended with a cease fire on May 6, seen by the Palestinians as a “big achievement,” and as having “deterred Israel,” but it not evident what the deterrent was from. Truth is a commodity in short supply among Hamas. One simple falsehood was not revealed until May 7 when Hamas finally admitted the truth, that a malfunction of one of its own rockets killed a baby and its mother in Gaza, not Israel that at first had been falsely blamed.

Recent rounds of fighting between the two sides have ended relatively quickly with informal truces organized by Egypt or the UN. It was not an Olympian thunderbolt launched by Zeus, but the wounding by Palestinian snipers of two Israeli soldiers that began the two-day hostilities. Israel responded with air strikes to the over 700 missiles launched in the two days. Israel used its Iron Dome Antimissile system to destroy many, but not all, of the missiles, and also used jets, drones, tanks, artillery, and attack helicopters. Casualties were 29, 25 Palestinians in Gaza, and four Israeli civilians. On May 5, 219 a cease fire was declared, the details of which have still to be worked out.

Israel is in a dilemma realizing there is an enemy, a foe, even worse than Hamas in Gaza. What is menacing is the increasing role of Palestinian Islamic jihad, IJ, the Iranian financed group that varies in relationship with its rival Hamas in collaboration or conflict. More extreme than Hamas, IJ has not only denounced the Israeli blockage of Gaza, and claimed some Israeli territory, but it is prepared to continue to fire more rockets, rockets that would reach the port of Ashdod and Dimona, Israel’s nuclear reactor. On May 7, IJ deliberately fired a rocket to derail efforts by Hamas to maintain the ceasefire agreement, but it missed its target and fell into the Mediterranean.

IJ is said to have more of the 10,000 rockets in Gaza than does Hamas. IJ has 6,000 fighters and 12,000 activists.  Friction between IJ and Hamas is common. IJ is also closer than is Hamas to Iran to which Ziad Nakhalah, IJ leader since September 2018, is a frequent visitor. Nakhalah, who lives in Damascus and Lebanon, claims that just before the last round of fighting on May 6, IJ was prepared to launch rockets towards Tel Aviv, and has promised weekly protests along the border between Gaza and Israel will continue.

Palestinian Islamic Jihad, an offshoot of the Muslim Brotherhood, was formed in 1981, with the key objectives, to eliminate the State of Israel, and to establish an Islamic Palestinian state with its borders, the pre-1948 Mandatory Palestine under the British Mandate. Its active force is the Al-Quds Brigade, said to be 8,000 strong, active in the West Bank (Hebron and Jenin) as well as in Gaza. It masterminded several bombings and suicide bombings. Its first major strike in Israel on July 6, 1989 was an attack on the Egged bus 405, travelling the Jerusalem-Tel Aviv highway, which killed 16, and injured 27.

It has continued with attacks on Jewish settlements, car bombs, suicide bombings, and stoning to death of two 14 year old Israeli boys abducted from a West Bank settlement in May 2001.

Yet, it is possible and more likely the attacks were launched because they were close to Israel Independence Day, and to Israel as host to Eurovision song contest, May 14-18, with 41 countries slated to compete, which is expected to attract thousands of visitors to Tel Aviv, as well as a large TV audience. Israel has hosted Eurovision twice before, in 1979 and 1999 but no major boycott was attempted then. Since the launching of the BDS campaign by Palestinians in 2005, urging individuals, corporations, and governments to divest from Israel to boycott Israeli business, academic, and cultural events, the attitude has changed and boycott is urged.

On the day before the cease-fire, Israel uncovered a Palestinian led movement, a network of bots and fake twitter accounts calling for boycott of Eurovision. Twitter has stated it had suspended a small group of accounts, presumably anti-Israeli, for violating its rules.

The usual suspects, including Mike Leigh, Ken Loach, and Roger Waters, responded to the decision that Israel would be the host of 2019 Eurovision. In a letter to The Guardian on September 7, 2018, these self-appointed righteous pillars of morality called for boycott of the event: they believed “there should be no business with the state that is denying Palestinians their basic rights.,” referring to freedom, justice, equal rights. They were answered in a similar letter to The Guardian of April 29, 2019 by a number of celebrities including Stephen Fry, Sharon Osborne, Marina Abramovic, and Scooter Braun: “We believe the critical boycott movement is an affront to both Palestinians and Israelis who are seeking to advance peace through compromise, exchange, and mutual recognition. While we all may have differing opinions on the Israeli-Palestinian conflict and the best path to peace, we all agree that a cultural boycott is not the answer.”

Neither is the launching of 700 missiles the answer.