From the Mail on Sunday

A shadowy Islamic State fundraising cell seeking to free Western jihadi brides from Kurdish refugee camps in Syria has been exposed by The Mail on Sunday. Undercover reporters spent weeks communicating with a ‘fixer’ in Turkey before catching a ‘courier’ on camera in London last Friday picking up what he thought was a £4,500 donation to the terror group’s cause.

In fact, the brown envelope left at the ‘dead drop’ contained only a crossword puzzle book.

As the Metropolitan Police began an investigation, this newspaper can reveal the sophisticated network apparently created to fund the escape of jihadi brides from camps in Syria. The camps include Al-Hol where Shamima Begum, who fled Britain aged 15 to join ISIS five years ago, was held.

there is mounting concern about the resurgence of ISIS influence in the camps where an estimated 13,500 foreign women and children linked to the terror group are held.

According to a report last week, an Instagram group called Caged Pearls – believed to be run by British women detained in Al-Hol who are raising money to fund their escape from the camps – is advertising itself with a poster reading: ‘Al-Hol – The cradle of the new Caliphate.’

It was at the sprawling Al-Hol camp where the MoS first learned in September that ISIS supporters were raising money in the UK to help jihadi brides bribe their way to freedom, either to return to their homelands or rejoin the remnants of the terror group scattered across the Middle East. 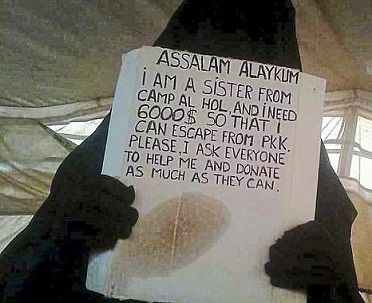 One such fundraiser was named as ‘Sumaya Holmes’, who had been smuggled out of the camp and travelled to Turkey. Holmes is said to be the widow of a British convert who died fighting for ISIS in Syria and the wife of a Bosnian jihadi now serving a prison sentence in his home country.  On her Facebook page, Holmes openly touts for donations, posting photographs of women in burkas holding up placards pleading for help to escape.

‘Assalam Alaykum [May peace be upon you all] I am a sister from camp Al-Hol and I need $6,000 [£4,500] so that I can escape from PKK [Kurds]. Please, I ask everyone to help me and donate as much as they can,’ reads one sign. Below it, Holmes has written: ‘This is my friend and she is in need of help. She sent me this photo yesterday…Please, even if you can’t help, pass it to those who can donate to her. Jazakallah Khayr [May God reward you].’

Posing as a South London drug dealer who had converted to Islam, a reporter contacted Holmes on Facebook to ask what support he could offer. Holmes immediately asked to communicate on Telegram, an encrypted messaging app used by extremists and criminals due to its high levels of security. Holmes initially asked for a donation using the cryptocurrency Bitcoin. When our reporter declined, she suggested making a deposit in an associate’s bank account in Jordan and then hawala, a method of transferring money that leaves no paper trail. She sent the address and mobile phone number of a fundraiser based in Britain who she said ran a money exchange that could provide such a service. Again, the undercover journalist refused.

Holmes then provided details of a man called ‘Anas’ in London who could collect the cash in person. When an offer to donate £4,500 was made, Holmes wrote: ‘Ok akhi [my brother] this amount of money you want to contribute to free 1 sister or its for the sisters in camps?’ The reporter replied, ‘Free one sister,’ and received the response: ‘OK i will see to one sister insha Allah [God willing].’

Holmes had meanwhile been busy spouting her support for ISIS on her Facebook page. In one post, she described Abdullakh Anzorov, the Chechen who last month beheaded teacher Samuel Paty near Paris, as a ‘hero’, adding: ‘There are no words that can describe my feelings towards him and what he did for our Prophet, peace be upon him. Little Mujahid [jihad warrior], you’re an example to many Inshaallah [God willing] #chechanhero.’

Back in London, a second undercover reporter arranged on WhatsApp to meet Anas in a residential street in Acton, West London. ‘Akh [brother], how shall I bring the cash? In an envelope or what?’ the journalist asked when a time on Friday had been agreed. ‘An envelope, please anytime, but tell me a quarter of an hour before you arrive, please,’ replied Anas.

In the event, the reporter changed the plan – citing concerns that the police might be watching – and left an A4 brown envelope under gas cylinders at a nearby service station. As it is illegal to hand over money to a suspected terrorist, the envelope contained only a crossword puzzle book.  (Traditionally it was newspaper cut into fiver sized rectangles, but a paperbacked book is more innocuous)

Within moments, as an MoS team looked on, a bearded man wearing a white crash helmet arrived on a silver scooter. He knelt down, dragged out the envelope and smiled before messaging the reporter: ‘File received, let me check the money and tell you.’ The man was soon back in touch. ‘There are [sic] no money in the envelope, there is only a book. ??? … It seems that you are not serious about your subject.’ 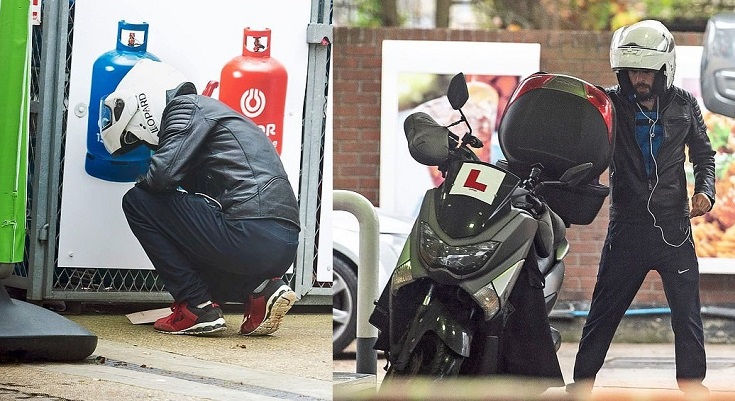 We immediately informed Scotland Yard.  Last night, a spokesman said the information was being assessed by counter-terrorism detectives.

In a series of messages on Facebook Messenger, Holmes denied involvement. ‘That’s not true, you’re bulls****ing,’ she wrote. ‘Good luck with publishing your lies.’

Anas denied involvement. ‘No, no, I don’t take anything, you are wrong,’ he said before hanging up. He did not answer further calls.

PrevChutzpah: Palestinians Prepare List of Demands For Biden Administration
Something for the first Sunday in AdventNext