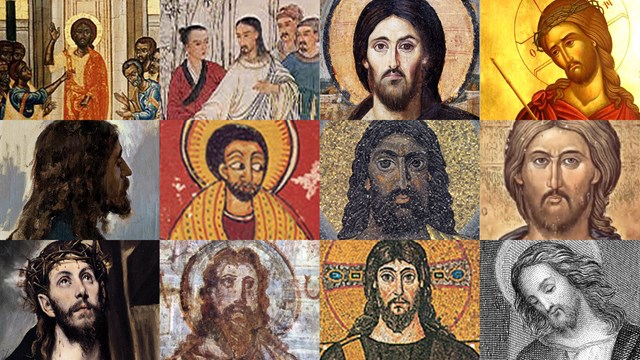 It is of little consequence if Hillary-Hilaria Baldwin identifies as American or Spanish, or if white women like Jessica Krug or Rachel Dolezal consider themselves or are regarded by others as white or black. However, it is very important historically and politically to make clear that the identity of Jesus has been falsified by those who in a fabricated and dishonest narrative argue that the claim of the Jewish people to the land of Israel is invalid. The politically motivated Palestinian falsification is that Jesus, the Jew, is misidentified as a “first century Palestinian,” although Palestine did not exist at the time nor was the term Palestinian used as an attribute of identity. The implication is that if Jesus was Palestinian, Jews in Israel are on Palestinian land, and the State of Israel should be erased..

The Fake News concerning Jesus has theological, historical, and political ramifications. The falsification, whether propounded by those holding theological positions or by politically interested advocates is theologically reminiscent of two anti-Jewish doctrines: replacement theology and liberation theology. The first is essentially the doctrine that the Church  has superseded Israel, replacing Jews as God’s chosen people and the Jewish God of the Hebrew Bible. It has led to incessant anti-Jewish attacks throughout history. Liberation theory, born of Latin American Marxist militancy, insinuates that Jesus was, really or symbolically, a revolutionary, an anti-colonialist.

The falsification that Jesus was a Palestinian is a travesty of history. Whether one accepts Jesus as divine or human, conceived by the Holy Spirit and born of the virgin Mary, the incarnation of God the sun or the human born to Mary and Joseph, sometime between 6-4 B.C., the reality is that he was born in the area known as Judea. There are scholarly differences over his birth. The starting problem is that there are contradictions or gaps in the four Gospels, written by fallible individuals about exact birthplace of Jesus. The Gospel of Mark for example does not mention the birthplace but refers to Jesus from Nazareth of Galilee. However, the wise men from the East were inspired by the Star of Bethlehem to travel to Jerusalem and then to Bethlehem to see the new-born child. The consequent festival of the birth is Christmas Day, December 25.

The reality is that the area of Bethlehem and Jerusalem were in a territory called Judea, and Nazareth was in Galilee. There was no first century Palestine.

The consensus is that Jesus was a Jew born in Bethlehem, who grew up in Nazareth, which was his childhood home, in Galilee, in the north, an area whose mother tongue was Aramaic with Hebrew as a relative, an area in which Jesus found his first disciples. What is important is that the word “Palestine” does not appear in either the Old or the New Testament. Nevertheless, the Fake News of its existence two thousand years ago has become part of the pro-Palestinian anti-Israel rhetoric disseminated by hostile commentators. All of the area in which Jesus lived was ruled by Rome’s client King of Judea, Herod the Great who ruled 37-4 B.C.  The area was important to the Roman regime which controlled the area not so much in itself, but because it existed between Syria and Egypt, important for Rome.

The name “Palestine” appears to  have been first used by Herodotus in 5th century B.C. referring to a district of Syria, the area between Phoenicia and Egypt. It reappeared in 135 A.D. after the Roman legions crushed the Bar Kokhba revolt against the Roman Empire. The Romans set up a province and named it Syria Palaestina to sever the connection of Jews to their homeland. They removed the Jewish name, Judea, and replaced it with a version of the name “Philistine,” referring to a long extinct people. Jerusalem was renamed Aelia Capitolina, and forbidden to Jews.

Fours factors are significant. One is the question of whether the Palestinians are an invented people. Arabs living in the disputed area of what is now called Palestine were not a separate entity but a part of the general Arab people in the area. Those Arabs were akin to Syrians in religion, ethnicity, language and culture. In February 1919 the Congress of Muslim-Christian Associations meeting in Jerusalem declared it considered Palestine as part of Arab Syria as it had never been separated from it at any stage: “We are connected with it by national, religious, linguistic, moral, economic, and geographical bonds.” Similarly, the UNSCOP report of September 3, 1947 which endorsed the partition of Palestine remarked that Palestinian nationalism was a relatively new phenomenon, and that Palestinian identity was only part of a rich tapestry of identities. The State of Israel was created in 1948 out of the ashes of the Ottoman Empire, not out of a non-existent Palestinian state.

Secondly, throughout the ages the disputed area was ruled by different regimes, Turkish, Kurdish, Circassian, until the Ottoman Empire took control in the 16th century. But the crucial fact was that there was never an independent Palestinian political state. Nor was there a distinct administrative or cultural unit called Palestine, nor a distinct Palestinian people. Consequently, logically there was no Palestinian Jesus.

A third factor is that despite the Romans, a Jewish identity remained in the area, with religious, communal, cultural norms, an example of the mystic chords of memory, touched by the better angels of their nature.

The fourth factor, relevant in today’s politics is that the first official international naming of Palestine came in the Mandate of Palestine accorded to Britain by the League of Nations in 1922 and which lasted until the creation of Israel in 1948.

It is useful to observe some of the main figures responsible for the fake news on Jesus. Some are Palestinian propagandists, all of whom are eager to erase Jewish ties to the Holy Land. The fabrication goes back to a press conference of Yasser Arafat in June 1970, and then to his remarks at the UN in 1983. Jesus as described as the first Palestinian fedayeen who carried his sword. His successor Mahmoud Abbas, president of the PA, spoke of Jesus as a Palestinian messenger of love, justice, peace.

Hanan Ashrawi, a Palestinian Christian, long time official spokesperson of the PLO, in an interview on February 2, 2001, remarked that Jesus was Palestinian, and this assertion became part of the anti-Israeli rhetoric of the PLO. The prime minister of the Palestine Authority, Dr. Muhammad Shtayyeh, at a Christmas dinner 2020, called Jesus “the first Palestinian self-sacrificing fighter,” from whom Palestinians learned martyrdom-death, and who paid for his mission with his life. In what may be considered a desecration of Christianity, Shtayyeh linked Jesus to the Palestinian “martyrs,” the name for suicide bombers and terrorists who attacked Israel.

None of the American or British champions of the Fake News are deep theological or historical scholars, and most have a recognized anti-Israel agenda. In an interview on the BBC in 2020 the theologian Rev. Robert Beckford, born in Northampton of Jamaican parents, described on the BBC program as one of the UK’s most prominent black theologians, said that the color of Jesus matters, and that Jesus was not a white skinned blonde haired European as traditional artistic depictions show but a person of color, dark skinned. Beckford, who has Malcolm X as a hero and thinks the Church of England is racist, proclaims he wants to fight battles on behalf of the black community.

Some of those in the U.S. who used the Fake News may be mentioned: Rev. Jeremiah Wright of Chicago, for some years the pastor of Barack Obama, called the State of Israel illegal and genocidal and an apartheid state, and in 2015 compared Native Americans with Palestinians and asserted that Jesus was Palestinian. He wanted people to remember that Europeans came and took the Palestinian’s country. Interestingly, he asserted that Palestinians say, “Palestinian lives matter.” Rick Wiles, pastor in Florida, political commentator, and founder of TruNews, blamed Judaism for the spread of coronavirus.

The usual suspects have embraced the Fake News. Linda Sarsour, Muslim activist of Palestinian descent declared that Jesus was a “Palestinian of Nazareth” and is described in the Koran as being brown copper skinned with wooly hair. Bewilderingly, Sarsour also said that Jesus was born in Bethlehem which is currently under the jurisdiction of the Palestine Authority, She concluded that the birthplace of Jesus is under Israeli occupation.

If the historical and geographical truth is insufficient for the prophets of Fake News, perhaps they should be reminded that above the head of Jesus is the sign INRI, Jesus of Nazareth, King of the Jews.