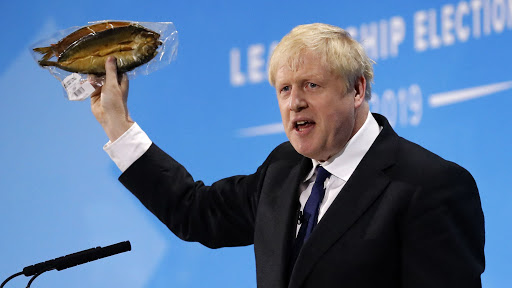 Fish is not the sole contentious issue in the bellicose Brexit trade talks between the UK and the European Union, but it is not a red herring. The issue preventing agreement in the talks is a mixed grill of disputes over factors such as fishing rights, control of a disputed aquatic zone, political concerns for coastal areas, and legal sovereignty.  At first ,it seems insignificant because the economic and industrial factors are rather small compared with the total amount of the respective economies, but the fishy business touches on national emotions. Though an English person may be willing to forego the historic quintessential breakfast meal of kippers, the species is symbolic as Prime Minister Boris Johnson showed when he waved a pair of kippers at the first official event of the Conservative party after he became prime minister. And what is more British than fish and chips, the hot dish of fried fish in butter with fried potatoes, eaten with greasy fingers or as late-night supper, even though its concept and ingredients originally came from Sephardic Jews, immigrants from Northern Europe.

The fate of the UK-EU negotiations, going at a snail’s pace for years, remains uncertain even after years of talks over Brexit. On October 16, 2020 Boris Johnson declared that the European Union had refused to agree to a free trade deal with the UK, and therefore his country was prepared to leave the EU at the end of the transition period on December 31, 2020, with no trade deal. Britain would conduct future trade talks with the EU on the basis of international WTO terms. However, the UK formally left the EU on January 31, 2020, but is bound by EU rules until the end of 2020.

There are a multitude of issues to be solved over Brexit, but presently most divisive are two main items. One is the settling of level playing field conditions for economic issues, environment,  labor and workers’ rights, taxation,  state aid ,financial assistance given by government to business, to ensure common rules  and standards  for fair and open competition, that do not allow  business in one country to have a competitive  unfair advantage over business in other countries.

The second issue is fishing rights and factors related to it: control of the aquatic zone, competition of rival fleets, decline of coastal towns once prosperous from the fishing business, exercise of sovereignty and freedom of national action in deciding fishing rights and quotas.

There are two relevant international understandings. The first is that under present international arrangements formulated by the UN in 1982 each country has a 12 nautical mile territorial sea  zone, and an Exclusive Economic Zone,  EEZ,   which can extend  up to 200 nautical miles from the coastline , in which a sovereign state  has preeminent, special fishing rights  and marine resources  over that area. In the EU, country zones, including that of UK until Brexit is implemented, are merged into one joint EU zone, open to fishermen from all member states. The EU has access to UK waters, its 200 mile zone, apart from the  first 12 miles from the British coast, and has a quota on what its fleets could catch. In fact, that quota has been more than half of the catch in British waters. The catch is worth 750 million euros. About 60%, even 80% in Cornwall, of the tonnage landed from British waters is caught by foreign boats. After Brexit, the UK will have sole control of its EEZ, and the right to decide which countries can fish there, and how much fish they can catch.

The second international understanding is the Common Fisheries Policy, CFP, the system created  to maintain fish  stock and fishing practices  that do not harm the ability of fish populations to reproduce. By this policy, the EU sets quotas by which member states can catch specific percentages and volumes of each species of fish in the EEZ.  After Brexit, the UK wants to end this system, to set its own quotas after negotiations, and control who can fish in its waters. The UK argues that the CFP has cost British fishing jobs, and that British fishing rights were traded away in 1973 when the UK joined the EEC, European Economic Community.

As a result, the UK wants to end the present system and make foreign access to its waters and quotas on species of fish in its EEZ result from annual talks. In contrast the EU wants to maintain the existing arrangement, and that to avoid economic dislocation, not to have negotiations every year. On this point, French President Emmanuel Macron, perhaps speaking in a posture of French grandeur, has been adamant, arguing that annual negotiations will make it impossible for the industry to make investment decisions and that French fishermen will not be sacrificed for Brexit.

The intensity of the differences  between the UK and EU is surprising because the economics involved and the number of people employed would not seem to make fish so important as to block trade agreements.  Fishing is a small part of the economies in Britain and France.

The British fishing fleet consists of 6,000 vessels with 12,000 fishermen, and 24,000 altogether in fishing and fish processing industries, about 0.1% of the 33 million work force in pre Covid-19 days. Fishing in British waters  which are rich in herring, mackerel, sole, and shellfish, especially langoustine, in 2018, was worth 784 million pounds, 0,12% of GDP, compared with 132 trillion pounds in financial services. The EU accounts for 43 % of UK exports, and 51% of UK imports.

Naturally there are many complications in any assessment of the fishing issue. Six factors can be mentioned here. One, troublesome because of its discussion of independence, and its concern to retain access to EU markets, is that Scotland accounts for 64% of all UK fish landings while England accounts for 28%, and this may affect negotiations.

Another is that there are competing fishing interests; deep sea against inshore; industrial and family scale boats; fishers against processors. A third factor is that a considerable part of the British quota has been carried out by boats of EU countries.  More than 60% of tonnage landed in Britain is caught by foreign boats. In addition, the majority of fish, 70%, eaten in UK is imported, especially cod (83%) and haddock (58%), while it exports 80% of what is caught.

The issue of the fishing industry has both national and international pertinence. Fishing has been declining in the UK, partly because of declining stocks, and partly because of the quota imposed on the amount of the catch to be brought ashore.  It is a poignant memory of the past that Grimsby once was the largest fishing port in the world. For both UK and France fishing has symbolic overtones, symbols of sovereignty, useful in the high stakes game of political brinkmanship.  President Macron proclaims that fishing is an essential economic interest for France and that it must be defended.  French fishermen, he said, should not be sacrificed for Brexit.

The international problem is that a considerable part of the world’s predatory fish has disappeared, the result of a number of factors; the growing world demand for seafood; the increase in the  global fleet of efficient boats;  the rapid increase in the armada  of Chinese industrial fishing boats which catch  the largest amount of fish, and account for about half of the world’s fishing activity; and the reality that the amount of tonnage caught  has been much less because the average size  of the fish caught   is much smaller than in the past, possibly due to the fact it is the mainly the smaller fish that escape the nets.

Foreign companies at present own the rights to catch more than 130,000 tons of fish a year, that are part   of UK’s fishing quota, about 160 million pounds of the English quota. Vessels from these companies, in Iceland, Spain, and Netherlands account for 55% of the British quota’s annual value. Not surprisingly Boris Johnson is entering the trade battle with the slogan, British fishing grounds are first and foremost for British boats.