The Football Lads, as the DFLA (Democratic Football Lads Alliance) marched in Birmingham today, where they joined forces with the Justice 4 the 21 campaign. Young or non UK readers may not remember the IRA campaign of bombing on the UK mainland in 1974. They set off a bomb in the Tavern in the Town and Mulberry Tree pub in Birmingham and 21 people were killed. 6 men were convicted, but later released on appeal (although not before they had served a good 17 years imprisonment) but the authorities have never pursued anybody else for the murders. The thinking seems to be that this might upset the ‘peace process’ – senior men of the IRA like Gerry Adams who know things, and would have had a hand in giving the orders if they didn’t make and plant the bombs, have a veneer of respectability men now and are friends of Jeremy Corbyn.  The families of the victims want justice for their lost relatives.

The DFLA stand against all forms of extremism and today their focus was on the grooming gangs; Telford is in everyone’s mind, and more convictions in Oxford were reported only today. The original FLA also marched – their speakers were Tommy Robinson and Anne Marie Waters. 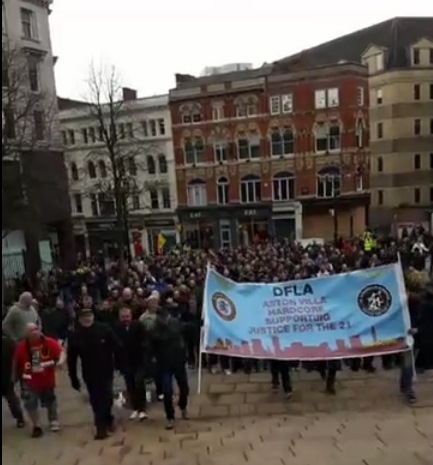 I didn’t go but many of my friends did, and one in particular took photographs and video of the DFLA march and rally. I can’t get the video onto You Tube for technical reasons, but there are some stills from them.

The march entered the Square in front of the Town Hall singing Justice for the 21.

The first speaker began by saying that today is to show the government and the establishment that we mean business. He thanked the Blues, Villa and Albion (the three big Football league teams in Birmingham, Birmingham City, Aston Villa and West Bromwich Albion) and admins from up and down the country. From the south coast and London to Newcastle in the far north east.

our wives and girlfriends – this will all be worth it’ He continued, That you are all standing here, and withour incident, is testament to all the hard work that has been put in. For too many years we have been talked about as working class football thugs. We do stick to our teams, we are a bit tribal, but that is part of being an island race. But Blues, and Villa and Albion have worked together and have become friends. 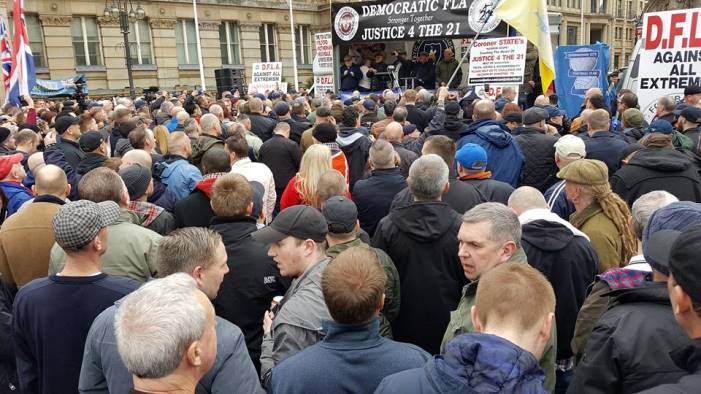 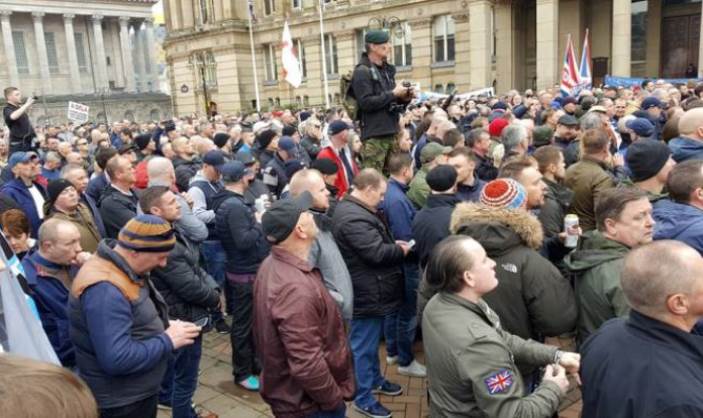 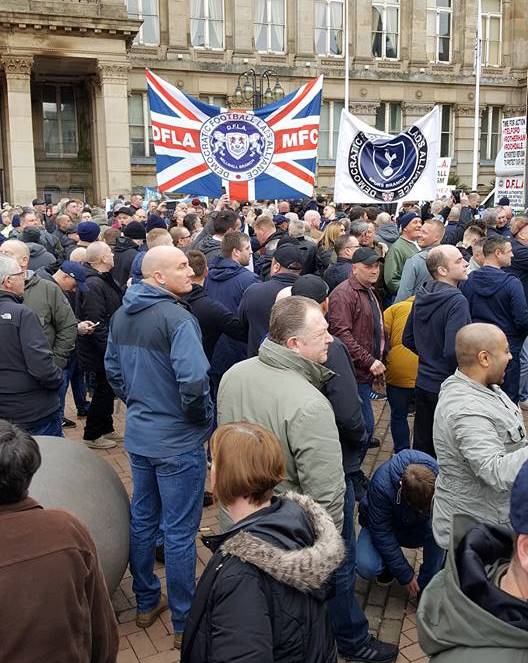 I won’t precis all the speeches.

UKIP MEP Bill Etheridge. He said: “I will stand by you. We will fight for the Justice4the21, fight for the Victims of Telford, Rotherham and Rochdale. We won’t give in until justice is done.”

UKIP MEP Gerrard Batten said: “What cause could be more deserving of legal aid than the Birmingham pub bombings. They need and deserve justice.” 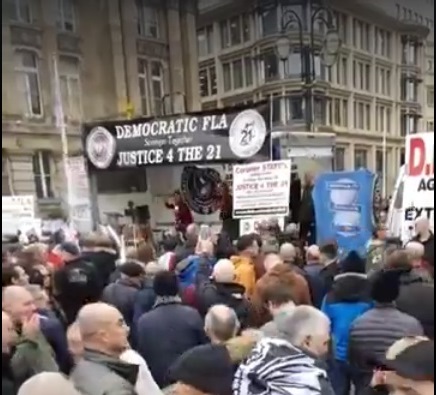 But the last speech was by a lady from Justice 4 the 21 who thanked the police, a local councilor and everybody else for their help today and in the past. One of the groups who support Justice 4 the 21 are Ghurkahs and their families and two young Nepalese girls performed a traditional dance as a finale.

The march then walked to St Phillip’s Cathedral where they laid their wreaths in honour of those who died in 1974 as a result of IRA terrorism. You can see the teams and the distance people had traveled today. PNE is Preston North End in Lancashire, a very old club. Millwall, Arsenal and Watford are London clubs, Coventry and Leicester from the Midlands, Middlesborough the North east. 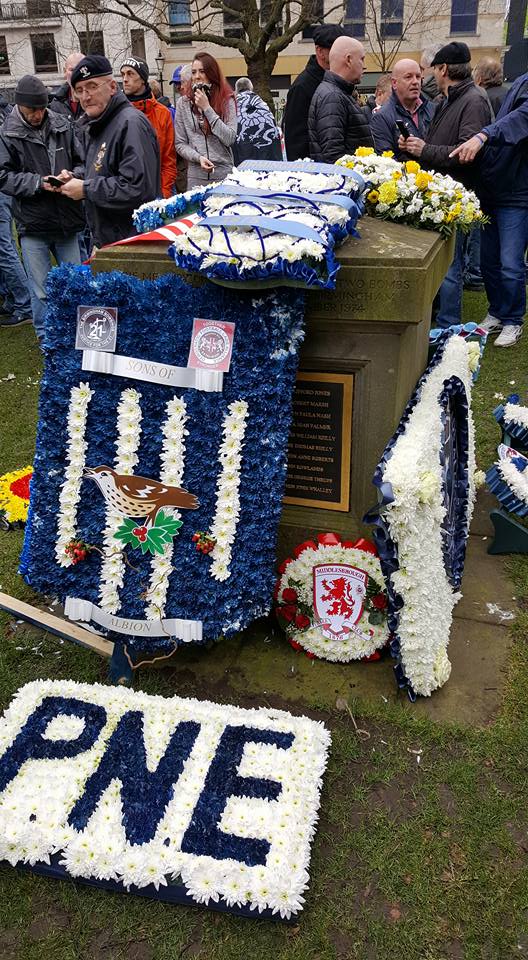 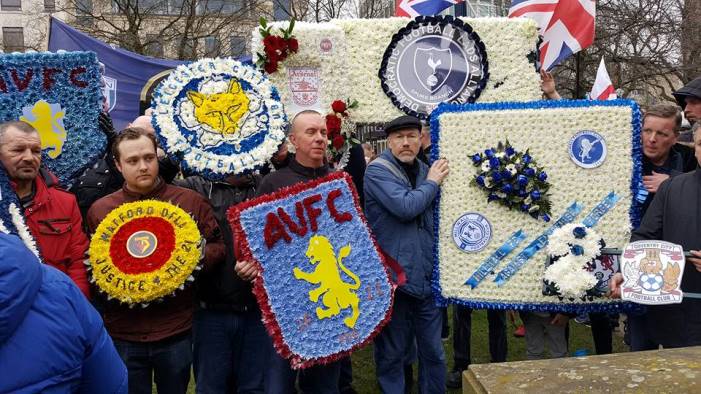 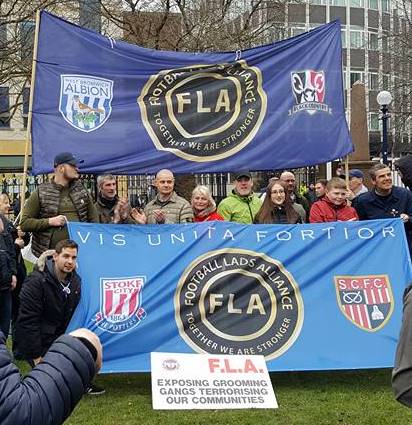 The Birmingham Mail had enough reporters to cover the FLA march and rally, and the left-wing Stand Up to Racism counter protest here.