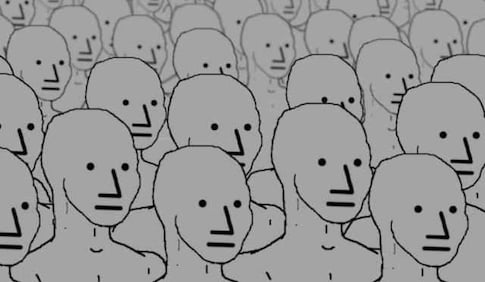 Most conservatives and libertarians, as a rule, do not take the time to analyze their opponents’ tactics, with the result that they get outmaneuvered again and again and again.

One of the characteristics of leftists in Western Europe and North America is chanting political slogans when in groups. This is a superb tactic which non-leftists have inexplicably failed to analyze. Or adopt.

Chanting political slogans is a multipurpose weapon. First, it serves as group cohesion. When one is parroting slogans, one is part of the collective. Belonging to a group—any group—has tremendous allure, especially to socially inept neurotics. There is group solidarity. Remember that humans are herd animals.

Secondly, chanting loudly also gives the illusion that their numbers are much higher than is actually the case. This is important because leftists like to promote themselves as being (all the) students, or (all) minorities . . . or The People.

Thirdly, it can be used to effectively disrupt or prevent a speaker from delivering a speech or lecture. Even if the speaker resorts to shouting, his words are garbled. Thus, the listeners are unable to hear the speaker, much less concentrate, and the speaker cannot communicate with the audience, so the connection is broken. And just as the speaker cannot deliver his/her message, the leftists, by chanting, can deliver their repetitious message. Chanting is, therefore, an acoustic Berlin Wall. This is the same principle behind the censorship in universities where leftists hold power; student clubs which hold different positions are harassed, defunded and assaulted. Outside speakers who will express anathema facts and viewpoints, are also harassed, defunded, assaulted and chanted out. Incidentally, this isolation against contrary information is central to all cults.

In Animal Farm, the fable that satirizes the Bolshevik revolution and its Stalinist aftermath, the sheep start chanting the slogan “Four legs good, two legs bad” in every meeting, usually at the end. Just as important, they also chant the slogan anytime that any of the other animals begins to voice suspicion of the ruling class, or doubts about the rulers’ claims, effectively preventing discussions.

Mind you that it is almost always the case that the audience outnumbers the disruptors four to one, or even twenty to one, so they could easily be ejected or their anatomy rearranged. Yet, nowadays, American men seem to have become emasculated cattle (“fighting is wrong,” “take the high road,” “violence doesn’t solve anything”), so the vocal minority are always successful in censorship. This prevalent philosophy implies that it is better to be a victim than to fight back. It is more “noble.” It also explains why leftists get away with so much. Several times during the 2016 election, for example, Trump’s rallies were cancelled because a dozen aggressive “activists” started their chanting in the venue and the hundreds of attendees had to go home.

Fourthly, and just as importantly, chanting is an antidote to a chanter’s independent thinking. If a protester cannot hear a speaker present facts and arguments that could disrupt his rigid worldview because of all the chanting, he cannot have doubts, he cannot think through the proposed conundrum, the fanatic cannot engage in individual thinking. But when some of the fanatics are isolated and probed on their dogma, the idiocy that underlies their worldview may become patently obvious. Oftentimes, what can be seen in YouTube during leftist demonstrations is that a non-leftist will try to interact with them and ask a question, with the desire of engaging in debate. Many of the leftists are terrified (this is not an exaggeration) of debating and will turn away, or walk away, or more often start their chanting. It is just possible that they realize, subconsciously, just how shallow are their fanatical beliefs. The chanting hides the fact that their premises, their reasoning, are sheer idiocy. They will remain NPCs.

Lastly, chanting serves to intimidate. By chanting loudly and snarling, the loudness gives the impression of strength, of power. It intimidates. Anyone who has studied leftists’ outrage throughout society in the past five years knows by now that their most frequent weapon is not physical assaults, but intimidation—through screaming, insults, social media, (empty) threats, mobbing, and chanting. However, once a person realizes that intimidation is their primary weapon, it is so much easier to stand up against them. And even laugh at them—and how they hate being laughed at!

All of these effects occur simultaneously. Furthermore, no matter how odious is the content of the chanting, leftists always manage to make it sound catchy, so you find yourself mentally parroting their words as your brain shuts down (it has happened to me). And they are so prolific in creating slogans! Thomas Sowell aptly refers to leftists as “masters of verbal virtuosity.”

Hand in hand with shouting is screaming, that is, if they are not chanting then they are screaming, and please notice that every time that a leftist thinks to debate a conservative or libertarian, he/she resorts to screaming. Or, as I said, they run away, or, engage in repeating slogans over and over, no matter how irrelevant or inappropriate. In fact, they rarely deliver their message in a calm manner anywhere; it is usually hysterical screaming. Again, there is a plethora of instances that the reader can examine.

The end result is that a small group of loud, self-righteous, aggressive fanatics can nullify the rights of a timid majority. So what is the antidote to their chanting during a lecture, or speech? I am sorry but I cannot state it outright because some readers may object to any type of effective physical self-defense as being icky-poo.

Armando Simón is a retired psychologist and author of When Evolution Stops, Very Peculiar Stories and The U.