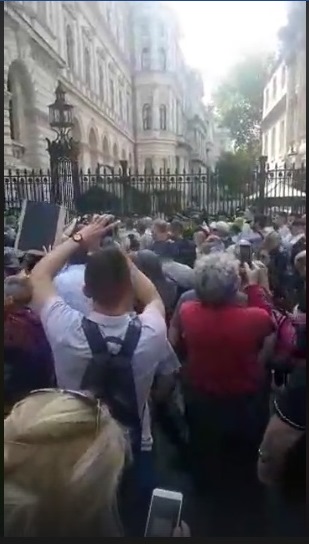 I am unable to attend todays demo in London to support Tommy Robinson. However through the live feed and reliable friends who are in attendance  I can report that a large and vocal crowd has assembled in Whitehall outside No 10 Downing Street. I’m told that the police seem to be at  a loss as to what to do…..

The protesters are now making the protest a sit-in across Whitehall, so as to block the road and stop the buses.

I’ll update as the afternoon progresses. 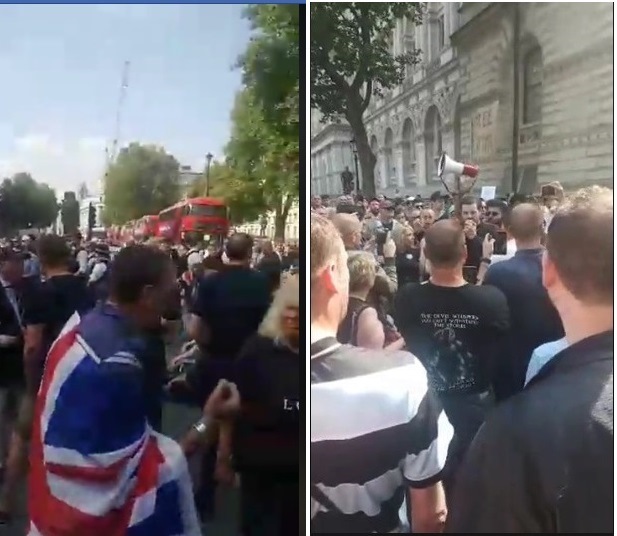 Above left – red London buses, stacked along Whitehall, going nowhere and abandoned by their passengers.

Now speeches above right. Are the BBC here? Come forward BBC, we’d like a chat.

The crowd is responding with wanting not just freedom for Tommy, but justice for the raped girls, and more robust action from the authorities.

The police have decided what to do. Move in a large group to push protestors away from the gates and threaten with arrest anybody sitting down refusing to move. There is anticipation of mass arrests 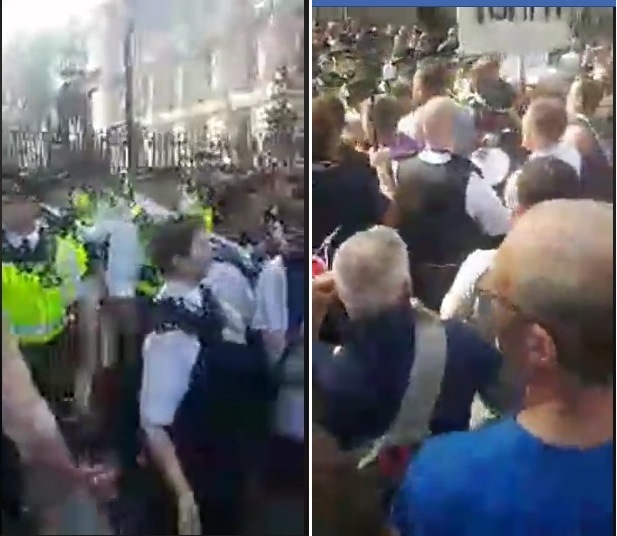 The police are now trying to clear the road so traffic can resume. They are not having much luck! The crowd became agitated at being moved and the organisors formed a line in front of the police as if they were protecting the (not very) thin blue and yellow line. There was a scuffle.

The live feed has either ended or my computer has given up but I have received a telephone call from a friend who was there, and had just left.

He said that when he arrived about 400 people were gathered listening to a speech, and Gerard Batten of UKIP was waiting to speak next.

He witnessed something he has never seen before; that the gates across Downing Street were rattled by protestors, and two people climbed up them, but were persuaded down before they reached the top and before anything untoward happened.

He looked up and another 400-500 men and women were marching from the direction of Parliament Square. They joined the throng and the nucleus of the demo was formed, in numbers sufficient to close Whitehall. More arrived as the afternoon wore on.

His impression of the crowd was similar to my own observed through the live feed. Many respectable looking middle-aged couples and women among the more obvious Football Lads. The police officers deployed among the crowd were of the ‘Community Police Officer’ type, who were being friendly and conciliatory. However it was known that ‘the heavy mob’ were sitting just round the corner and could be deployed at a moments notice. This, it was hoped, could be avoided, with co-operation.

I have tidied the pictues and text up since the live feed went off; I hope to have better quality photographs later this evening.