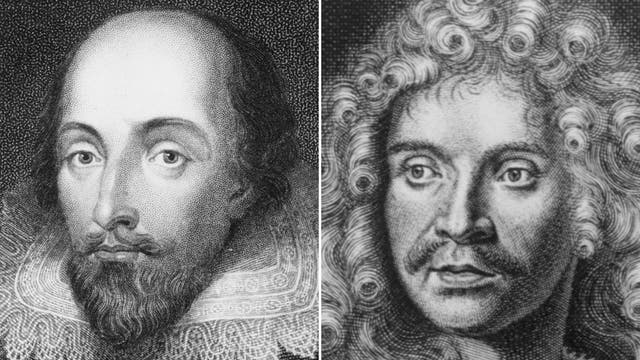 Shall I compare thee to a summer’s day? Comparisons may be “odorous” but they can be captivating distractions on Covid evenings. Who can claim the title of best tennis player, Roger Federer or Rafael Nadal, best boxer, Joe Louis or Muhammad Ali, best baseball player, Babe Ruth or Willie Mays, best basketball player, Michael Jordan or Wilt Chamberlain, best film., Citizen Kane or Vertigo or La Regle du Jeu? And who is the greater playwright, William Shakespeare, 1564-1616, or Moliere, 1622-1673? That is the Question.

Vive le difference between British and French culture in two of the greatest playwrights in history.  Britain has a rich literary heritage but Shakespeare, the “Bard” is widely recognized as the greatest writer in the English language. In France a number of writers, Voltaire, Hugo, Proust, Flaubert, can compete for that title, but Moliere is viewed as the most acclaimed writer of French comedy and satires, even more heralded than later satirists like Voltaire and Anatole France.

This year, specifically January 15, 1622, is the 400th anniversary of the birth in the heart of Paris of Jean-Baptiste Poquelin, son of wealthy carpet  dealers, who became Moliere. He is being honored by new statues, a postage stamp, costume exhibition, and new staging of his plays, starting with the controversial originally banned version in 1664 of Tartuffe.

Shakespeare and Moliere were both acters, both ran a theater company, both had royal patronage, both were prolific writers. Shakespeare is credited with and 154 sonnets, Molière with 31 plays.  Both observe and comment on human folly, though Molière more often satirizes authority, the Church and the aristocracy. Shakespeare deals with a more complete range of emotions and human conflicts, murder, power, egotism, including issues such as heterosexuality, sexual ambiguity and cross dressing, histories, and romances with happy endings. Both produced memorable, vivid characters: Shakespeare’s Hamlet and Macbeth are universally known.  Moliere has given us Tartuffe, the hypocrite, Harpagnon, greedy and mean, and Argan, the hypochondriac. Very little is directly known about Shakespeare’ life apart from court records, land titles, and some contemporary opinions of others, and no original manuscripts survive,  and this is also true of Moliere.

Both playwrights are satirists, but they differ. Moliere is concerned mostly with contemporary society, while Shakespeare also refers to ancient history and literature, the Carthage Queen, to astrology and magic. Shakespeare may not have been a proto-feminist but in some plays he portrays the complicated inner lives and sexual desires of  women  Rosalind, Queen Titania, Katherine, Lady Macbeth, Beatrice in Much Ado about Nothing,  and in other plays  equal relations between men and women.

Moliere was more sharp in ridiculing members of the French court, and general   customs, fashionable absurdities, affected speech, fake sentimentality, intrigues, nobles, doctors, priests,  as well as religious bigotry.  Shakespeare  engaged in more in more imagery than did Molière, but  both were critics  of powerholders. Molière, who regarded nothing as sacred, is equally if nor more biting on hypocrisy and cant in plays with philosophical,  religious, and moral implications.

The plays are not easy to perform. Shakespeare‘s plays are written partly in prose, but largely in iambic pentameter with its rhythms of stressed and unstressed syllables. Moliere is difficult to translate into English because his style of alexandrines and  rhyming couplets.

Both men are honored in their countries. Shakespeare has countless memorials, and is remembered by the reconstruction of the Globe Theater in Southwark, London, on the site of the original  theater built in 1599 by Shakespeare’s  playing company, the  Lord Chamberlain’s men. Moliere is remembered by the theatrical award,  the Molière, given to the most gifted French actor and  equivalent to the Tony in U.S. and the Olivier in UK,  and by the “house of Molière,” the Comedie Francaise, in central  Paris, which has the oldest active theater company in the world, established in 1680 in his honor after his death. Moliere’s plays are performed there more often than those of any other French  playwrights today.

Who was he? Before becoming  Molière, he studied as a lawyer for a very short  time, never qualified, and in 1643   became an actor  and founded a  theatrical  troupe. It became bankrupt with outstanding debts. The actor was imprisoned for one day and fled Paris. He travelled for 13 years  with another troupe, and adopted the pseudonym “Moliere,”  becoming actor, director, and playwright,. He returned to Paris in 1658 with a new company, and performed before King  Louis XIV  in the old Louvre building and in the Palais-Royal.

As a playwright Moliere wrote 31 plays in different styles, comedies of manners, comedies of  character,  romantic  comedy, and above all satires.  Because of his friendship  with Jean Baptiste Lully he wrote comedy-ballets,  written for royal divertissements  at the Palace of Versailles. Molière for his material drew on different  sources,  from Lope de Vega,  Spanish  and Italian  works, Commendia dell’Arte, which provides for improvisation,  and on traditional French work.

Nothing was sacred, all things were a  target of wit. The satires are  most important,  for their revelation of character, with their comments on  social  mannerisms, and affectations, on misers, hypocrites,  hypochondriacs, nobles,  pretentious men and women. Though he mocked the upper classes,  he never attacked the monarch, and indeed was a favorite of the King who protected him..

A few of his plays may be mentioned to illustrate their flavor.

Les Precieuses  Ridicules, the affected young ladies, with conversations and word games, crtitises the affected speech and ssentimentality of the pretentious, and also of the prestigious Academie Francaise .

L’Ecole  des Femmes, the school for women,  parodied the poor education  given to  daughters  of rich families.

Le Medecin Malgre, the doctor despite himself, parodies  official sciences, and pompous individuals, speaking poor Latin, to impress others with false erudition.

Le Misanthrope 1666, satirizes the hypocrisies of aristocratic society but also indicates the flaws of everyone. The misanthrope, does not  engage in real change, but he insists on the strictest honesty in all situations, and has no unbending opinions of his own.

Le Bourgeois Gentilhomme, comedy ballet  satire on social climbing, pretentious  middlel class and snobbish aristocrats. The middle class bourgeois, M. Jourdain, wanting to be an aristocrat, takes a  philosophy lesson on language, and finds that for more than 40 years “I have been speaking prose while knowing nothing of it.”

Above all there is Tartuffe ou I‘imposteur, on dishonresty and hypocrisy of an individual masquerading as  a priest to convince a naïve, wealthy aristocrat to give him his fortune and daughter in marriage, while making love to his wife,

The original version of the play was suppressed because of the opposition of the Archbishop of Paris and  the  Catholic hierarchy and upper class  who found it offensive.  Moliere rewrote it to make it seem more secular and less critical of religion Tartuffe confesses, “yes I am wicked guilty, a miserable sinner.”

While acting in February 1673 in  Le Malade Imaginaire Moliere played the role of the hypochondriac Ardan, collapsed  and died  aged 51 of pulmonary tuberculosis within a few hours at  his nearby home.  The chair on which he sat during his final role is preserved and on show in the Comedie Francaise, he was denied the sacrament of the church,  but his bust was placed in the Academy. He lives on in the theater in the heart of Paris.

But, while honoring him in his 400th year, it is arguable that Molière while important is not as great as Shakespeare.

PrevHostage Texas Rabbi and Wife said to be Allies of the Entire Muslim Community
Who Will Follow Biden Into No Man’s Land?Next