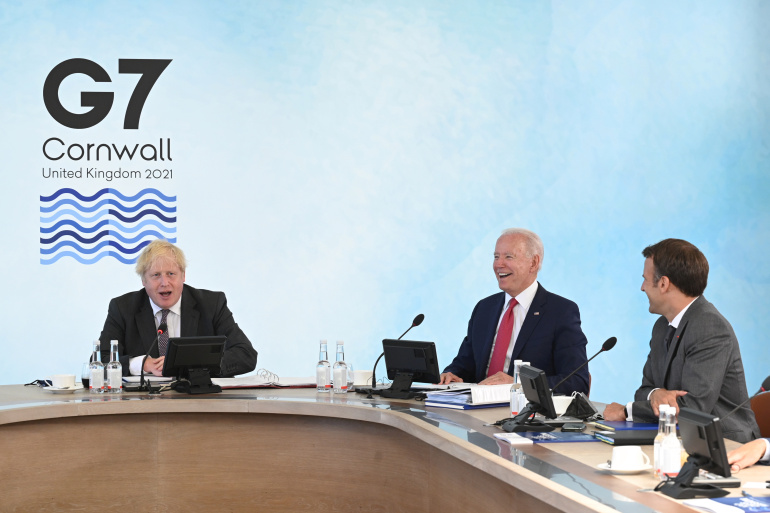 The leaders of the G7 countries meeting in Cornwall in the U.K. have pledged to gift a billion doses of the Covid-19 vaccines to needy countries.

(The Group of Seven (G7) countries are Canada, France, Germany, Italy, Japan, the U.K. and the U.S. The E.U. participates in all discussions as a guest and is represented jointly by the President of the European Council and the President of the European Commission at G7 meetings. The U.K. has also invited leaders from Australia, India, South Africa, and South Korea to attend the G7 Leaders’ Summit as guest leaders from those countries.)

The G7 leaders have determined that there will be no strings attached to this gift of vaccines and no payment is to be expected or asked for.

It’s a great humanitarian gesture and it embodies all that is best about an advanced civilisation like ours that is founded on Judeo-Christian precepts. If the vaccines ever make it to the intended recipients they will indeed go someway towards helping to lower the incidence of the disease and its spread. There is, however, a downside to this generosity.

Basically, and in quite a number of cases, this gift will reward decades of economic mismanagement, ideological rather than practical economic policies, systematic corruption, dictatorial politics and rampant abuse of human rights coupled with an almost complete disregard for the welfare of citizens.

What the G7 leaders are saying to the world whilst safely ensconced in their luxury hotel in one of the loveliest parts of the U.K. is that bad and evil leaders and politicians in some countries can carry on with their vile political businesses as usual and with their blessing.

In other words, any of the other leaders of any of the other suspect countries can carry on being as corrupt, as mired in lamebrain political philosophies, as incompetent and uncaring, as dictatorial and anti-democratic as they want and when anything bad happens, bad like Covid-19, our leaders are saying that we’ll bail you out so that you can continue to feather your own nests with G7 taxpayers’ monies and abusing your populations in any ways you choose and for whatever reasons you all believe in.

By all means transfer as many billions of doses of the vaccines to other countries as can be spared or produced for the purpose. Covid-19 is a global pandemic and a humanitarian crisis. For almost countless millions of individuals the disease is also a traumatic, personal, life changing event that causes, or has caused, desperate, deeply emotional disturbances in their lives.

Such a transfer, however, should have strings attached – should have bloody great ropes attached, actually – mandating significant improvements in behaviours or else no delivery.

As long as the pandemic rages unchecked in any country the more of a threat there is to the positions and power enjoyed by members that country’s political elite. The vaccines are so necessary, and so needed in many countries, that agreement to almost any condition the G7 leaders cared to impose would probably be agreed to.

The offending elites know it and the G7 leaders could have used that fact to impose some semblance of morality and better human rights on some of the most egregious offenders.

That, of course, is never going to happen because the current G7 leaders, with President Biden being the most notable example closely followed by the U.K. Prime Minister, are rather nasty, woolly minded individuals whose own personal morality and approach to politics and leadership is somewhat closer to the dictatorial and the abusive than we might be comfortable admitting to ourselves.

President Biden, in particular, has revealed himself to be (like most Democrat politicians) brutally and childishly nasty and in thrall to a ridiculous, and long since debunked, socialist philosophy, as well as suffering from Trump Derangement Syndrome to a marked degree. He is closely followed by President Macron of France who is simply and plainly one of the stupidest people ever to grace European politics and a remarkably horrible person who delights in being contrarian and anti-democratic whilst accomplishing nothing.

Chancellor Angela D. Merkel of Germany is by inclination, upbringing and philosophy anti-democratic and profoundly dictatorial as well as using the German republic’s security and policing institutions to harass anybody, including duly elected politicians, who dares to oppose her, or who says anything she and her minions see as unpalatable.

I often think that the U.K. has curtailed and circumscribed freedom to a large and suspect degree but I am constantly surprised by how lacking in freedom Germany actually is. The removal of many political and free speech rights has been accomplished by slowly, slowly chipping them away in small pieces that were scarcely noticed by the population until it was too late.

France, needless to say, has managed to reduce the freedoms of its population in the usual French way – huge levels of bureaucracy that turn doing, or saying and printing, almost anything into a nightmare of paperwork. Dangerously, the French elites live such separate lives from the ordinary citizen that they almost never have any contact with those they rule over and they have little, or no, understanding of the concerns and needs of the ordinary person.

I could go on – what about the obviously hard of thinking and remarkably hypocritical, anti-democratic and very nasty Prime Minister Trudeau of Canada whose highly effective press censorship through subsidies is famed, and sometimes admired, throughout the so-called free world; or the unelected technocratic dictatorship of the equally unelected Mario Draghi the “Prime Minister” of Italy. (The President of the Council of Ministers of the Italian Republic, commonly referred to in Italy as Presidente del Consiglio, or informally as Premier, is known in English as the Prime Minister of Italy and is the head of government of the Italian Republic.)

These are the sort of people currently meeting in Cornwall, and as the old phrase has it, would you buy a used car from any one of them? Not one of them, nor any of their advisors, could think their way out of a paper bag without help and all of them seem to believe to some extent in the illiberal, anti-democratic socialist view of government and world affaires.

They couldn’t spot a chance to do good if it walked up to them and slapped them across the face with a wet kipper. Ill thought out, half-baked ideas and policies are what these people specialise in.

That’s why a gift of a billion vaccines is a wasted opportunity – not because most of them may never make it to the people they’re intended for (that goes without saying) but because our leaders are so blind that they can’t even see that the pandemic and its vaccines has given them unprecedented leverage.

And that, dear readers, is stupidity and closed-mindedness on a monumentally colossal scale.

Don’t blame me – you elected them!

PrevHypocrisy of the Woke Dons
AOC Repeats Claim That Israel is an ‘Apartheid State.’ Here’s Why She’s Wrong.Next