This being the BBC they have to call him ‘far right’. However to give them their due their headline does emphasise the positive part of 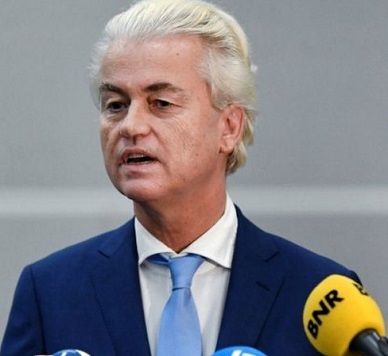 the judgment; other news outlets focus on the bit of the decision where the conviction for insulting a racial group was upheld. Also from Deutsche Welle and the Netherlands Times

A Dutch court has cleared far-right politician Geert Wilders of inciting hatred and discrimination, but upheld his conviction for insulting a racial group.

Mr Wilders was accused of leading calls for “fewer Moroccans” in the Netherlands at a rally in 2014. In 2016 he was convicted of insulting a group and inciting discrimination.

But the 56-year-old anti-Islam politician called the case a political show-trial and challenged the verdicts. He argued his comments should be protected by his right to freedom of speech.

Wilders and his lawyers argued that the case against him should be dropped, citing political interference and recent riots in The Hague and Utrecht as reasons. The OM (Public Prosecution Service) always denied any political involvement in the decision to prosecute Wilders and again demanded a 5 thousand euros fine against him.

Delivering their ruling, judges in Amsterdam said that the leader of the populist Party for Freedom had gone too far during a local election campaign six years ago when he got supporters to chant that they wanted fewer Moroccans in the country.

When the crowd shouted back “Fewer! Fewer!”, a smiling Mr Wilders responded: “We’re going to take care of that.”

This, the appeals judges said, was insulting to people of Moroccan ancestry in the Netherlands.

However, while these chants were insulting, Mr Wilders provoked them for political gain, which did not amount to inciting discrimination, the judges said. Other comments made at a market days before were unprepared comments also not aimed at discrediting people of Moroccan heritage, the court ruled.

The court also denied a portion of Wilders’ appellate defense, stating that the judges did not believe there was evidence to suggest that the Justice and Security Ministry interfered by pressuring the OM to push a harsher case against the politician. At that time the ministry was led by Ivo Opstelten. In its ruling, the court said there was no evidence that the OM lied to cover up any appearance of collusion.

“The right to a fair trial has therefore not been endangered,” the court said.

The presiding judge said Mr Wilders had “already paid a high price for years for expressing his opinion”.

The trial of Wilders, one of Europe’s most prominent far-right leaders, has been seen as placing the right to freedom of speech against the right of ethnic and religious minorities not to suffer verbal abuse and discrimination.

Wilders said on Twitter ahead of the verdict that his appeals trial would decide if the Netherlands had “become a corrupt banana republic where the leader of the opposition is sentenced in a political trial.”  He said the judgment was being handed down at a heavily secured court near Schiphol airport “while Moroccans who set our cities on fire usually get away with it and never see the inside of a court.”

PrevOne Israeli General Who is Unworried by the F-35 Sale to the UAE (Part 2)
Drain the Swamp, Or Be Drowned By ItNext