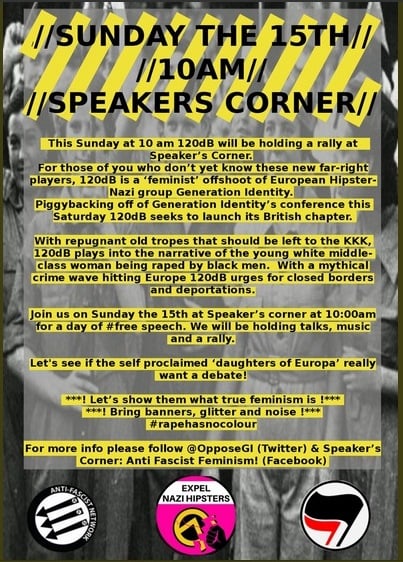 To Hyde Park to see Annika Franzisk of 120Db and Generation Identity speak at Speakers Corner. On the plaza by Marble Arch an Anglo-Philipine demonstration in support of President Duerte was taking place. They had a good pa system and their songs were lively.  I could see two groups with a police cordon between them. I went first to look at the group who from their small and puny stature, masks and black clothing I took (correctly) to be the group of Anti-fascists and Anti-racist Feminists who oppose free speech and deny the assaults and rapes on women and girls from Cologne to Rotherham and Telford. They had advertised their protest this morning thus. Left.

I like a bit of music, colour and glitter. 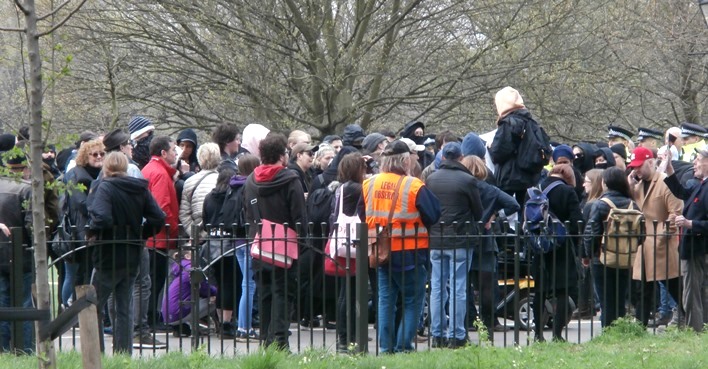 This young woman, her features obscured by a peaked cap pulled low under the hood of her track-suit top was making a speech about women. Sadly, as was the case every time I have been to Speakers Corner  the conditions mean that it is hard to hear a speaker unless he or she is talking directly at one. Amplification is not allowed and the regulations were devised at a time when speakers had booming voices, trained to reach the back of the church or school hall without artificial amplification (as it hadn’t been invented then) and few modern speakers can project so well.

I decided to now take a look at Generation Identity The police officers holding the gravel path between the grass asked me who I had come to hear and then directed me to the right hand path. 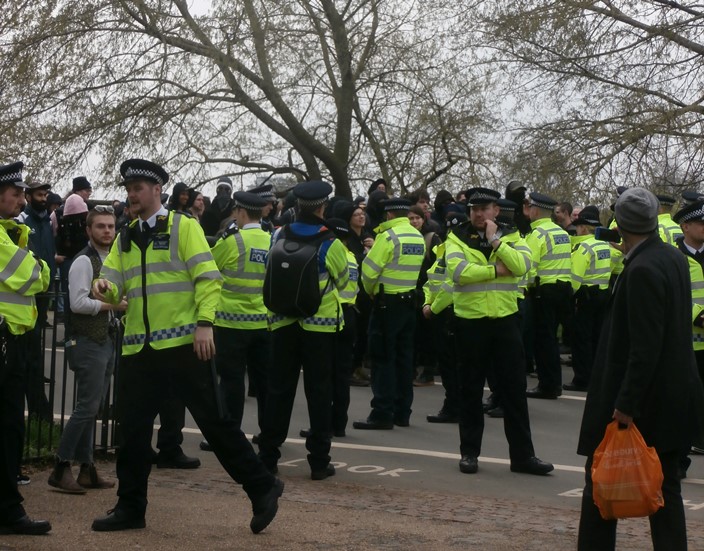 I believe this to be Annika Franzisk. As you can see, she, like all of Generation Identity and those who had come to listen to their speeches have their faces uncovered. They are not ashamed to stand up and show what they believe in.

There were further speakers. One young man detailed what generation identity were about; other open-faced young activists handed out flyers. Meanwhile Antifa (whose music consisted of two drums and a maraca) made a din trying to drown out the speeches and chanting their usual chants. 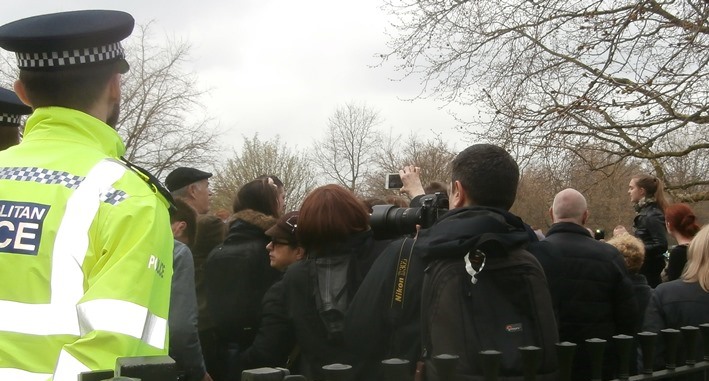 Oh, it did take me back hearing “Nazi scum, off our streets” again and
” Why don’t you,
follow your leader.
Shoot yourself,
like Adolph Hitler”

This young man was reading a speech. I believe it may have been one of the speeches intended to be delivered by either Martin Sellner of Austria or Bodi Abdel of Hungary. It might come up on the GI facebook page later. It does matter what was said – I would be a fool to suggest that it doesn’t. But in the context of Antifa and the authorities trying to restrict what we say, it matters more that it was said, not that with the wind, the distance and the crowd I didn’t actually hear it. 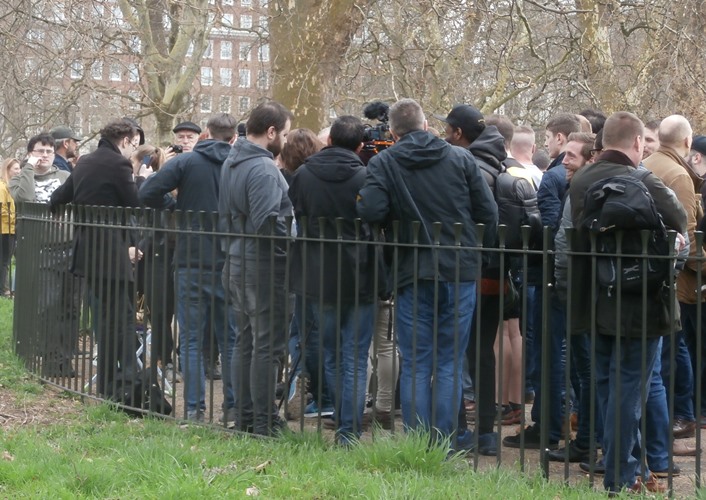 While GI were finishing their speeches the police rounded Antifa up and took them north of Speakers Corner towards Marble Arch. You could hear their progress from the sound of the drums. GI dispursed and from what I could see many of them made their way eastwards towards Victoria gate.

I could see other speakers setting up ready to say what they wanted to whoever was there to listen. This man was interesting. He and his two companions set up their stepstool (the modern equivalent of a soapbox) alongside the Antifa line. Their banner said ‘Justice for Men and Boys’ from which I expected something on the lines of the group Families need Fathers. His first subject was addressed towards and about Antifa. “These are anarchists,” he said. “How have anarchists become part of the establishment, you ask? When they take the money, are financed by millionaires whose goal is to protect the establishment by stifling free speech!”
“Do this lot look like they are being bankrolled by Millionaires?” asked an older woman.
His answer was that they may not be benefiting personally but their resources and facilities certainly do. 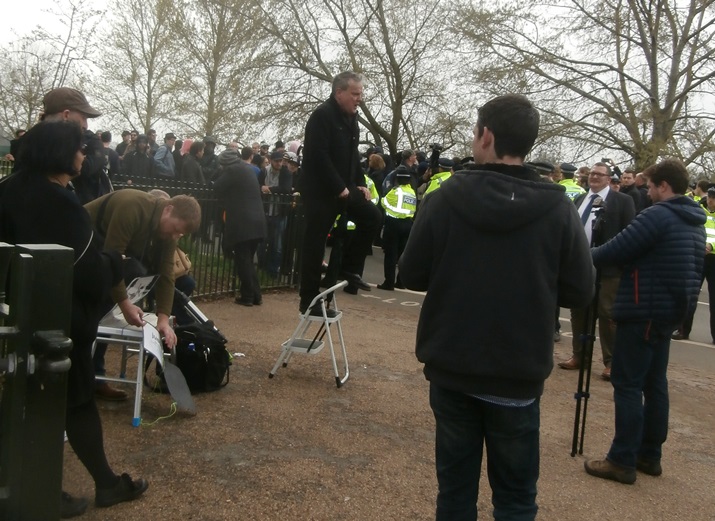 The notorious dawa stands, that have attracted the mass prayer and driven many bystanders away were just starting to set up.

And there was a sprinkling of the more traditional speakers with causes that concern them. The state of multiculturalism, Julian Assange, police corruption at home and abroad, the flaws of Islam. 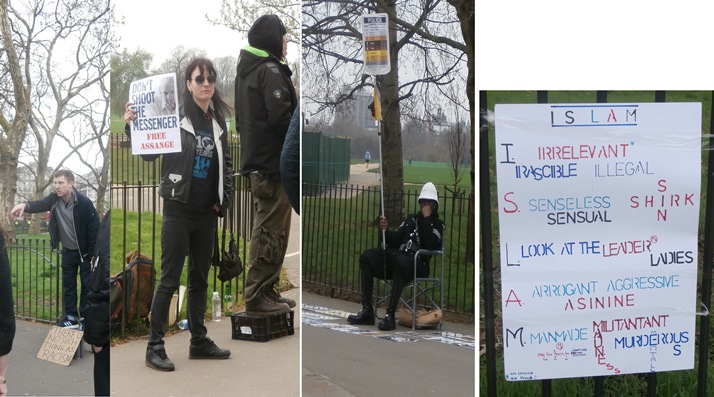 I decided to follow the sound of the drums
(Do not fear the drums. Fear what happens when the drums stop.
Why, what happens then?
Guitar solo!)

I could see Antifa, with their black, red and white flag (who else used to have a black red and white flag? begins with a N, ends in a i, has a z in the middle?) being led across the Marble Arch plaza past the singing Anglo-Phillipines pro Duerte rally. I caught up with them as they were being led down Oxford Street (for those unfamiliar with London it is probably London’s prime shopping street – not as exclusive as Knightsbridge, or expensive as South Molton Street, but where ordinary people shop for something special) 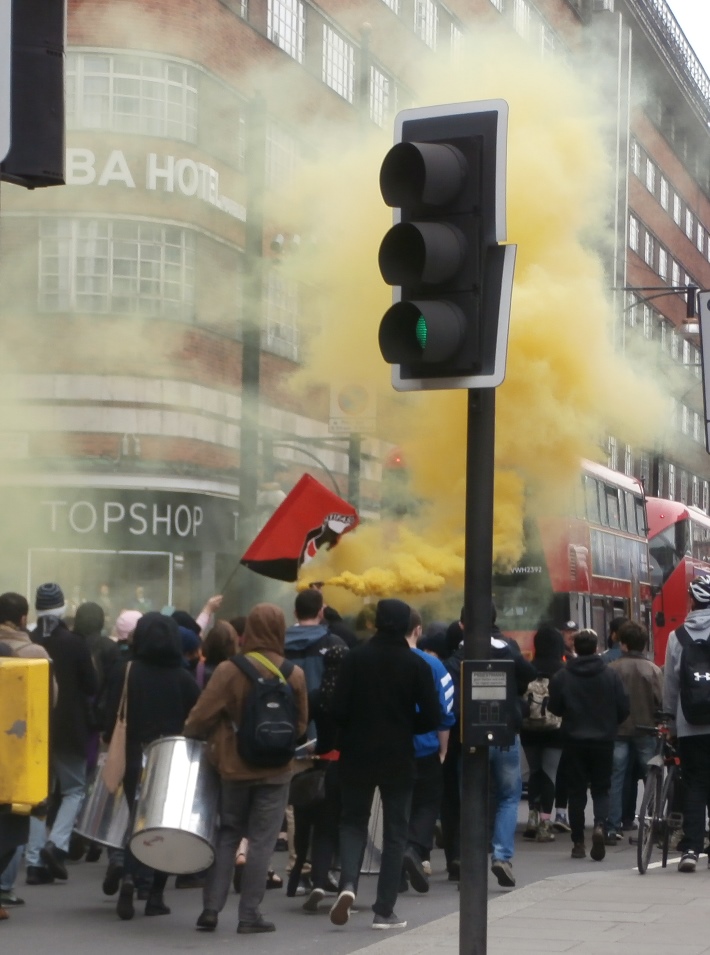 That yellow flare did not go down well with two Chinese ladies walking alongside me, or the driver of the bus in the other carriageway.

That is Selfridges the famous Department Store 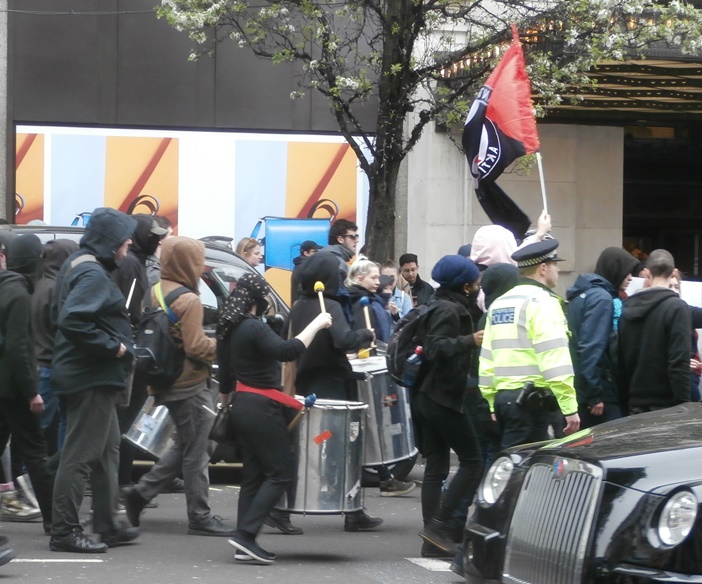 They were told to bring glitter and colour; even the English Disco Lovers, the gay group who used to counter the EDL had a mobile glitter ball!

On their Twitter page the Anti-fascist network are claiming that they ejected Generation Identity from the Duke of York pub and intimidated the landlord of the pub into making a donation of his profits to a refugee charity. However the last time I saw GI they were walking in completely the opposite direction. I left Antifa being led down the side street by Selfridges, at which time they were very firmly corralled by the police.  The Duke of York is part of a national chain – I don’t imagine the manager has any discretion to give away profits on the say so of a bunch of roving scruffs.

I will add links as and when they go live.